* To supplement Independence Day celebrations, the Daily Times will highlight, all of August, the individuals who continue to make Pakistan proud. Our 13th interview is with philanthropist and prominent curator of arts Yousaf Salahuddin 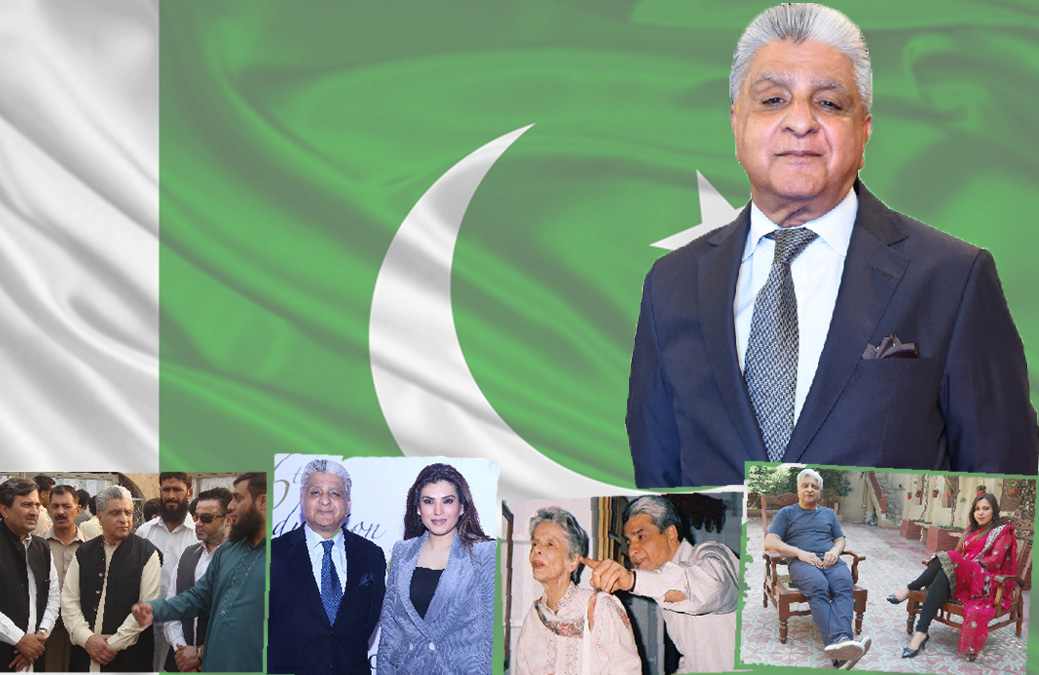 Tell us about your foray into culture preservation, curating arts and promoting music. How did it all begin for you?

Many people see me through the prism of music because I host a programme on music known as ‘Virsa’ but let me clear that. My mission was not to create music. My mission is only to bring the youth closer to our identity, ideology, history and culture and I used the medium of electronic media to inculcate our heritage and culture among the youth through music. The Sufis disseminated the message of Islam in the sub-continent by not using the swords but through music and therefore I also opted the medium of music for my mission of educating our youth with our identity and culture.

Most of the people call you the ‘Cultural Guru’. You are attributed to discovering many singers and actors. Who do you think has been your biggest discovery?

Pakistan has a lot of talent in the fields of music, art, dance and painting but there’s no one to hold their hands and therefore I go personally wherever I see a glimpse of talent in anyone. Some people from our youth also approach me directly as more than 60 people sent me their videos made in connection with Independence Day and I called most of them for the recording of August 14 event. I think my biggest discoveries are Sahir Ali Bagga, Sanam Marvi, Hina Nasrullah and Sara Raza Khan as all of them got acclaim through my ‘Virsa’ programme. Actually, Rahat Fateh Ali Khan can also be termed as my discovery because he started qawwali with me and his all the famous qawwalis were recorded at ‘Virsa’.

Tell us about ‘Virsa’. How much do you think the programme contributes to reviving the heritage of Pakistan?

I’ve been hosting ‘Virsa’ for the last 12 years and it proved to be a successful project undoubtedly because we managed to inculcate the true heritage and culture of Pakistan among our youth. I made a YouTube channel for the performances of ‘Virsa’ at one place some one year ago and we have crossed 100,000 subscribers so far in this time. The YouTube management sent us a letter on achieving 100,000 subscribers of ‘Virsa’ and its statistics are very interesting. People aged between 25 to 34 years topped the list of its viewers while people aging between 18 to 24 years remained second and people aging between 35 to 44 remained third in the list of viewers. The demographics also show that ‘Virsa’ was viewed the most in Saudi Arabia followed by the India and Pakistan respectively. Interestingly, it has more following in India on YouTube than Pakistan. Recently, Rahat Fateh Ali Khan was awarded with a doctorate degree by the Oxford University and all the performances he gave there were originally made by the ‘Virsa’ and he presented the true culture and heritage of Pakistan in the Oxford through his performance.

Pakistan has a lot of talent in the fields of music, art, dance and painting but there’s no one to hold their hand and therefore I go personally wherever I see a glimpse of talent in anyone

You host many Bollywood filmmakers, actors and artists in your Haveli from time to time. How much do you think that it helps in strengthening or improving ties with the neighbouring country? What is their perception of Pakistani arts?

Our dramas are widely seen in India and they also appreciate our dramas. As far as the improvement in ties between two countries are concerned, it is much difficult to predict any positive thing in these circumstances because situation is at the lowest level due to the ruthless step of India abolishing the special status of Kashmir. The situation is horrible in Kashmir and the secularism has been killed by India. The clouds of war are hovering between the two nuclear armed states which is really unfortunate.

You have made numerous efforts for the revival of Basant. You were included in many committees constituted on Basant. As we all know that Prime Minister Imran Khan is your personal friend. What are the hindrances in the way of this historical festival? Have you talked to the PM on Basant?

I am the member of the committee constituted to make arrangements for Basant and we are trying hard to make possible this cultural festival. The ban on Basant is a big loss of Pakistan because a huge foreign exchange used to come here when Basant was a regular festival as it was a great charm for hundreds of foreigners to celebrate Basant in Lahore because you cannot find even a single festival like Basant of Lahore in the whole sub-continent. This festival is being celebrated in the whole Punjab except for Lahore and it is really unfortunate because the original Basant was attributed with Lahore in the past due to the festivities associated with it. I have talked to the Prime Minister and he is also in favour of celebrating Basant but he is scared of the possible lives lost due to the accidents associated with the kite-flying. No PM takes decision without consulting the administration and our administration paints a scary picture of Basant. We have many options to avoid accidents of kite-flying including putting a ban on motorbike only for 24 hours while also limiting it in the walled city where the chances of accidents are very low due to the high-roofs buildings where the string of kite doesn’t fall on the roads. We’ll have to defy the ban on Basant one day if this festivity isn’t allowed by the government.

How passionately do you feel about Lahore? If you were made PM for a day, what three things would you do first?

Well, I never had a feeling to become a PM for even a day because I can’t do politics. Lahore is my love and especially the walled city where I was born and grew up in this Haveli. I love every part of my country but have special feelings for this majestic city of Lahore where I have lot of memories associated with it.

How do you divide your time residing in your home in Gulberg and the famous Haveli Baroodkhana? Don’t you feel any problem shuttling between the posh area and walled city?

Not at all. I love going to both places. I am here at Haveli but go for dinner every day at my mother’s home. I also go for gym there where I have lot of friends in Gulberg. So, it has become a routine for me and it doesn’t bother me at all.

I recently made a national song “Aye Watan Aye Watan” with Rahat Fateh Ali Khan and also recorded a programme for the Independence Day. Many projects of music are also underway. I am also the Chairman of the Heritage committee of Lahore and member of the PTV board and Lahore Museum. So, different tasks in many projects.

You were once active in the politics as you remained MPA, member of the Shura and also enjoyed the status of a provincial minister. Do you feel that you were failed in the politics and quit it despite the fact that many notables of your family remained active in politics? Has Imran Khan ever asked you to join PTI?

I couldn’t do much in the politics as I was failed in it and I realised that politics isn’t of my type these days because corruption has been deeply rooted in our politics. Gone are the days when our ancestors were active in the politics and took part in the freedom movement because those were good days. Imran Khan knows me very well and therefore he’ll not ask me to join politics again and I don’t want him to ask me to join it again.

You are the maternal grandson of legendary poet Allama Iqbal. Your paternal grandfather has been the mayor of Lahore. Growing up, did you ever feel a sense of responsibility to try and live up to such big names?

I am doing all these things just because of this very sense of responsibility associated with me due to my family relationship with these big names. My grandfather Mian Ameeruddin was the Chairman of the Pandal Committee for the March 23, 1940 Jalsa of Quaid-e-Azam in which the Pakistan’s Resolution was passed. My father was among the main organisers of the Jalsa of 23rd March and I still have that carpet used for the stage of Quaid-e-Azam. This Haveli was the centre of all the important meetings of Muslim League during the freedom movement and many notables of that time used to visit it regularly including Quaid and Iqbal just because of the contribution of my ancestors.

I don’t think so that I have achieved much. This country has given me a lot and therefore I only try to pay back it through my work and passion.

Yousaf Salahuddin is a strong advocate of protecting and promoting arts. He is a figure in the city’s arts and culture circles who is credited for reviving Basant festivals and organising various musical, artistic and poetic gatherings; the popular entertainment and music show ‘Virsa – Heritage Revived’ broadcast on PTV is personally hosted by him. He has been playing a critical role in reviving and promoting the cultural heritage of Pakistan.

Salahuddin is known as the Cultural Guru for many reasons. He has been hosting ‘Virsa’ for the last 12 years and it proved to be a successful project as he managed to inculcate the true heritage and culture of Pakistan among our youth. Its YouTube channel has crossed 100,000 subscribers. He recently made a national song “Aye Watan Aye Watan” with Rahat Fateh Ali Khan and also recorded a programme for the Independence Day. He is also the chairman of the Heritage Committee of Lahore and member of the PTV board and Lahore Museum. He’s the member of the committee constituted to make arrangements for Basant and is trying hard to make this cultural festival possible.

Some of Salahuddin’s biggest discoveries are Sahir Ali Bagga, Sanam Marvi, Hina Nasrullah and Sara Raza Khan. He says Rahat Fateh Ali Khan can also be termed as his discovery because he started qawwali with him and all his famous qawwalis were recorded at ‘Virsa’