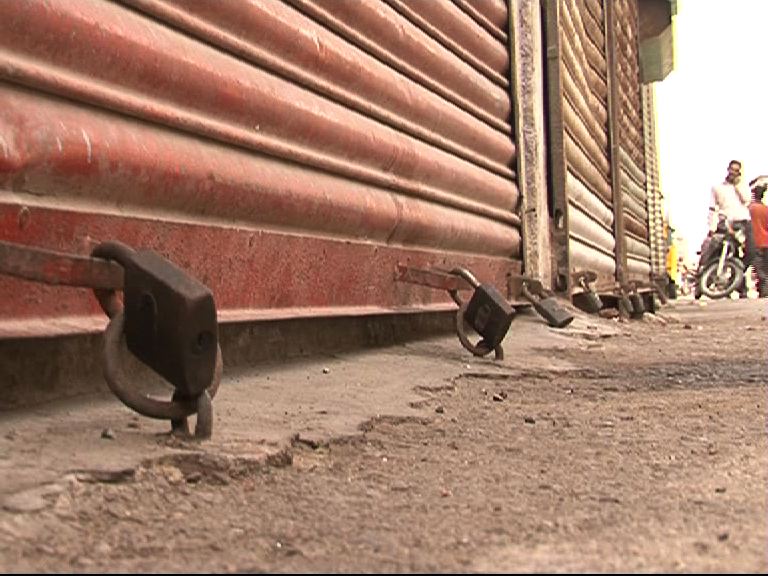 In a protest against Indian atrocities and abrogation of Article 370 by the New Delhi’s government, a complete shutter-down strike will be observed across Azad Jammu and Kashmir today (Tuesday).

The AJK government also announced to hold mass protest against India on Tuesday. According to the details, political parties, lawyers, traders and civil society will hold protest demonstrations against India in different cities of AJK.

Earlier in the day, Azad Jammu and Kashmir Prime Minister Raja Farooq Haider had said that all units of Pakistan were united over the issue of Kashmir and India would be given a befitting response in case of any misadventure.

The AJK prime minister had said India was using different tactics to make occupied Kashmir its part. He said India was carrying out propaganda against Pakistan at the international level and it was high time to counter that propaganda through effective strategy.

Meanwhile, people from all walks of life in Lahore strongly protested the revoking of Kashmir’s special autonomous status by the Indian government. They also staged several rallies in the city to protest the latest move of the Modi government. The Indian government abolished the special status of IHK through a presidential decree that was in violation of the resolutions of United Nation Security Council. The Indian government has now created a curfew-like situation in IHK to avoid any protest or rallies by Kashmiris. On Monday, hundreds of people from civil society gathered on The Mall to protest against the atrocities of the Indian government in Kashmir while showing solidarity with the people of IHK. They were also carrying banners and placards against Indian PM Modi while chanting slogans demanding freedom for Kashmir. Napoleon Qayyum, Executive Director of Pak Center for Law and Justice (PCLJ), said that it is evident from the world’s history that a nation is freed when cruelty and injustice exceeds a certain point and the same is being done with the Kashmiri people. “We are here today with the civil society to show our solidarity with the people of Kashmir who are eagerly waiting for our support,” Napoleon said.

A large number of political workers and lawyers also gathered outside the Lahore Press Club to show solidarity with the Kashmiris, while condemning the brutal acts of Modi. Addressing a large rally at Press Club, PTI Punjab President Ijaz Chaudhry said that it was the blackest day in the history of whole subcontinent as India revoked the special status of Kashmir. He was of the view that PM Imran Khan had frequently talked about the freedom of Kashmir in his speeches throughout the year and Pakistan would show diplomatic courage this time to respond to the brutalities in Kashmir. “We demand the release of all the leaders of Kashmir who are incarcerated in the Indian jails in violations of the basic human rights,” he said.

On the other hand, the Punjab University expressed solidarity with the people of IHK and condemned the change of its status by India. In this regard, a meeting of teachers, employees and students was held in Al Raazi Hall, presided over by PU Vice Chancellor Prof Niaz Ahmed. Pro VC Prof Dr Saleem Mazhar, Academic Staff Association President Prof Dr Mumtaz Anwar Chaudhry, Secretary Javed Sami, heads of various departments, employees and teachers participated in the meeting.

Speaking on the occasion, Prof Niaz Ahmed said that the success of Prime Minister Imran Khan’s recent visit to the US had created panic in India and the Indian government was much worried over Pakistan’s ongoing successful diplomatic efforts over Kashmir issue. “We want to tell India and the international community that we are united on the Kashmir issue.”

He said that PU teachers, employees and students would highlight the Kashmir issue at every forum. He said Indian forces were ruthlessly using cluster bombs on children and old people in IHK and the international community should immediately take serious notice of the human rights violations in the occupied territory.

Similarly, the staff and students of Government College University, Lahore, strongly condemned the revocation of the special status of Kashmir. Addressing a gathering organised by the GCU Debating Society, the university’s orators said they stood in solidarity with the people of IHK who were braving the most brutal genocide perpetrated by Modi-led Indian government. “We vehemently condemn the human rights violation of the innocent civilians at the hands of Indian army. We also condemn the unlawful violations of the Line of Control and cruel targeting of the civilians living on the Pakistani side by the Indian army,” they said, according to a statement.