Jahangir: the perception and the reality — Part III 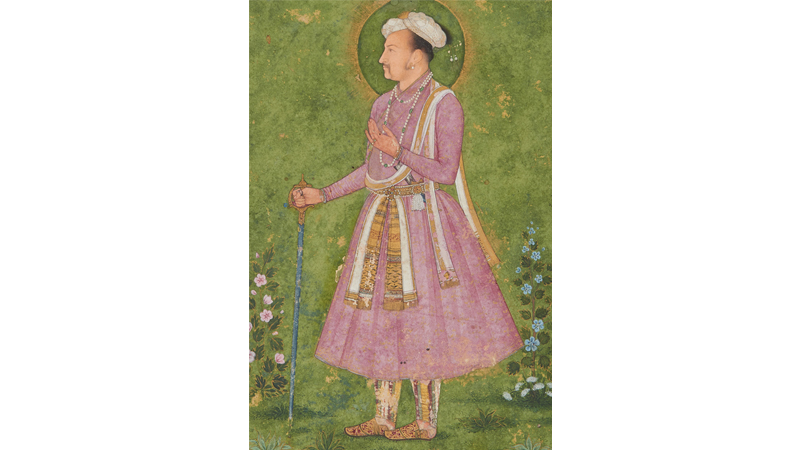 The mausoleum is an elegant and well laid out building, keeping in with the Mughal traditional architecture. Kanhaiya Lal Hindi describes the beauty and grace of the building as, “The architect himself is taken aback by the beauty, elegance and solidity of the structure. In 1037 this building was constructed on the orders of Shah Jahan. Chandeliers, candle holders, lamps, floor spreads worth millions, suiting the royal rank, were used to decorate the building. This tomb has six levels. The level that houses the grave of the Emperor is octagonal and dome shaped from the inside. The building is made of marble. In the centre there is a well shaped marble podium which is 13 feet wide and, 9 feet wide, and 1 and a half feet tall. In the centre there is an exquisite cenotaph, cut out of a single piece of marble which is two and a half feet high, quarter to two Duraa long and 10 Girah wide. The podium and cenotaph are inlaid with Carnelian, Lapis Lazuli, Sapphire, Serpentine Stone, Coral, variegated marble and other precious stones.”

The 99 beautiful names of Allah are inscribed on its sides. At the head is Arabic Inscription which translates into following, “Allah is the only one worthy to be worshipped. He knoweth what is concealed. And what is manifest and He is Merciful and Compassionate. At the foot is the following Persian inscription, The illuminating resting place of His Majesty, the asylum of mercy.”

The building isn’t grand like Taj Mahal, but as Ana Suvorova has said, “It is impressive because of its perfection, clarity of proportions and layout, harmony of different parts, and the architectural saturation of surrounding space. The polyphony of the different elements-masses, volumes, materials, forms, and ornaments-constitute a grand and powerful orchestra.”

Ana Suvorova gives a unique perspective about the structure, “The most attractive aspect of Jahangir’s tomb is its location-its situation in the surrounding regular garden. The mausoleum opens itself up to the visitor gradually, as he walks through the park. The building is hidden in the far section of the garden and appears, from time to time, in the distance at the end of canals and walk-paths and behind fountains and trees. This architectural idea, remindful of this earth before God’s greatness, permeates the whole ensemble with its memnto mori mood, characteristics of certain genres of classic Mughal poetry.”

The splendour and grandeur of the mausoleum endured until the times of Aurangzeb. After him, as the empire declined, the majesty of this monument also slowly waned. Kanhaiya Lal Hindi described the misfortunes of this edifice during the Sikh Era as, “In Sikh era the Maharaja turned his attention towards this building as well. He ordered that the pillars on the parapets used for lighting candles and marble lattices should be pulled out, transported to Amritsar and be used to adorn Darbar Sahib. The order was carried out post haste. A large quantity of stone was removed and transported to Amritsar. The building was white washed. Arjun Singh son of Sardar Hari Singh Nalwa lived in this building for a while. He also removed stones and marble lattices from the structure. When Sardar Sultan Muhammad Khan who was brother of Sardar Dost Muhammad Khan Amir of Kabul, had a falling out with his brother, he came to Lahore. The Maharaja gave him the town of Shahdara as his fiefdom. He lived in this mausoleum for a few years. The uncouth Afghans of his forces immensely damaged the structure. They removed innumerable precious stones from the inner walls, broke many stones and laid the garden to waste. Right till the end of Sikh era, this building bore one after another, damage. Lattices, slabs of Marble and Red stone, worth millions were taken away.”

This mausoleum housed a French officer of Ranjeet Singh’s army, Senor Oms who was also known as Musa Sahib, as well. The building was also damaged due to fire a number of times. There was once a magnificent Baradari on the eastern side of the building, which was eroded by the waters of river Ravi. The original construction had twelve water tanks; one of these tanks was also claimed by the river.

The start of British rule wasn’t kind to the mausoleum as well. The adjoining Akbari Serai with its numerous rooms led to the decision of converting Jahangir’s Tomb into a Railway station. Fate, however, had other plans and the tomb was spared this indignity. In order to show-off magnanimity of the Empire, the British revisited this decision. They even sanctioned an amount of Rs 12,500 for the renovations. The decision to lay the track unfortunately prevailed and consequently it was laid between the tombs of Jahangir and Noor Jahan. The tomb of Jahangir, Serai, Shah Jahan Mosque and the tomb of Asif Jah remained on one side while the tomb of Noor Jahan got separated from the other buildings. Along with the railway line human dwellings cropped up and more roads were constructed. The tomb may have been spared but the track paved the way for future destruction of these buildings especially Noor Jahan’s tomb.

When Sardar Sultan Muhammad Khan who was the brother of Sardar Dost Muhammad Khan, Amir of Kabul, had a falling out with his brother, he came to Lahore. The Maharaja gave him the town of Shahdara as his fiefdom. He lived in this mausoleum for a few years. The uncouth Afghans of his forces immensely damaged the structure

Until the 1980s, the locality of Shahdara could only be accessed by personal transport or tongas. The tonga is now just a relic of past and the musical tip-tap of the horse hooves, has now been replaced with deafening sounds of smoke emitting traffic. At present moving onwards from the bridge on Ravi which was constructed after the partition, one finds the settlement of Jahangir Town. A few years ago there were many old houses and havelis which are no more now. This town surrounds the mausoleum. The residents of Shahdara refer to this area as Jahangir ka Qila. Although it has become a residential and commercial area but still as one moves onwards it seems that one has stepped back into the Mughal Era. The original entrance of the tomb which was in the south has now been closed. This gateway stands desolate, a silent witness of the havoc wrought by time. One can still see delicate marble work at places. The door of Akbari Serai, now serves as a common entrance for Jahangir’s tomb, Serai-e-Akbari, Shahjahni Mosque, and Asif Jah’s tomb. There is also a Ticket Booth in the same door.

Right in front of the entrance, stands the Serai-E-Akbari. On the left there is the elegant Shahjahni Mosque. Towards the right of the Serai there is the tomb’s own entrance. This whole building is made of Sung e Surkh. A takhtgah mausoleum, it is placed on an enormous takht. Four minarets topped with marble cupolas, stand tall on the four corners.

Syed Latif observed, “A covered staircase of twenty five steps on each side of the quadrangle leads to an imposing and splendid platform of tessellated pavements, at each corner of which is a minaret four storey high, inlaid with zigzag bands of variegated marbles and magnificent blocks of yellow stones and capped with a cupola of white marble rising to the height of ninety-five feet, and a winding staircase with sixty steps.”

One can still get a splendid view of Lahore from atop the minarets of the tomb. A view of the boundary of the tomb, which resembles that of a fort, from this height is quite fascinating. Traces of aqueducts that which were used to channel water to the nine wells of the tomb can still be seen atop these walls. These wells were used to provide water to the fountains and gardens of the other adjacent buildings as well. It is entirely possible that there were more wells that supplied water to the whole of the complex. One can also get a glimpse of the River Ravi from these minarets , that was once a magnificent channel for small ships and is now reduced to a mere filth ridden drain. The setting of these minarets is really clever; whichever minaret you look out from you would only see three minarets of the Badshahi Mosque. Correspondingly, if you ascend any of the four minarets of the Badshahi Mosque, you would get to see only three minarets of the tomb. The mystery of this architectural nuance is a mystery still. The rooftop and these minarets aren’t open to the general public. Only dignitaries are taken up there.

In the eastern side of the tomb there is a two lane walkway that is adorned with fountains and cypress trees. Water for the fountains was supplied by the wells outside of the garden. There are ponds around the tomb that are generally dry but when there is a foreign visit they return to their former glory. Steps lead up to the podium of the mausoleum. Courtyard and arches provide access to the central cenotaph. The arched doorways are decorated with exquisite artwork. The western doorway is opened for entry of the general public. Arched galleries surround the podium which also had rooms reserved for the visitors. The galleries are richly decorated with marble mosaic representing flowers and Quranic verses. These rooms have still retained old Kashikari. The floor of the tomb, on which cenotaph rests, is beautifully adorned with mosaic. On the top of the cenotaph Quranic verses are inscribed. Its sides are covered with elegant flowers of mosaic. A look at this exquisite cenotaph invokes the feeling that it is a befitting tribute to the Emperor of the Hindustan.

This tomb has remained a part of international heritage ever since the British era. At present the mausoleum, along with the Akbari Serai and the Tomb of Asif Jah, are part of an ensemble currently on the tentative list for UNESCO World Heritage status. It has a significant cultural importance as well. Many fairs were arranged here commemorating different seasons. The place is a major tourist attraction. The people of Lahore and surrounding areas come here for picnics and outings. They come here, have fun and leave. Almost daily, students of some educational institution come here but majority of them and perhaps even their teachers are unaware of the history or significance of this place. Until the 90’s this was a major place to visit, especially during the monsoons. Swings were attached to the trees. Mangoes and traditional foods like aloo paratha, baisnee roti, qeema naan, were among the favourite picnic items. Now these have been replaced with fast food. These visitors are a steady source of reasonable income for the mausoleum. This building is relatively well preserved. One of the reasons could be that this tomb along with Shahi Qila and Shalamar Garden is a favourite visiting place of the Arab Princes who come to Pakistan. Unfortunately the nearby tombs of Nur Jahan and Asif Jah are in a very dilapidated state. The government could build an underpass or an over head bridge to connect all these buildings and pay some attention to the restoration of this national heritage that is fading away with time.

After visiting the place, as one turns back and takes a last look at the tomb, these words come to the mind, “Emperors die, empires fall and monuments crumble, what remains of a man but his footprints on the sands of time.” *