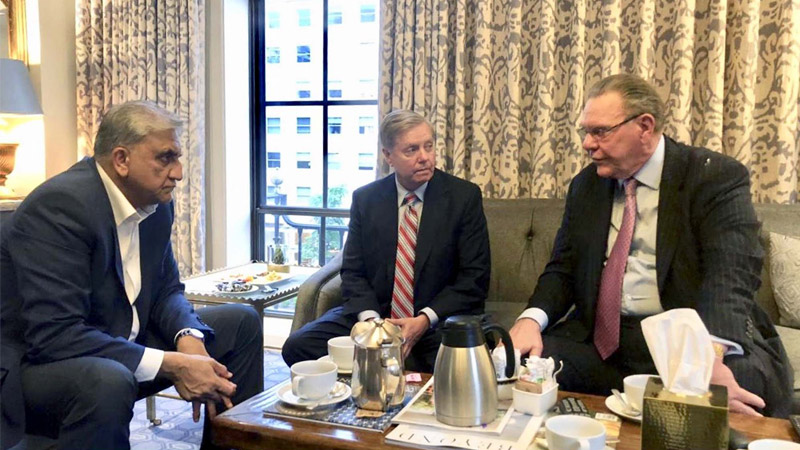 According to the army spokesperson, during the meeting the two leaders discussed regional security issues and the Afghan peace process. In the meeting, the importance of an Afghan-led process and Afghan-controlled solution were noted, according to the ISPR. “Pakistan attaches great importance to restoring a robust bilateral relationship based on mutual respect, trust and shared values,” the DG ISPR quoted the COAS as saying.

Regional security situation and bilateral military cooperation between Pakistan and US dominated the discussions between Gen Bajwa and US military leadership. “US leadership acknowledged contributions of Pakistan Army in the war against terrorism and [its] role towards the Afghan peace process,” Maj Gen Ghafoor shared on his official Twitter account.

In a meeting with US Senator Lindsay Graham and retired US Gen Jack Keane, the army chief said that healthy relations between both countries are important for regional stability. “Bilateral relationship holds potential for both countries and will also assist in regional stability,” Gen Bajwa was quoted as saying. He briefed Graham and Keane on the improved security situation of Pakistan and also highlighted the ‘resulting opportunities’ for foreign investors.

Gen Bajwa also paid homage to US national heroes at the Arlington National Cemetery, where a special ceremony was held during which the national anthems of both countries were played.