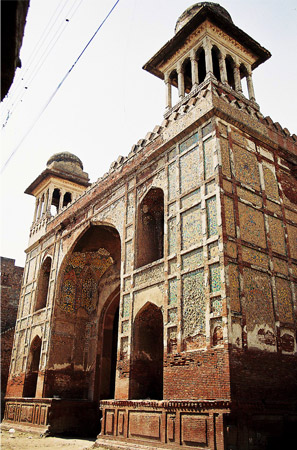 In front of the Kabuli darwaza towards north on the main road, lies Takiya Bhalo Shah Faqeer.

After that there is mausoleum of Zaib-un-Nisa Begum and a mosque made of Sung-e-Surkh. There are two small chambers here. Zaib-un-Nisa’s headstone carries this engraving in Khat-e- Sulus.

Another very compelling and reliable reference in this regard is found in Sir Syed Ahmad Khan’s distinguished book Asaarul Sanadeed. There is a table in volume 1 of this book that mentions the tomb of Zaib-un-Nisa Begum at number 99. In volume 3 at number 45 the arrangement of the grave’s headstone is given. In the same volume Sir Sayyed Ahmed Khan notes further, “Zaib-un-Nisa Begum was the eldest daughter of Aurangzeb. She died in 1702 and in the era of Aurangzeb her tomb was constructed along with a mosque. This tomb was in the vicinity of Kabuli Gate in Delhi. When railway tracks were laid down, both the tomb and the mosque were demolished.”

The reputed historian Lucy Peck mentions in her book Lahore – the Architectural Heritage, “Mian Bai, the lady who was given Chauburji, was also charged with looking after the garden at Nawankot and was supposed to have been buried there. Like the Chauburji, it is also traditionally believed to have been built by Zebunnisa as her tomb and garden, but she was in fact buried in Delhi.”

Jadu Nath Sarkar is also of the view that she died in Delhi and was buried in the ‘Garden of Thirty Thousand Trees’ outside the Kabuli Gate. Later on when the British laid down the Railway line at Delhi, her tomb was demolished, and the coffin and the inscribed tombstone were shifted to Akbar’s Mausoleum at Agra. We have recently conducted numerous interviews with the residents of Delhi who have been living there for past many generations. They have also confirmed this analysis that Zaib-un-Nisa was in fact held captive in Delhi and was buried there as well and that her remains are now housed in Akbar’s Mausoleum at Agra. 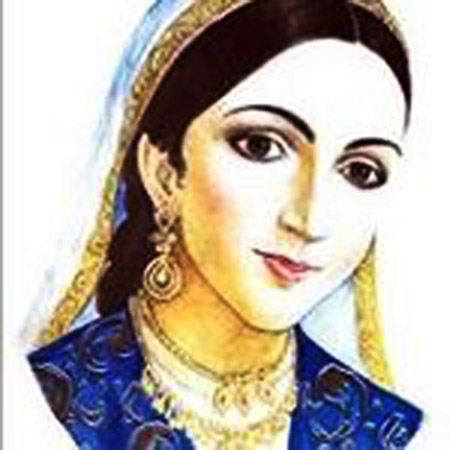 Along with these references if we look at the traditions of The House of Taimur, we find two distinct customs regarding the burial of their ladies; firstly they usually buried the ladies of the family in the capital. Secondly these ladies were buried in the basement and on the ground floor the place of the grave was marked with a sarcophagus, like the graves of Noor Jahan, Ladli Begum and Nadira Begum in Lahore; Mumtaz Mahal in Agra and Maryam Zamani in Fatehpur Sikri. All of these ladies were buried in the basements and their graves were marked on the ground floor with marble sarcophaguses. We don’t find any basement in the tomb that is attributed as the last resting place of Zaib-un-Nisa Begum nor is there any reference of underground grave or basement in any of the old books that give details about the tomb in question.

The question now arises, who is the resident of this mausoleum at Multan road? The architecture of this building is quite different from the style of other structures of Aurangzeb era. Many historians have carried out research to answer this question. They believe that this tomb could belong to a Noble lord of Shah Jahan Era, Afzal Khan Al’lami.

In this regard the following passage from Naqoosh Lahore Number is quite enlightening, “The locale of Nawankot was an important civil station in the period of the House of Taimur. Its boundary wall, turrets of the gardens, pavilions, remains of the palaces and the graves in the environs; all prove that in those days this area was a hub of activity and hustle bustle. All of these buildings were constructed within a period of one to two years and they encompass all the distinct qualities of the architecture of Shah Jahan Era. The dome and floor of the Zaib-un-Nisa’s tomb do not possess the features of Aurangzeb’s Era. This shows that this structure is not a monument of Aurangzeb’s time but that of Shah Jahan’s period.

The reputed historian Lucy Peck mentions in her book Lahore — the Architectural Heritage, ‘Mian Bai, the lady who was given Chauburji, was also charged with looking after the garden at Nawankot and was supposed to have been buried there. Like the Chauburji, it is also traditionally believed to have been built by Zebunnisa as her tomb and garden, but she was in fact buried in Delhi’

A scroll of history shows that during Shah Jahan’s period, four prominent nobles passed away in Lahore. First was Ali Mardan Khan, second was Asif Jah, third was Nusrat Khan and the fourth was Afzal Khan Al’lami. Out of these we find mausoleums of the former three in Lahore but Afzal Khan Al’lami’s tomb can’t be located. He died in 1048 AH. The Emperor was in Kabul at that time. On his return he visited the relatives of Afzal Khan Al’lami for condolence. It is highly likely that the palaces of Afzal Khan Al’lami were in Nawankot and he would have been buried here.”

Keeping in view these words, further research revealed that a noble named Afzal Khan Al’lami indeed existed during Shah Jahan era and he had a connection with Lahore. Mullah Mohammad Saleh Kamboh writes in Shah Jahan Nama, “During those days, Dewan-e-Kul Al’lami Afzal Khan passed away on 12th Sha’aban. Hazrat ordered Islam Khan that as soon as Saif Khan arrives he should appear in the Royal Court. It was further ordered that until Islam Khan’s arrival all the ledgers pertaining to the lands should be presented. On 16th Sha’aban the brother of Al’lami Afzal Khan, Amanat Khan and his two sons, Fazal Ullah and Inayat Ullah Khan were granted Khilla’at (royal robes).”

“Afzal Khan was 70 years old and he had been serving as the Emperor’s Dewan for the past eight years. He fell severely ill. Padshah went to enquire after his health on many occasions the Emperor stipulated that Afzal Khan had never badmouthed anyone.”

These excerpts prove that there used to be a high ranking minister named Afzal Khan Al’lami and that he was held in high regard by the Emperor so much so that not only the Emperor visited him during his illness but he also went to pay his last respects after his death. His relatives were also recipients of Royal favour. The fact that such an official of the court didn’t get a befitting tomb is somewhat odd. This matter should be looked into further as it is quite probable that the mausoleum that is considered Zaib-un-Nisa’s, in fact belongs to Afzal Khan Al’lami.

Presently as one moves from Multan Road, Nawankot towards Samanabad while passing by Chauburji one comes to ‘Moarr Samanabad Chowk’. Here one road goes towards Gulshan-e-Ravi and another leads towards Gul Zaib Colony, Samanabad. This place was previously called, Jan’nak Nagar. The next bus stop is, Super Stop, it was earlier called ‘Chahpparr Stop’. A few paces before this stop lays the tomb that is attributed to Zaib-un-Nisa Begum.

A commuter moving on Multan Road today remains unaware of this relic that is now but a shadow of its past glory. We can see glimpses of the architecture of Jahangir’s Tomb in this structure. Two of the original turrets built atop the corners of the tomb’s wall are still telling tales of grandeur lost in time. The remnants of golden paint work are still dazzling and make one long to behold these turrets in their original glory. A few leftovers of the waterways, remind one of the exquisite landscaping of the building in its full glory. A huge ancient tree overshadows the building. In the small ground there were trees of Neem, Peepal and Dharaik. Four steps from this courtyard lead to the podium of the tomb. A few years ago, the floor of the podium supported traces of black and white stonework and delicate Kashikari could have been spotted in this skeleton of a former beauty. In the exact centre of the tomb, under an imposing dome, there is grave which is covered with green cloth. There are some earthen oil lamps as well near the head of the grave. Sometimes, a few elderly folks, in addition to some students of history come here to offer Fateha.

The imposing structure of the turrets also gives one some clues regarding the width and breadth of the original walls. These turrets now serve as living quarters of the watchmen and the once grand boundary wall has now become part of surrounding houses. The walls also host stores of a nearby brick kiln. The owners of a house towards the right have created an access and use the small ground of the tomb to park their car and bikes. A small street in the eastern side was used by the local populace for commuting. A few years ago this street was closed off by using clay bricks. Once a grand building of its time now covers less than two Kanals. In summers, this building has been used as a space to repair motors of air coolers. What worse fate could befall this monument? A few years ago there was an iron fence in front of the building and a lock was also placed on the door of the fence. After partition this place wasn’t such a picture of neglect. There were times when the students of M.A.O College used to play badminton in the open grounds of the tomb. There wasn’t such a rush of traffic on the road.

A few years ago when work on Orange Train project started, some buildings got demolished to their foundations as happened in the case of ‘Bengali Building’ but some structures got a makeover as well. Renovation and restoration work also started on this tomb. Doors and lattices in line with the Mughal Architecture were fixed but the delicate Kashikari from the external and internal walls was obliterated. In place of the old floor a new floor of red stone has been laid. The grave was also retouched and brought into a better condition. The aforementioned trees have also been chopped down. These steps, however, aren’t sufficient. Modernity is marching over history because we have failed to inculcate the importance of maintaining cultural and historical heritage in our nation. Government and public alike remain largely unconcerned with preservation of historical buildings the way they should be preserved and looked after. Maybe that is why the courtyard of the mausoleum is still used as a parking space.

It seems fitting to end this article with a poignant poem of Zaibunnisa Makhfi,

“Long is thy exile, Makhfi,

Thy heart within burning,

But now what hove hast thou, unfortunate?

The years have passed and left it desolate,

The dust of ages blows across its gates

If on the Day of Reckoning

God says, ‘In due proportion I will pay

And recompense thee for thy suffering’

Lo, all the joys of heaven it would outweigh;

Were all the God’s blessings

Poured upon me, yet