Every region has an air of its own, a feel that sets the pace of society. Volatility is a practice deep-rooted in the Middle-Eastern part of the world. The uprisings of 2011 were not one of their kind but was a reaction of myriad factors that all added up to exacerbate the geo-political situation of the Arab world. Because of the similarity of upheaval-like circumstances, geo-political scientists have coined a new term -the Greater Middle East. It encompasses areas of Levant, Persian Gulf and North Africa.

The Middle East region has been in a state of turmoil ever since the discovery of oil (65 percent of the world) earlier in the 20th century. Whether it’s the fall of Ottoman Empire or the establishment of Israel, everything seemed to purposefully serve to the ultimate tumult. A land prone to instability, raising the question of governance, which has left it in a blind alley after the famous Arab Spring, seemingly, a natural outrage but practically a planned one. This will be proved further. 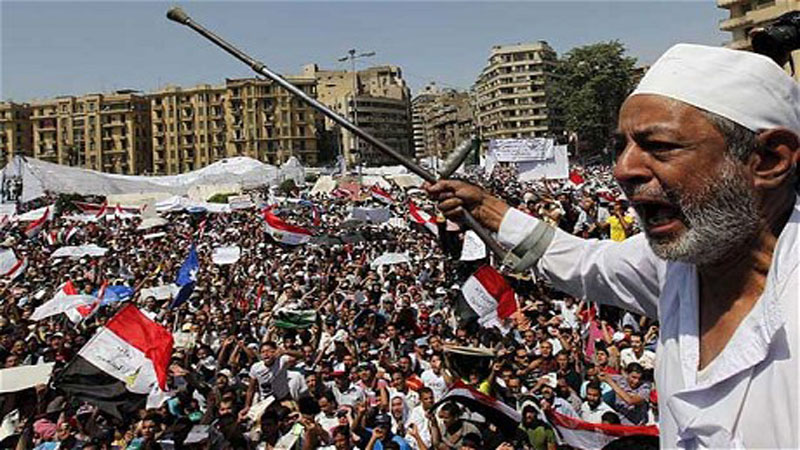 Inspired by the Jasmine revolution in Tunisia, started by the self-immolation act of a street-vendor and a breadwinner of his family, Mohammed Bouazizi, to protest the subjective seizing of his vegetable stand by the police over failure to obtain a permit. That rage hit a massive number of people, and resulted in the abdication of the autocratic president, Zain el Abideen, who then had to flee to Saudi Arabia. It instigated a large population, all around the Greater Middle East, to rise against the authoritarian regimes in their own territories. Governments were overthrown in the same style in Egypt and Yemen, bringing the long reigns of Hosni Mubarak and Ali Abdullah Saleh to an end, marking the start of a new crisis.

The demise of Muammar Gaddafi brought nothing but a civil war. The anti-government protests, major or minor, did bring subtle reforms and changes in governmental spheres, but the worse appeared in Iraq, Syria and Libya, where non-ending civil wars commenced and are going on to date. The total death toll exceeding 61,000 individuals present a one big question, was it good enough to bring self-rule?

The western scholars would assume the region ‘not fit for democracy’, or that the struggle was all about ‘ancient hatreds’ and not against tyrannical rules, but for that history needs to be revisited. Was the disintegration of the Ottoman Empire able to bring peace and democracy? Or it actually produced a new era of dictators and monarchs? Was George W Bush’s claim to be remembered by the invasion of Iraq as the one bringing freedom and hope to the Middle East be justified? The answer is ‘clear ambivalence’.

The ongoing havoc in Sudan-an important African majority Arabic speaking country with one-tenth of oil exportis not a new episode; in fact, it is a replica of incessant past events of the region. Insurgencies and toppling down of long reigning rulers is a trend that had been set right from the start of the running decade A crowd of protestors chanting ‘Victory or Egypt’ explains the link. Not that they want to join Egypt but in actual seek motivation from the protestors of the Tahrir Square. With Omar-al Bashir gone, all that they rebelled against is re-asserted, leaving them in illusion and brutality.

Unlike the past, economies of the region have plummeted swiftly as a whole. Totalitarian governments, with deep state actors involved in the situation, security is uncertain, giving rise to extremist organisations like ISIS and al-Qaeda. Rebels stimulating internal clashes, state conducted carnages and migration in abundance is the grim face of the Greater Middle East now.

A region with a budding population of youth and rich in ‘black gold’ is nothing short of a heaven for world powers. More the region is instable more is this benefiting for their business interests. Apparently, the movement was entirely indigenous with no foreign actors involved but that is doubtful. American army remaining in Iraq for eight years not just ruined it completely but also exposed the whole region to vulnerability.

As for Sudan, the inside reports say that European powers back the forces, and pay them to carry on killing so that the migration process could be thwarted. Principles of neo-imperialism have been practised here with the then Obama administration ‘leading from the back’. NATO air strikes during the mutiny in Libya, withdrawal of foreign investment from banks leading to a major deficit and drop in the GDP, proxy wars in Syria turning the historic city of Aleppo into a wreckage.

The interests of the western powers are at stake in this territory of potential, and so to have their gains they instigate multiple different theories. There are internal disputes like the ongoing on the borders of Saudi Arabia and Yemen, the clash of Hamas and al-Fatah in Palestine, the actual and intellectual discords of pro-government and pro-democracy forces like that of the Supreme Council of Armed Forces and Muslim Brotherhood in Egypt. The other of that type is the Sunni-Shia conflict, which is traced back to the contrast of Arab and Ajam now separating and actually isolating Iran and Iraq from the rest of the region.

One thing to be noted here is that there were states that were not bothered or recovered quickly from this shocking eruption, and they were none other than Israel and Saudi Arabia-hand in hand partners. They opted the policy of doves with America. For all intents and purposes, America has always shown commitment to the strengthening and prosperity of Israel, and has been the biggest and a stalwart partner ever since its creation because of the input of Jews in a larger portion of the American economy. Barack Obama played smart but Donald Trump and Mohammad bin Salman have done away with any diplomatic obstacle in this regard. The agenda is crystal clear as presented by the Zionist political scientist, Theodor Herzi, in his book, The New Society, and by the former Israeli foreign minister, Shimon Peres, in The New Middle East. Both of these ideas have been the obsession for a Jewish government policy, which has altogether reshaped the greater Middle East.

Change has proved to be a delusion. It is a reminder of George Orwell’s The Animal Farm, which implied the desire of change as simply the change of faces while the masses are easily manipulated. It would be right to say that the region certainly has to go a long way before adjusting to the imported, western idea of democracy. But there should also be no approval of the despotic tendencies of the governments of the region because power corrupts and absolute power corrupts absolutely.