The Life of Ahmed is a milestone English novel 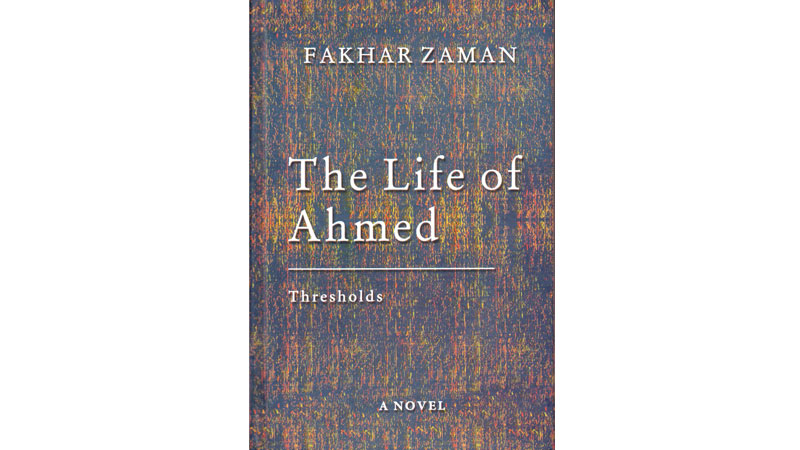 Fakhar Zaman’s new novel is different from the usual novels being written in India and Pakistan. Fakhar Zaman is a celebrated Pakistani writer who has over 40 books to his credit. He writes in Punjabi, Urdu and English. The present book is a novel written in a grippingly lucid style. It is about the travails and jubilations of Ahmed – his youth, middle-age and after middle age. The novel is divided into 34 chapters or thresholds, as Fakhar Zaman chooses to call them. Some instances in the novel are hilarious. For example when Ahmed is in Amsterdam as a young boy, he is asked to sing a song in his native language. He sings the following song in Punjabi and also translates it for the audience;

Don’t go to that street

The Jatts of that street are very cruel

They will hang you!

At another instance Ahmed mischievously writes “Love you” on a kite and flies it, then drops it on a roof which was a little distance away. A beautiful girl of his baradri picks it, writes back “love you” on it and gives it a lift. The kite soars in the sky but the girl’s mother gets wind of the happenings and comes to Ahmed’s home to complain to his mother.

The part of the novel which deals with Ahmad’s interaction with his friends is also very interesting. His friend Sardar was a “good host, a voracious reader and a regular visitor to system bolaget…” apart from being a wonderful cook. He went to sleep in the bathtub after getting high on New Year’s Eve. Ahmed’s other friends were Professor, Khan, Magar Makhi and Terror each of them with their own idiosyncrasies. Fakhar Zaman describes Ahmed’s life in Gujrat, Amsterdam and Stockholm in great detail. These thresholds are very interesting for the reader. Ahmed’s friends drink, dance, listen to music and enjoy the moments of life. These thresholds apparently give an impression of humour but deep down, there is meaning and purpose. The friend’s company gives Ahmed a refreshing flashback into how beautiful and enjoyable things were.

Fakhar Zaman’s novel is basically reflective of corruption, degeneration and decadence of society: On one hand, it holds politicians responsible for miserable condition of the country, on the other hand, it puts blame on flattery and incompetence on part of the bureaucracy.

Zaman depicts in a moving scene, the lashes that are administered to Ahmed in jail, for his rebellious poetry. With each lash, Ahmed recalls excerpts of writ petition against proscription of his books. It is so expertly juxtapositioned that it brings tears to the eyes. Similarly, the flogging of the painter and singer has a heart rending description. The terminology used in prison by inmates is so lucidly described that one comes to know thoroughly, the alphabets of jail life. Zaman is at his best as a writer to make description of different situations. The novel includes some inspiring poetry by poets like Pablo Neruda, Taufiq Ziad, Nazim Hikmat and others. Zaman has quoted a beautiful poem of renowned Swidish poet Peter Curman which is addressed to all the writers:

What can a lonely poet do against war

My answer is a lot!

poems are not bullets that kill

Poems are bullets of life

When a poet shoots at you

He widens your mind….

Poets all over the world – shoot!

Let your bullets of peace kill the war!

your words shall disarm the armies!…

He has also quoted the famous poem of well known poetess, Hanan Awwad, advisor to Yasir Arafat, which is titled Commando. It is a forceful, revolutionary poem:

I painted my identity with an olive twig

From the mouth of the machine gun I wore my garments

From the sacred soil, my forehead radiates

And from the suns with their glittering light

Now then, near Palestine

I redeem your soil with my heart and blood

Oh, Jerusalem, land of fire, this is my homeland

My standard and my banner are raised on its soil

With Arab blood I have come to sing the praises

Overflowing with the blood of experience, sacrifice…

Zaman has also included in his novel, the long poem by Benazir Bhutto titled Marvi. It is a poem that deals with atrocities of General Ziaul Haq’s regime and the sufferings inflicted on Benazir. I quote here a few lines from the poem;

When the world was still to be born

When Adam was still to receive his form

Then my relationship began.

When I heard the Lord’s voice….

The first woman leader of a Muslim State

the equality of men and women

The pristine message of Islam

Hidden under prejudice and discrimination….

One threshold deals with the illness because of cancer of Ahmed’s wife. The entire description is poignant. It brings out acute pain of a cancer patient and also that which is inflicted on the patient’s relations. That scene particularly, is very moving when Ahmed proudly presents his wife the Gurmukhi translation of her book but she has descended into unconsciousness. Ahmed wrote a moving poem on the death of his wife:

I had tried my level best

To keep her hidden in my

She kept trickling through

My loose sieve of fingers

With tears trickling down

I ask my empty hand

Tell me and speak

In the last threshold, Ahmed has grown old and feels that he is precariously perched on the last threshold of his life; however there is a saviour in the form of his Indian wife who is firmly holding his hand. Ahmed feels that his wife is a “beacon of light, a light at the end of the tunnel”. The novel ends on this note of optimism.

This novel by Fakhar Zaman is different from usual English writings in Pakistan. It is not pseudo-romantic with no elitist chattering and no concocted stories. It is firmly rooted in the ground, sensing its aroma, sensing its fragrance, but at the same time feeling its pain and tragedies. The novel is intense and has a straight language which goes to the heart. All said, it is a must read.