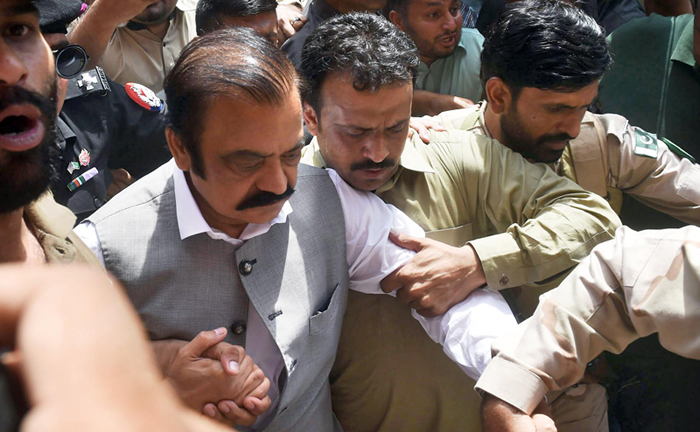 A day after his arrest, Pakistan Muslim League-Nawaz (PML-N) Punjab President Rana Sanaullah was sent to jail on Tuesday on 14-day judicial remand.

The PML-N leader’s lawyer said that ANF had arrested Sanaullah after making a political case.

Ahead of Sanaullah’s appearance before the court, strict security arrangements were made. A large contingent of police was positioned inside and outside the court. All routes to the court were closed with containers and barbed wires.

On Monday, Sanaullah was arrested in what is said to be a narcotics case involving proscribed outfits.

The PML-N termed the government’s move to be “worst example of political victimisation” and warned that such tactics to push the opposition against the wall would backfire.

An ANF team arrested Sanaullah, a vociferous critic of Prime Minister Imran Khan, on his way to Lahore from Faisalabad on the motorway at around 3pm. Although the ANF chose not to give details of his arrest, Minister for States and Frontier Regions Shehryar Khan Afridi had confirmed his arrest, saying, “The ANF has arrested Rana Sanaullah. He is my colleague but no one is above the law.”

His brother-in-law Rana Sheryar had said some 15 vehicles of the ANF and Elite Force Punjab took part in the raid to arrest Sanaullah. “The raiding team intercepted Sanaullah’s car at Sukheki. It took him into custody along with his driver and three guards and probably took him to the ANF Lahore Cantt office,” he said.

Awan was quoted as saying that no one was above the constitution and law in “Naya Pakistan”, adding that the ANF was an “independent institution” and the government had nothing to do with the lawmaker’s detention. The PTI leader added that the PML-N wanted to use Sanaullah’s arrest for “political point scoring”.