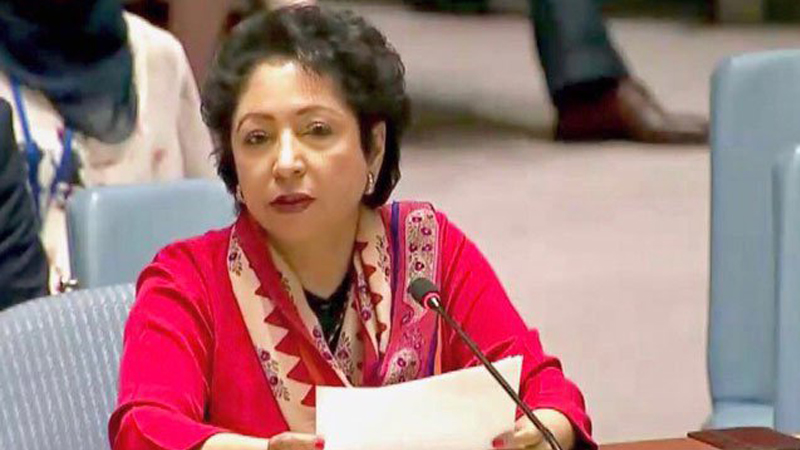 Pakistan’s envoy to the United Nations, Dr Maleeha Lodhi, on Wednesday said Pakistan was firmly committed to ‘Two State Solution’ of the Palestine dispute and rejected the shifting US position.

Permanent Representative to the UN in New York Dr Lodhi was speaking via video at a round table conference organised by Islamabad Policy Institute (IPI) on ‘Palestine: Deal of the Century & Two State Solution’.

The conference was also addressed by the deputy permanent observer of State of Palestine at the UN, Feda Abdelhady, and representatives of political parties, think tanks and academia. It had been organised by IPI in connection with the international workshop held in Bahrain, where US rolled out the first part of its proposed ‘Deal of the Century’.

The representatives of the political parties on this occasion observed that Pakistan government could not change its position on Palestine dispute because of its implications for Kashmir conflict. They urged the government to clarify its position on the US proposal that was being backed by several Arab countries.

“We are seeing shifting of US policy …. Pakistan does not agree with shifts in position and we continue to be part of OIC in rejecting these shifts and calling for a just, and humane settlement of Palestine issue in line with UNGA and UNSC resolutions,” Dr Lodhi said while referring to US position on Golan Heights, and illegal settlements.

“We call for ‘Two State Solution’ based on pre-1967 borders with Jerusalem as capital of independent and contiguous Palestinian State,” she said and emphasized that international consensus in favour of such a solution remains unaffected. Quoting the UN secretary general, the Pakistani envoy said, there was no other viable plan that could deliver peace in Middle East.

Abdelhady, in her comments via video from New York, rejected the ‘Deal of the Century’ as “cynical and bad faith effort”.

Criticising the US plan, she said Bahrain Conference relegated core issues in Palestine dispute as ‘non-issues’ and there was not even a mention of ‘Palestine’ and ‘occupation’ in the US plan. She said US was, in collaboration with Israel, trampling on the law and mocking the longstanding international consensus on the issue.

“It is clear that appealing, cajoling, and appeasing Israel is not going to work and the international community must realize that only accountability can break this toxic cycle, end illegal occupation and achieve rights for Palestinian people,” she maintained.

NA Foreign Affairs Committee Chairman Ehsan Tiwana, who chaired the session, said Pakistan’s position on Palestine was unambiguous and the government did not have much space for deviating from it because of similarities between Kashmir and Palestine disputes.

Tiwana said any shift in the position, if it were to happen, would have to be debated in the Parliament and the decision would have to be taken through consensus. “There is no other way for changing the stance,” he said.

Pakistan Muslim League-Nawaz leader Awais Leghari said that despite the discernible shift in Arab countries, Pakistan must retain its independent stance and be cognizant of the impact of recognition of an occupier state’s legitimacy and disregard of international agreements for the suppressed people of Palestine. “This would also inadvertently impact Pakistan’s position on Kashmir.”

Majlis Wahdat-el Muslimeen Secretary General Raja Nasir Abbas Jaffery said that Trump’s ‘Deal of the Century’ was part of its plan for greater Israel and is doomed to fail. He said US was attempting to territorially expand Israel in disregard of international law and principles. He warned that US plan was a threat for the entire region.

Jaffery said that Pakistan government looks confused on the issue. He urged Prime Minister Imran Khan to play a pro-active role in dealing with the emerging situation. He suggested that Pakistan while formulating its response should keep in view larger picture and act wisely.

IPI Executive Director Prof Sajjad Bokhari said that President Trump’s proposed solution could put Palestinians at a permanent disadvantage by taking them further away from the realization of the ‘Two State Solution’. The plan, he maintained, was aimed at strengthening Israel’s permanent control over East Jerusalem and strategic areas of the West Bank, while restricting Palestinians to a few isolated enclaves.