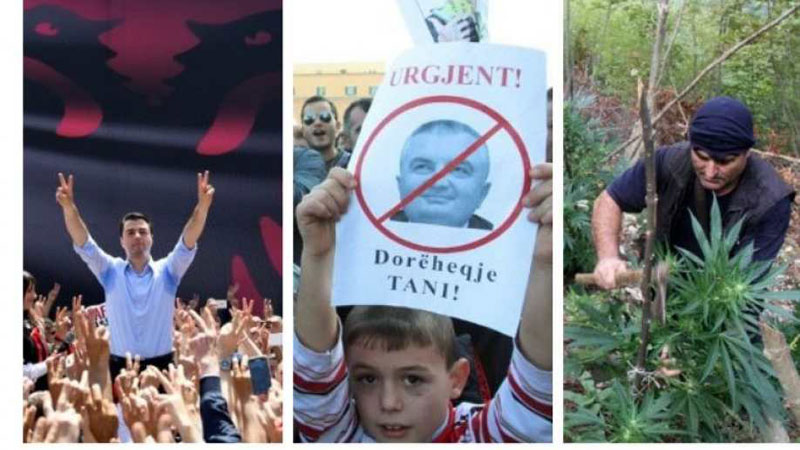 With an ex-minister on trial for drug trafficking, an opposition leader suspected of money laundering and hundreds of judges probed over graft, Albania is wrestling against a corruption plague threatening its EU membership hopes.
The government insists that no other EU hopeful has undertaken such sweeping efforts to tackle graft and organised crime in order to join the bloc and the European Union has noted significant progress.

But the decision is down to the EU’s member states and there are fears they may hesitate as political infighting clouds the anti-corruption campaign.
The NATO member nation on the fringes of Europe has been under strong pressure from Brussels, particularly over organised crime.

The EU’s foreign policy chief Federica Mogherini applauded Albania’s “impressive results” in fighting drug crime when she recommended opening accession talks for the Balkan state in May.
But the European Commission also noted that while Albania’s once flourishing cannabis farms appear nearly rooted out, “corruption is prevalent in many areas”.
“Efforts need to continue, in particular by tackling money laundering and confiscating assets stemming from crimes and other unjustified wealth,” it added.

The Balkan state’s efforts will be under the spotlight again on Wednesday, when a high profile trial opens for Saimir Tahiri, a former Interior Minister and political ally of Prime Minister Edi Rama.
In late 2017, he became a suspect in a cannabis smuggling case after his name appeared in wiretaps of a drug trafficker and distant cousin in Italy.

‘A mountain of mud’

The issue has become a political flashpoint.
Rama has defended his former minister, saying in November that “a mountain of mud was thrown at him based solely on the slander of a few criminals”. Tahiri’s lawyer has also accused prosecutors of lacking evidence and only pursuing the case for “political” reasons.

But the opposition has portrayed Tahiri as evidence of an administration it alleges is enmeshed in criminal links.
Rama, who has been in power since 2013, has strongly denied the opposition’s accusations that he and his Socialist party have used “crime money” to buy elections.

For months opposition supporters have been holding weekly protests against Rama, hurling firecrackers at government buildings and clashing with Tirana police.
But on Monday the opposition leader Lulzim Basha was himself summoned by courts on suspicion of money laundering and illegal spending during a 2017 political campaign.
Now he is accusing the authorities of a “political trial” and “intimidation”.

The stream of allegations is trapping Albania “in a vicious cycle by creating the impression that every party has its own criminals”, said analyst Afrim Krasniqi, who leads the Institute of Political Studies in Tirana.
Yet some reforms are producing real results, he added.

In 2015 Albania adopted a law requiring government officials to declare any crime records.
In the following three years, a mayor and six deputies were forced to resign for concealing criminal pasts.

A dozen other MPs are also under investigation, while some 30 local elected officials and some 265 civil servants have been forced to step down for corruption suspicions or other reasons.
Krasniqi said Albania needs to go further, calling for legislation to impel financial transparency from political parties, to ensure they do not receive “hidden or criminal funds”.

Albania’s justice system is further complicating matters as it buckles under a separate graft review.
A judicial reform process backed by the EU and the US has been examining the assets, income, corruption and organised crime links of judges for several years.
Out of 800 judges, more than 140 have been reviewed and around 90 have either been dismissed or resigned to avoid the probe.

That has left important bodies, like the Constitutional Court, effectively defunct with only one out of nine judges remaining.
Meanwhile Albania’s chief prosecutor, former Attorney General Adriatik Lalla, is under investigation for money laundering.

Speaking in May, the EU’s Mogherini said that “what has been achieved with the justice reform (in Albania) remains unprecedented not only in the region.”
But it is European member states who will have the final say.