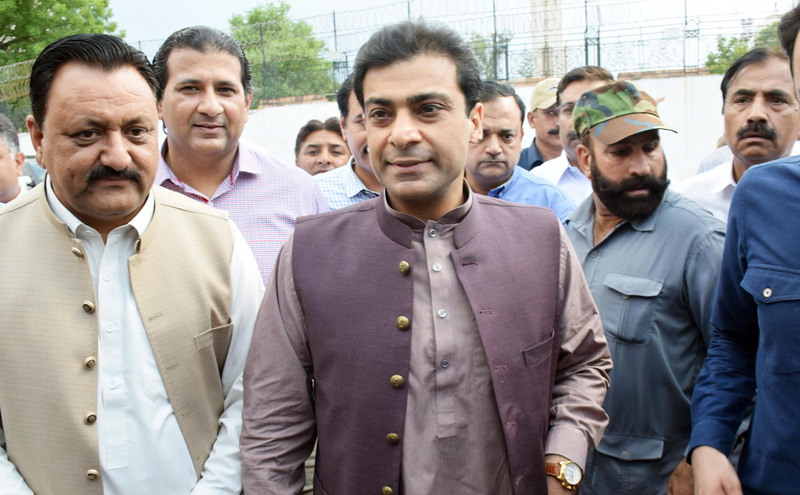 Leader of the Opposition in Punjab Assembly Hamza Shahbaz severely criticised the economic policies of the government while opening the general discussion on the provincial budget in the Punjab Assembly on Monday.

As he started delivering his speech on the budget being the opposition leader of Punjab, slogans were raised against him from the treasury benches that also provoked the lawmakers of the Pakistan Muslim League-Nawaz (PML-N) who also started chanting slogans against Prime Minister Imran Khan and his government. Speaker Chaudhry Pervaiz Elahi had to intervene, telling the treasury members to listen to Hamza’s speech attentively as he was the opposition leader.

As Hamza proceeded with his speech, he started bashing the economic policies of the government and said that this budget was prepared by the same International Monetary Fund (IMF) who had “snatched our economic freedom and we have to pay a heavy price of accepting the demands of the IMF”. “Investment has decreased drastically since this government took the reins and a farmer, a layman and even a vendor is cursing this government for the worst-ever economic crisis that we are facing today due to the wrong policies,” said Hamza.

He said the PML-N government produced 1,100MW electricity and constructed 1,700KM-long motorway after getting loans, but the incumbent government did not do anything after receiving loans of billions of rupees because “it doesn’t know anything about the political economy”. Talking about the figures of the budget, Hamza said that the government was projecting the GDP growth at 2.4 percent despite the fact that the previous government had achieved the GDP growth of 5.8 percent. The inflation would go to an alarming figure of 13 percent and it was at 5 percent during the PML-N tenure, he said. “The dollar has reached at Rs 156 (sic), stock market decreased by 200 percent, petrol prices increased by 30 percent, electricity bills increased by 20 percent, gas prices increased by 146 percent, foreign investment decreased by 52 percent, unemployment reached at 21.5 percent and the foreign loans have been increased by Rs 500 billion,” said Hamza, adding that he was worried about the ongoing political and economic situation of the country.

According to the opposition leader, 1.2 million youngsters were in search of jobs, including 800,000 women, while the government was snatching the employment opportunities in the guise of anti-encroachment operation. He was of the view that the finance minister delivered the shortest ever speech in the history of Punjab because he didn’t have anything to say and it was sheer injustice to the province that had a population of over 120 million people. He further added that the development budget had been decreased from Rs 635 billion to Rs 350 billion, which shows that the people of Punjab would not get much development schemes as compared to the previous tenure. “They used to criticise us for giving development funds to MPAs but now they have given Rs 50 billion to MPAs in the name of special initiatives,” said Hamza. “More than 1 million people have lost their jobs in the last one year and this figure will further increase in the next year.” Talking about the health budget, the opposition leader said that the PTI government just allocated Rs 47.5 billion for health and “we increased the health budget by 525 percent and also established eight new hospitals. More than 84 percent of medicines were provided free of cost by the PML-N government, while we also revamped 15 DHQs and 25 THQs across the province.”

Responding the speech of the opposition leader, Minister for Law and Parliamentary Affairs Raja Basharat said that the economic problems wouldn’t have emerged had the PML-N dared to speak the truth to the people. “The prevailing economic situation was inevitable because the finance minister of the PML-N left the country and was declared absconder by the court. The bank cheques of Rs 56 billion issued by the last government bounced, and therefore a case of fraud should also be registered against him,” he said. He also said that the MPAs of the PML-N still had to pay Rs 500 million of the Punjab government for using the accommodation of Punjab House Islamabad and an inquiry commission would be constituted soon to probe all such scams of the last government.