The beauty of the Sema dance

* The dance focuses on the inner spirit; a way to connect with God or feel His presence all around 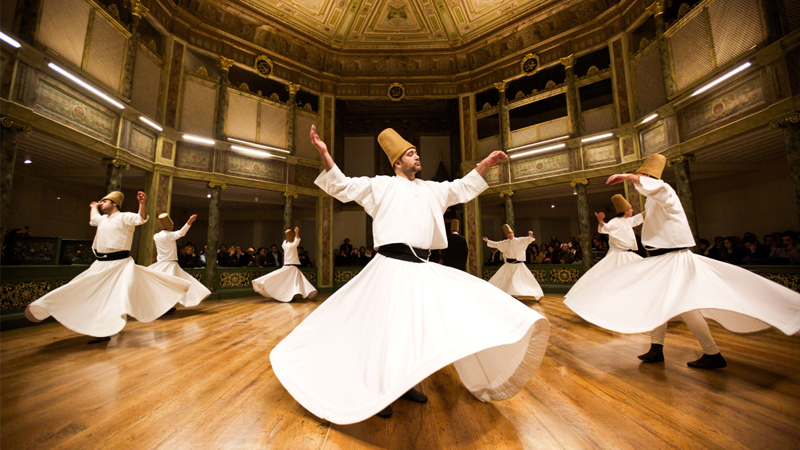 Sema is a popular and fascinating ritual dance which is performed by whirling dervishes. The dance originated in the 13th Century. The originator of Sema was poet and jurist Jalaluddin Muhammad Rumi.

He is one of the most appreciated Sufis. He added dance as a part of Sufi doctrine.

He found Sema as a nurture for the soul.

Sema literally means universe. The dance focuses on the inner spirit; a way to connect with God or feel the presence of Him all around.

The dance begins with the recitation of noble eulogy which praises Prophet Muhammad (Peace Be Upon Him).

When the ney solo ends, the whirling dervish entrain towards the head dervish and start Sema.

The main move of Sema is continuous turn of dervishes.

The Semazen whirl around in a circle until they reach the feeling of meditation.

They increase the speed when they become transcended with the desire to reach the love of God to travel through their bodies.

They believe they connect with God or feel him through it.

Once they are connected, there is no me and you, but only the soul.

They remove their black attires one by one as a way to get rid from the ego.

While they have abandoned the ego, they attain spiritual perfection.

Sema is a source for the dervishes to connect with the universe.

Semazians reach a level of ecstasy which is called “vejd” that in Arabic means “finding”.

The dervishes turn counter clockwise around themselves and around the dervishes in circle which represents the solar system, the planets and stars revolving around the sun.

Through the dance, dervishes understand the eternity of soul conception.

The dance is a strategy to create a relation between human and divine.

For Sufis, knowledge is metaphysical.

They believe it can’t be attained through thinking but by practicing so, dancing is an important practice for their knowledge.

Turning is considered as travelling the universe before they reach God.

Initially, they turn with crossed arms.

Following that, they open their arms; one hand up and the other down.

Their right hand is towards sky which signifies God’s beneficence and their left hand indicates ground or earth, representing God’s spiritual gift to those who are witnessing Sema.

It is believed while twirling around their own heart, they can embrace whole humanity with love.

Moreover, they use music as an aid for their meditation.

It is performed with traditional mevlevi music.

The semazens first whirl to turn their doubts into beliefs and then beliefs into faith.

Sema has four portions. First, to accept themselves as created beings.

After that, transforming ecstasy into love and the fourth to serve the humanity when you return.

Rumi’s whirling dance in performance is organised in different parts of Turkey.

Every year, Sema is performed in Konya, which is known to be the place of whirling dervishes and where Rumi is buried.

It is also observed in Istanbul.

The ritual is admired by foreign visitors.

The sema ceremony was proclaimed a masterpiece of the oral and intangible heritage of humanity by the United Nations Educational Scientific & Cultural Organisation.