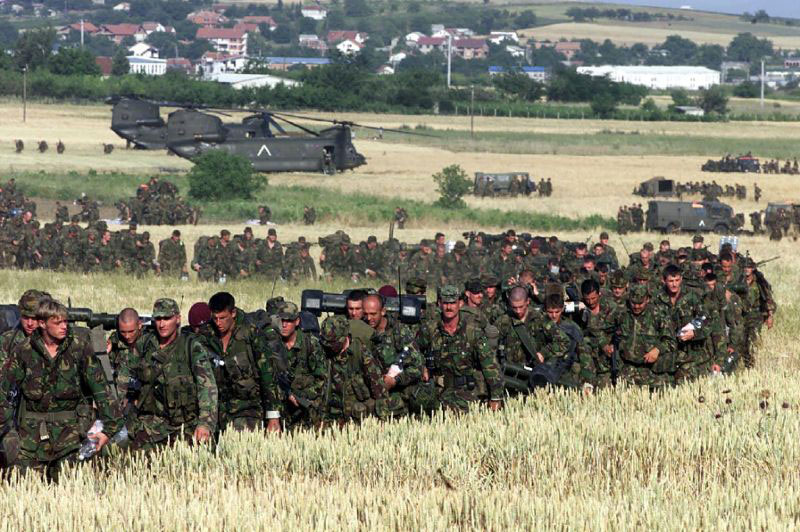 Twenty years ago tears were flowing in Kosovo — of joy or of despair depending which side you were on — as NATO troops rolled in, ending the war with Serbia.
For Kosovo Albanians, June 12, 1999 was a day of liberation from Belgra

But for the Serb minority, it was a loss that ushered in a new chapter of fear and uncertainty.

This Wednesday marks the 20th anniversary of that turning point. Kosovo’s government will celebrate with fanfare, in a ceremony featuring a speech from former US president Bill Clinton, a core ally during his time in office.

NATO’s three-month intervention ultimately halted the violence between Albanian separatists and Serb forces under the direction of strongman Slobodan Milosevic.
But while the violence was ended, the two sides have never fully reconciled. Relations between Kosovo’s Albanian and Serb communities remain fraught.
Memories of June 12 trace that split.

Shpresa Gashi, a 68-year-old Kosovo Albanian singer, recalls the “explosion of emotions” after news arrived that the international troops had entered Kosovo.
Over the course of a year and a half, the conflict had claimed 13,000 lives — the vast majority Kosovo Albanians.

At the time, Gashi was one of the hundreds of thousands of people who had fled to neighbouring states as war broke out.
“It was the first time I saw joy among refugees from Kosovo,” she recalled.

Esat Rexhepi, a 72-year-old living in Pristina, also cherishes the memory of that “wonderful day”.

“I put on my best suit, put on a tie and went out to welcome NATO troops,” he remembered, smiling.

For Edita Brajshori, a 40-year-old Pristina hairdresser, what lingers is the sound of music pouring out of apartment windows that had been shuttered for months.

“It was possible to hear loud music in Albanian for the first time after so many years,” she told AFP.

But fear and bitterness still dominate the memories of Kosovo’s Serbs, a community caught up in the crossfire.

Serbs have lived for centuries in Kosovo, a southern region considered a cradle of their Orthodox Christian faith.
After the war, many were pressured to either flee or sequester themselves in enclaves.

There was also a series of revenge attacks on their community, seen as score-settling after years of oppression suffered by ethnic Albanians under Milosevic.

According to Belgrade, 200,000 Serbs ultimately left Kosovo to take refuge in Serbia. Around 120,000 remain, mainly in the north near the border.

“I was crying…. I watched our army withdraw and foreigners arrive,” said Dobrosav Jakovljevic, a 73-year-old Serb who now lives in Kosovo’s north, a poor region.
He blames Serbia’s ruthless leader Milosevic for the war, but still feels his people got badly done by.

“Albanians are getting what they want, we lost everything,” he lamented.

“People were killed in broad daylight without them (NATO) moving a finger,” he said.

Djordje Jovanovic, a 46-year-old teacher in the Serb half of the city of Mitrovica, also remembers the sadness that crept in as he watched Serbian army and police retreat while NATO troops took their positions.

“This will never be Serbia again,” he thought at the time.

Serbia effectively lost control of its former province two days before June 12, when Kosovo was put under international protection by the UN.

But Belgrade has never accepted the independence Pristina went on to declare in 2008.

That has left Kosovo in geopolitical limbo, supported by the US and much of the West but its independence rejected by Belgrade and its allies Moscow and Beijing.

Tensions continue to run high among the former war foes, and around 4,000 NATO-led peacekeeping troops remain in Kosovo today.

Now, Jovanovic feels the presence of the international soldiers is essential.

“Let them stay. If they did not exist, there would be a new war here.”