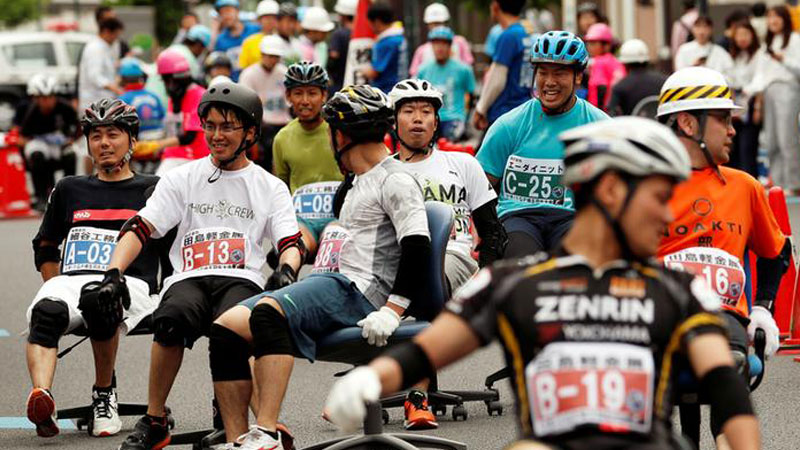 The rattle of tiny plastic wheels echoed through the normally sleepy streets of Hanyu on Sunday morning as the small city 60 kilometres north of Tokyo played host to the Japan office chair ‘Isu’ grand prix.

Founded 10 years ago and inspired by Formula One and Le Mans endurance racing, the race sees teams of three battle it out on ordinary office furniture across two gruelling hours to see who can complete the most laps of the 200 metre course.

Propelling the chair backwards was the universal tactic employed by the racers, who were at least spared the added constriction of business dress with competitors choosing their own outfits.

The three team members rotated during the race Le Mans-style to try and stay fresh but in the dense summer humidity, it proved a tough battle for even the most experienced racers.

The series, which started with a race in Kyoto in 2009, was the brainchild of Tsuyoshi Tahara and will feature at 10 different grand prix events across Japan this year.

“The origin of this race came to my head when I saw a tricycle endurance race,” Tahara explained to Reuters.
“Eventually I created the race which we can hold on a street, three persons per team for two hours of endurance.
“I wanted to create something no one has made before.”

Tahara’s idea has proved surprisingly popular, with 55 teams entering the Hanyu Grand Prix alone and hailing from as far away as Wakayama, 600 kilometres to the south.

The winning team, Kitsugawa Unyu, come from Kyoto and so had also travelled several hours with their chairs for the race.
Their reward was retaining the title they won last year and a prize of 90 kilograms of local rice, which the “drivers” struggled to pick up such was their fatigue.

The endurance test had taken its toll on the participants but spirits remained high as tired bodies staggered away from the event.
“I was tricked (into doing it),” joked 45-year-old Satoru Taguchi, who formed a team with other fathers from his children’s school.
“My body is badly sore.”

Mayu Negishi, who had just enough energy left to dance at the closing ceremony, said the support of the crowd had helped greatly.

“So many people cheered for us every time we passed and came around the corners,” said 18-year-old
“We were very touched. They are our fans and supporters.”

The next Isu Grand Prix takes place in Iwate next month.