‘Sertag’ reminds us to feel the unbearable pain of the poor

* The film revolves around the life of an elderly person namely Lahdaad who has two sons, Jameel and Nabeel 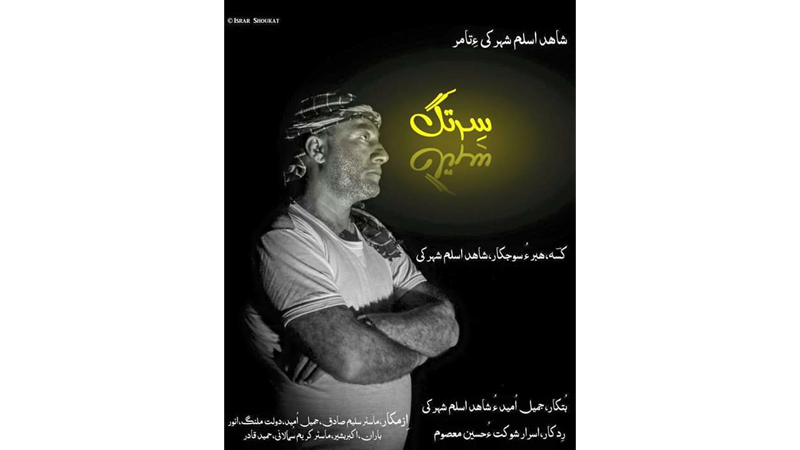 ‘Sertag’ is an impressive Balochi film which is based mainly on the increasing poverty in Balochistan and how painful the poor’s current condition is as they face mountain-like challenges which are unbearable for survival in a neglected society.

The film is directed by Shahid Aslam Sharaki who has wonderfully elaborated his emotions, feelings and felt the pains of those poor who cannot get three times food to eat and feed the family. The director’s extraordinary and praiseworthy efforts are appreciated with describing the actual purpose of 1st May known as International Labour’s Day and highlighted the actuality that how much the poor suffer from hardships, difficulties under poverty line in Pakistan. He has directed several films which are famous with containing logical themes, and ideas for the watchers to learn. His directed films are, Nashaan, Mardum, Drog a Ahsaar, etc which are well-known films with excellent messages for the audiences.

The film’s main characters are Jameel Umeed, Dr Hameed Khalid, Dolat Malang, Keem, Salim Sadiq, Hassan Raj, Anwar Bharan, Hajji Shakeel, Arif Qazi, Akbar Bashir and Nawaz Jhado among others who have done justice to their roles, in terms of dialogue delivery and screen presence. The film revolves around the life of an elderly person namely Lahdaad who has two sons, Jameel and Nabeel. Their living condition is extremely poor and their old father has to work day and night to make ends meet and feed his family.

The film begins in a hotel where a journalist approaches Jameel and asks him what it feels like to live in a poverty-stricken village. The actual purpose of these findings is a documentary the journalist needs to make for Labour Day, which would highlight the issues and difficulties faced by the labour community

The film begins in a hotel where a journalist approaches Jameel and asks him what it feels like to live in a poverty-stricken village. The actual purpose of these findings is a documentary the journalist needs to make for Labour Day, which would highlight the issues and difficulties faced by the labour community. The documentary aims to spread awareness about the culture of inequality, injustice and cruelty that poor families have to face. Jameel tells the journalist how he himself was born in a poor family and elaborates upon his feelings, pain and emotions on being hungry all the time.

Jameel begins expressing his own father’s journey that how much his father suffered for feeding his two children. Every morning, his father wakes up and goes for labouring in order to feed his children. But the elder son Jameel aged 23, was always dependent on his father to feed him. Jameel thinks and acts as if he is the King of the society instead of supporting his poor father. He never feels the pains of his old-aged father and wanted to live without working. Once, he beats his younger brother so terribly when he refuses to give him the Rs 100 that his father had given him to buy fish. Jameel demanded to have a great lunch, but he didn’t due to poverty.

Though Nabeel was his younger brother but he completely felt the pains of his father and always suggested his elder brother to not have major expectations which are impossible to be achieved, he too told him to work in order to light up the heavy loads of the father; but he never ever felt his father’s compulsion and didn’t even support him.

Lahdaad works at a shop as a labour and carried very heavy loads regularly for feeding his family. Once Akabar (A labour too) talked to Lahdaad that their lives and deaths have equality meaning, and instead of living in such painful conditions, death is better for them. Lahdaad being an old man, suggested him that whenever their health support them, they would work in order to feed their children and not to leave them alone. Though the labours cannot sleep due to tensions, depression of poverty, tiredness and other issues but they need never to think of stopping feeding the children. We should thank God for everything, if we cannot get three times foods, but we can sleep respectively without warns of superiority.

When father reached at home, Nabeel shares the incidents that happened to him. His father tells him to respect his elder brother, on which he replies, “Dad, he never ever thinks about you rather he is always making you to work and carry heavy loads, how come I should give the money to him.” Father felt sorry, as Jameel never felt the pains of his father rather he always smoked cigarettes in streets with doing nothing.

Basham always blames and criticises the poor who live in the village. He never sits near to them as he said that poor smell the most. Humanity was completely lost within him.

The first time Jameel’s father plays a Balochi song on the radio, which has been sung by a veteran singer, Jameel starts criticising it. The father elaborates the worth of the old singers that how excellently they had sung songs. After the father’s words, he felt as if his father was crying inside and was uncomfortable. He felt as if his father was lost in dangerous pains and he felt the father’s aches and realized to assist him.

Apart from being a labour, Lahdaad had had a small garden that was the source to feed his children, but painfully Haji Shakeel warned him and wanted to capture the poor’s garden even without having legal proves for the possession of the land. Lahdaad says that even though Hajji is powerful and superior than him, he can never grant the land to him.

After from that the reported asked Jameel about the life of Akbar; he continued that Akbar always worked as a labour to feed his parents. He worked every day to gain a little money and make them survive. Mostly, the rich people’s works were done by him but they didn’t pay him back; because of being poor and made him a slave. He even didn’t marry due to poverty. When his parents had passed away, he became disappeared from the village, and people said that he has gone in a major city for working, till today he is unseen here, nobody know whether he is alive or died.

Once the Lahdaad with his child were eating food with only onions, they were as silent as a death grave. Due to unbearable and painful conditions of the children, the father’s eyes shed with tears. The tears had major and serious messages for Jameel to realise the heartbreaking conditions of his father’s heart. Here he realized and promised to work as a labour with taking some responsibilities to assist his father. He worked with a Mason namely Nawaz at Kassak with construction of rooms. Jameel successfully returned back at home from work and he wished and was glad that whenever his father’s gets his new impression with realisation from the bad deeds, he would feel happy and would appreciate him entirely. But painful the death of his father didn’t let him to know the actual and real impression of his son who had learnt at very late. His father’s death was a major sign of the poverty and unrealistic expectations of his son who never felt the pains of his father and felt free as freedom.

The film successfully spreads awareness about the labour community, by pointing out the unbearable pains of the poor people who are left alone without the support of the government and the society. The film preaches on how we should not only be concerned about our own hunger and needs, rather we should think about the less privileged ones, assist them in difficulties and feed them. The poor look up to us for support and we need to unite in order to eliminate poverty from the country.