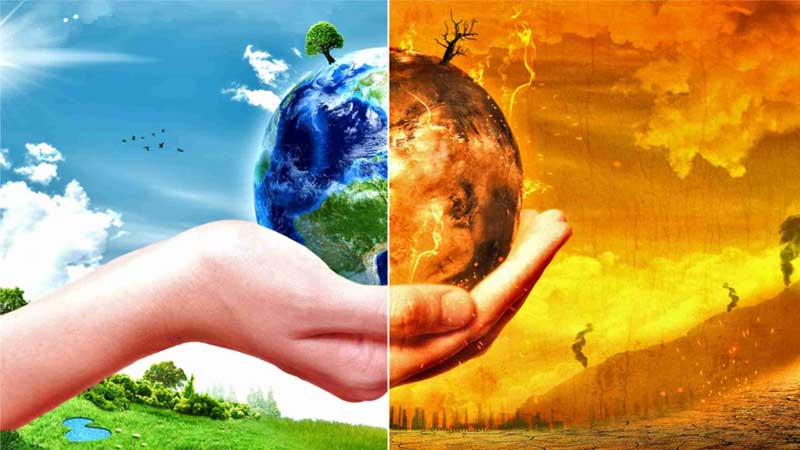 Climate change has played havoc with lives and livelihoods across the globe during last two decades. Poor and economically vulnerable people and nations seem to be paying more price of the phenomenon than the developed and resourceful societies. Preparedness and ability to respond to natural disasters could make the real difference.

In Pakistan, erratic weather and unprecedented late wet season have yet again proved to be devastating for millions of farmers across the country. The impacts of climatic change during last few years were witnessed through varied forms that include erratic rain patterns, draught and heat waves. Flashfloods and hailstorms in many instances caused huge loss to lives and livelihoods of the people. Millions of farmers from riverine and desert areas as well as the fisher folks in coastal areas seemed clueless on dealing with this new phenomenon. Unfortunately, very little has been done regarding adaptation and preparedness despite the ever-increasing looming threats arising out of rapid climate change.

Pakistan as a federal country and despite having Ministry of Climate Change at federal level has duly devolved the subjects such as environment and climate change to federating units (Provinces). This was expected to go down further to local governments which unfortunately did not get materialize for a number of known and unknown reasons. The capacity of provincial governments was still under a big question mark, especially with regard to coming up with effective adaptation plans to respond to changing realities i.e. dire need of bringing innovation in agriculture.

On other hand, climate change and environment preservation are the topics that have become a part of various developmental discussions around the world. The current decade witnessed significant environmental activism as evident from policies and actions to respond to climate change impacts and to ensure environmental protection from local to global levels. The experts and social scientists came up with diverse opinions, suggestions and recommendations on different aspects of climate change and challenges as well as natural resources protection. Besides, such discussions were equally important in line with sustained development and sought to resolve emerging tensions around rights to use and access to natural resources including forests, water and fisheries.

A recent global discussion on climate change, environment and energy that was held at Gumersbach, a smaller town of Germany, by International Academy of Leadership (IAF) outlined some pertinent points on dealing with aforementioned emerging global realities. The experts, academicians and political as well as social activists representing almost all parts of the globe made some objective deliberations during this international huddle. Regulations, governance structures and the role of local communities to protect and preserve the environment were outlined by the participants with specific geographical realities.

In the context of Pakistan, it is encouraging to observe that some media circles and professionals were recently seemed taking up the issues such as climate change and environmental degradation. FNF Pakistan and environmental journalists have recently joined hands to mainstream the discussion on these crucial issues. Hashoo Foundation (HF) has also initiated a national dialogue on climate change and environmental issues while involving diverse stakeholders. During a recent such effort by HF, experts highlighted that how air quality has been one of the major concerns for environmentalists globally. It was also explained that how air quality is directly linked with the health and wellbeing of common citizens. Therefore, appropriate policy measures are a key to manage air quality from national to local governance structures.

The social scientists therefore seem highlighting a pressing need to discuss, evaluate and suggest effective policies and measures to respond to new realities. The discourse is important to avoid conflicts and inequalities that may emanate from impacts of climate change and environmental degradation. However, while advancing such discussions from local to global level, one must not be oblivious of the fact that climate change and environmental degradation pose the challenges that may hugely vary in different context, situations and geographical realities. Hence, listening to voices from across the planet and taking all key stakeholders aboard would be a key to come up with broadly accepted and equitable solutions.

It’s worth mentioning here that one of the pertinent questions that revolve around climate change and environment being raised at expert and academic level recently were observed more inclined towards adaptation in local perspectives. Therefore, it would be more desirable for communities that their governments should be looking into matters such as link between environmental preservation and private property, polycentric to local decision-making infrastructures as well as seeing social norms and market mechanisms as possible solutions. A link may also be established between the governance structures and specific environmental and resources distribution with examples from across the globe.

Discourse around climate change has also seen some new thought paradigms as various evidences that were available suggest the phenomenon had occurred in the past centuries as well. Likewise, allowing individuals and communities to experiment, explore and come up with innovative solutions in the face of environmental challenges is an area urgently needed to be focused upon.

To respond to climate change impacts and environmental degradation, a detailed analysis of regions and countries specific case studies may answer the need of right policy frameworks. It may also help in dealing with quite diverse situations, especially at communities’ level. A similar pattern could be replicated for a detailed mapping of the environmental and climatic challenges in different parts of Pakistan. Engaging local communities in decision-making structures may prove to be a key for successful adaptation.

The writer is an Islamabad based political and social analyst having keen interest in environment, climate change and food security. He could be reached at shafqataziz1@gmail.com