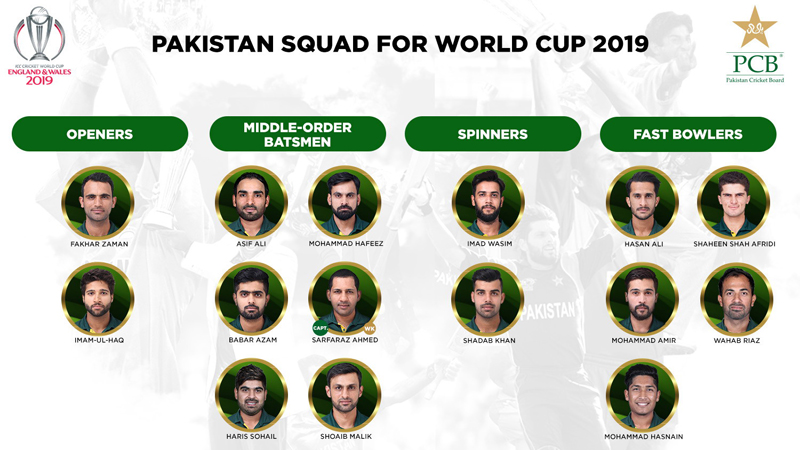 Pakistan are pinning their hopes for ICC Cricket World Cup 2019 glory on a crop of youngsters who have the talent to beat anybody but could also pay for their lack of experience. The side have only won the showpiece 50-over tournament once — under the captaincy of current Pakistan Prime Minister Imran Khan in 1992. Khan pledged to give youth a chance while campaigning for election last year and the squad, with an average age of just 27, reflects the demographics of the country, where around two-thirds of the population are under the age of 30. The prime minister, a swashbuckling all-rounder in his playing days, tipped 20-year-old leg-spinner Shadab Khan as a potential trump card when he met the squad last month.

Pakistan stole a march on their rivals by arriving early in England to play a five-match one-day series, although they suffered a chastening 4-0 defeat. Coach Mickey Arthur was not too despondent after his side lost the fifth and final ODI on Sunday, saying they had learned lessons despite their drubbing. “I know there are not too many teams who will arrive in England as prepared as we are in terms of the competition we’ve played against and match fitness,” said Arthur. “All I know is the players are very determined to do well. Every time they go out there they play for 210 million people. “We’ll be ready — come the first game against the West Indies, we’ll be ready.”

Pakistan boast enviable options in attack, with 19-year-olds Shaheen Shah Afridi and Mohammad Hasnain part of a pace battery led by Mohammad Amir and Junaid Khan. Shaheen offers a wicket-taking threat with his steep bounce while Hasnain has the ability to unsettle batsmen with sheer pace, sending down thunderbolts at 150 kilometres per hour (93 miles per hour).

Twenty-four-year-old Hasan Ali, touted for his ability to strike in the middle overs of matches, has already made a name for himself and has useful experience of English conditions. Hasan grabbed 13 wickets to help Pakistan win the Champions Trophy in England two years ago, finishing as player of the tournament. Aside from the pacemen, Shadab and Imad Wasim are an effective spin duo who can stem the flow of runs and also take wickets.

Pakistan’s batting is more vulnerable but is led by the dependable Babar Azam, 24, who is ranked seventh in the ODI batting rankings and scored a century against England at Trent Bridge last week. Imam-ul-Haq, 23, has had to cope with allegations of nepotism over his selection — he is the nephew of chief selector Inzamam-ul-Haq – but has come out fighting, smashing 151 against England in Bristol earlier this month. And fiery Fakhar Zaman, 29, can be a matchwinner with his never-say-die approach. The experienced trio of Shoaib Malik, Mohammad Hafeez and captain Sarfraz Ahmed give solidity to the batting while Haris Sohail is a useful player.

Unpredictability: Pakistan’s unpredictability means they can beat any side but they could also lose to weaker teams if things do not go their way. Never was their Jekyll and Hyde character more clearly shown than at the 2017 Champions Trophy in England, where they were crushed by 124 runs by India in their opening match but hit back to beat their fierce rivals by 180 runs in the final. Their 1992 World Cup triumph and World Twenty20 title in 2009 also came against the odds. Coach Arthur said he disliked the tag of unpredictability, asking critics to judge his team as a well-prepared unit and said his side had “fire in their belly”. “Unpredictable is a word that we as a coaching staff hate,” said Arthur. “You read all the previews now, they say Pakistan are going to be in the top four because of their unpredictability. I say ‘no, Pakistan are going to be in the top four because of the work we have put in, in their skills’.” Arthur is entitled to his opinion but fans relish Pakistan’s fluctuating moods. They love not knowing what to expect and the 2019 World Cup will be no different.