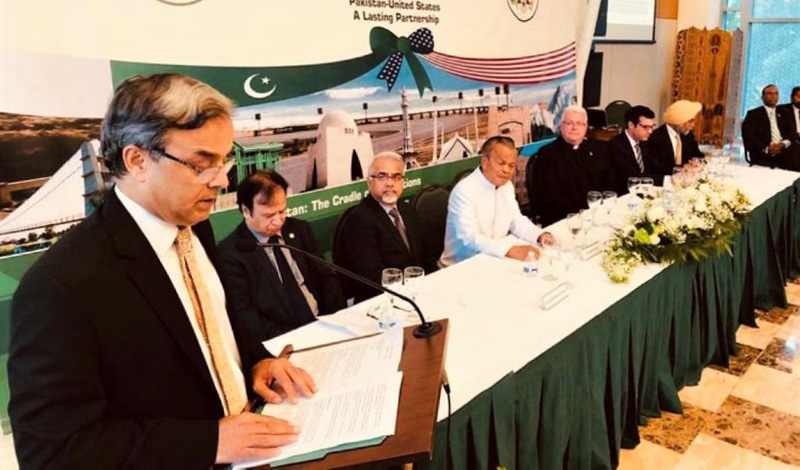 The envoy said this while hosting an interfaith Iftar at the Pakistani Embassy in Washington DC. Welcoming some of Washington’s most prominent interfaith leaders, he shared the blessing of Ramazan and spoke of the need for interfaith harmony, tolerance and understanding between different faiths.

In welcoming leaders from Christian, Jewish, Sikh, Muslim, Buddhism and Hindu faiths, he said, “Pakistan is proud to be pluralistic. It is home to some of the holiest sites, including Buddhism and Sikh… Our architecture is the most historic in the world.”

Dr Asad spoke about the importance of religious tolerance in the diverse world, and highlighted that it was for this very reason Prime Minister Imran Khan was dedicated and committed to promoting interfaith harmony. “It was in this spirit that the prime minister took the historic decision to open the Kartarpur Corridor this year, to celebrate the 500th anniversary of Baba Guru Nanak.”

He described how the Pakistani government was working hard to prevent hate speech and promote religious freedom and tolerance.

“I’m delighted to be here… I have had the privilege to be here over the years,” she said of the Pakistani Embassy’s annual tradition. She thanked the ambassador for opening the embassy to people of various religions. “This is an important time, which allows us to reflect on the beauty of our diversity and our faith,” she said.

She reflected on the political challenges the US Congress faced with the rising number of hate crimes. “In the United States Congress, we are facing the ills of the world, particularly the rise in hatred, the tragedy, the recent acts against the synagogue in California, the burning of churches in Louisiana,” she said. “Peace comes through dialogue, understanding and respect.”

She lauded the various faiths now represented in Congress. “For the first time, we now have Muslim representatives and interns,” she said, and described how on Monday the congress would gather to celebrate Ramazan and all who believed in Islam.