Why is Rakhi Sawant hoisting a Pakistani flag?

‘Even Pakistani people hold a heart in their chest, I have love for them and not everyone is bad’ 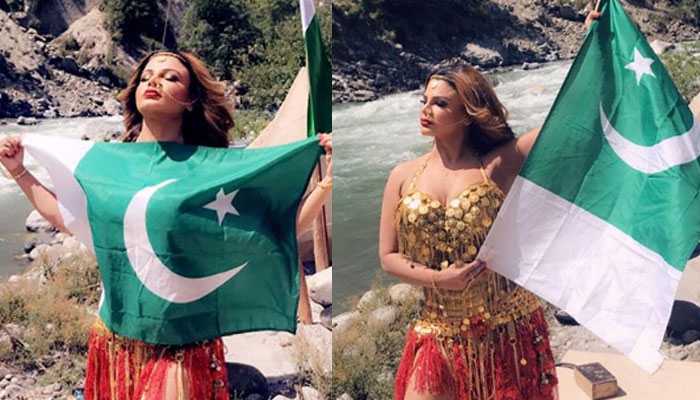 Is the cold war between the two countries over? Not quite so, but the Indian controversy queen Rakhi Sawant has triggered trouble for herself again by posing with a Pakistani flag for her social media accounts. The Indian dancer and model received merciless backlash from the Indian audience and a lot of admiration too.

Rakhi’s shared pictures from her recent shoot on her Instagram account where the dancer is seen in a bold gold sequence dress and a red see-thru skirt with a slit all the way up to her thigh.

The people from India and Pakistan had mixed reactions on her video.

But for some, the war continued in the comment section.

When I saw a movie and got to know that so many Pakistani people help Indians and Kashmiris, I was thankful to such people. I saw Bhajrangi Bhaijan which is also the truth that there are good people in Pakistan who help Indians.

The film Dhara 370 is based on the Kashmiri Pundits and Rakhi as a Pakistani girl expose the terrorist organizations in the movie.

Rakhi captioned the post as: “I love my India but this is my character in the film Dhara 370.

The two countries might still be at war, but love and harmony know no borders.

Aditi Singh, an Indian actress who previously worked with Danish Taimoor for the revenge-thriller movie ‘Wajood’ will now be performing an item number for ‘Chaa Jaa re’-an upcoming Pakistani film that is in the making.

Talking about the item number, the actress said,’ I am going to do this item number because of the love I received during my last stay in Pakistan. I would love to work here with beautiful people in the industry.’