Miandad discriminated against me: Afridi 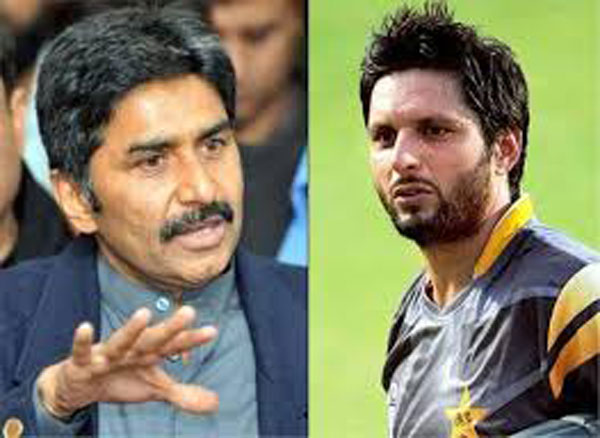 Former Pakistan all-rounder Shahid Afridi’s autobiography ‘Game Changer’ is making headlines as he has made startling revelations regarding his relations with various big names of Pakistan cricket, including former batting legend Javed Miandad. The swashbuckling all-rounder has claimed in his autobiography that the former coach of Pakistan team, Miandad, did not let him participate in the batting practice before the Chennai Test against India in 1999. “The tussle had started even before the series kicked off. Miandad had developed a strong opinion against me…in fact, the day before I went to bat, Miandad didn’t even give me any net practice. So I had to practice on a stringed ball, alone, away from my teammates.” Afridi also revealed that Miandad forced him to praise him during the presentation ceremony, which led to the all-rounder losing respect for the batting legend. “That day I lost all my respect for Miandad, supposedly one of the greats of the game but in reality, a small man.” Former all-rounder also blamed legendary pacer Waqar Younis for Pakistan’s poor performance in the International Cricket Council 2003 World Cup. “Waqar was a mediocre captain who couldn’t hold the team together. He couldn’t fight off the politics inside the dressing room.”

Afridi also heaped praise on the current Prime Minister of Pakistan, Imran Khan for his efforts in trying to restore peace with the neighbor, India. “From his peace overtures (I quote his first speech, about Pakistan taking two steps towards peace if the Indians take one step- an approach I personally believe in too) to opening the Kartarpur corridor and releasing the Indian Air force pilot shot down by the Pakistanis in February 2019- peaceful relations with India are essential. Both countries, even the sub-continental region, will flourish,” Afridi wrote in his book.

Real age: Afridi, as many fans have long suspected, is not as young as official records have had it all these years. Afridi himself has made the revelation in his autobiography. In a chapter in which he describes his call-up to the senior Pakistan team in October 1996, Afridi writes that he was born in 1975. Though he doesn’t give a month or day, that makes him, potentially, five years older than what he is: official records says his date of birth as March 1, 1980. Afridi debuted in an ODI tri-series tournament in Nairobi, and, most famously, hit a 37-ball hundred the first time he batted in international cricket. That record stood for over 17 years and was even more outrageous for the fact that it had been achieved by a 16-year-old. Except, now we know, he wasn’t. Yet Afridi only deepens the confusion in his book with the following line: “Also, for the record, I was just nineteen, and not sixteen like they claim. I was born in 1975. So, yes, the authorities stated my age incorrectly.” If he was born in 1975, that would make him 20 or 21 at the time of the innings and not 19 as he writes. The year 1975 would also mean that he was 34 or 35 when he suddenly retired from Test cricket in 2010, having returned after a four-year absence from the format — as captain – and staying for just one Test. It also means that when he finally played his last game for Pakistan at the 2016 World T20, he was not 36 but 40 or 41.