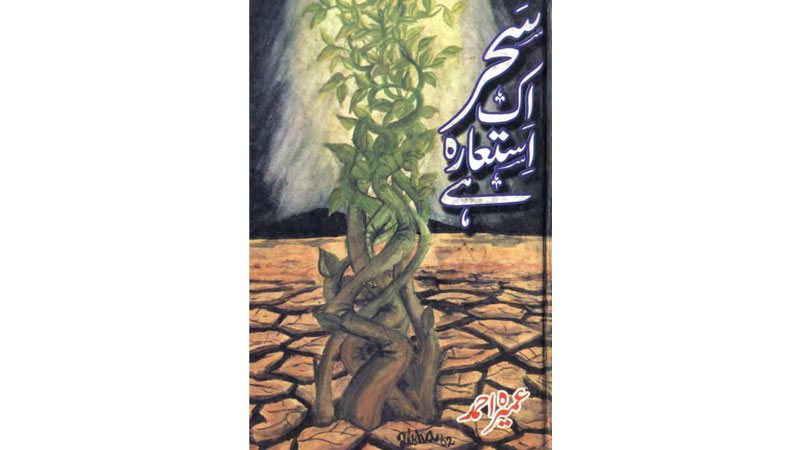 Sehr Ek Istaara Hai was one of the best novels published in 1998 and like other novels of Umera Ahmed, this starts with sacrifices but ends with the happiness brought by love.

The main characters are Maryam, Emaan, Sehd and Hadid. Emaan is the youngest sister of Maryam while Sehd is her childhood fiancé. Maryam plays the role of a perfect sister and a brilliant mother as well. She also plays the role of a loyal wife owing to which she gets happiness at the end of the story.

The story begins with Maryam and her sister Emaan when childhood fiancé refuses to marry Maryam. He wants to marry Emaan. Maryam agrees to the new scheme thinking about the love of her sister and she sacrifices her own life partner. After some time, Emaan seeks divorce after having a two-year old son namely Hadid from the marriage who later on is cared by Maryam. Misfortunes strike Maryam as Emaan now develops an affair with her husband, Sehd. However, this time Maryam is helped by her son who Maryam looked after for more than 20 years; both of them left the house, Hadid got married and had children. On the other hand, Sehd once again married Emaan but the reunion could not make them happy this time because there was not any love.

The story is very interesting that several love stories and sacrifices seem to keep the chain of the novel authentic and the writer beautiful depicts the things as they are. Hadid remained with Maryam which made Emaan and Sehd unhappy because Maryam took care of him as her own child. This is what brings both Emaan and Sehd in such a situation where they suffer a lot as they are deprived of true love. Maryam with her beloved family got the foundation of happiness, pride in their performances as if was she was contented with freedom and joy. How difficult it is when you are deceived by your own loved ones and the same is the true of Maryam who despite being stung by the people, still showed loyalty and normal attitudes. Though it is too tough but Maryam proved her love towards her family and this is the best thing in the book which leaves an impact on readers’ minds.

The story is very interesting that several love stories and sacrifices seem to keep the chain of the novel authentic and the writer beautifully depicts things as they are. Hadid remains with Maryam which makes Emaan and Sehd unhappy because Maryam takes care of him as her own child

Converting a purposeless life into a life full of happiness is the main theme of the book. In such circumstances where Maryam’s life-partner and sisters are against her, her efforts were not wasted as she receives all of the experiences of life such as fear, ignorance, knowledge and love. She is someone who provides lessons to the readers that women’s lives are full of obstacles but she is the one who patiently deals with all these things in a kind and loving manner.

This is a four-story collection book and each section has different stories. The first one is Sehr Ek Istaara Hai. Umera Ahmed provides knowledge and love of wisdom to the readers with her beautiful expressions, using the wisdom of women. They are perfect only if time and condition do support them but the case of Maryam is different. Though she faced hardships, Maryam kept patience and love towards her beloveds. She was deceived by her loved ones. This heart-touching story tells us lots of facts about life being faced by several women in today’s modern world. This also tells the readers that when life becomes purposeless, it needs only attention to deal with the situation as the same is true of Maryam who was completely broken into pieces but she did not made other realise of her sadness but in fact, she showed more love and sympathy to them.

Everything in this book is perfect, except for the twist in the story and likely the conclusion is to solve the problems and makes positive decisions. And, this is what reduces stress and increases happiness to the ones who are reading this short piece of writing. This book suggests the readers that one must be loyal to the people around them.