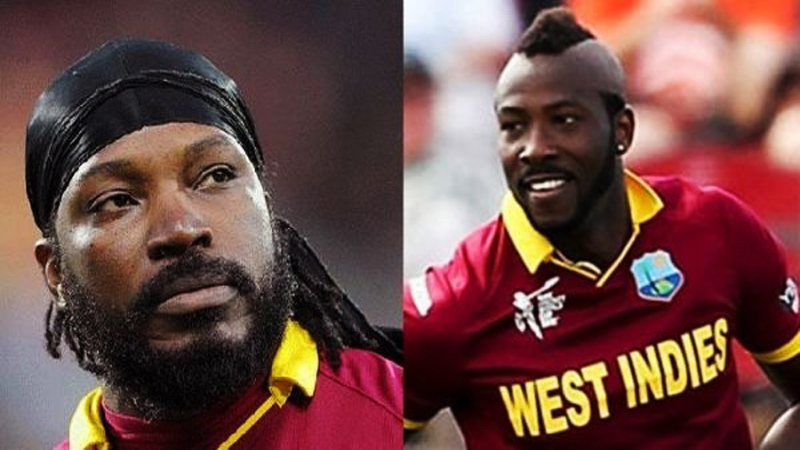 The West Indies named star players Chris Gayle and Andre Russell in their 2019 World Cup squad on Wednesday, although allrounder Kieron Pollard was among those left out. Big-hitting opening batsman Gayle returned to the Windies one-day international side in their 2-2 series draw against top-ranked England earlier this year, scoring two hundreds and two fifties in four innings. Russell did not feature against England and has been struggling with injuries, playing a limited role with the ball in the ongoing Indian Premier League for Kolkata Knight Riders. But he has been in fine form with the bat, and will bring vital power hitting to the middle order for the two-time world champions in England and Wales.

“I spoke with Andre about four days ago and he assured me that he’ll be OK for the World Cup,” said West Indies chief selector Robert Haynes. “He just has a couple of niggling injuries.” Interim coach Floyd Reifer, who replaced the sacked Richard Pybus earlier this month, said Russell was in the squad mainly as a batsman for a team who had to come through qualifying.

“Looking at the IPL, he’s been scoring a lot of runs, so we´re going to use him as a batting allrounder,” said Reifer. “We’ll have to manage his injuries between games.”

Narine out injured: Despite the Windies changing their rules regarding international players needing to play in their domestic competitions to qualify for selection, there were no places in the squad for Pollard or spinner Sunil Narine. Pollard, a veteran of 101 ODIs, and Narine both last played 50-over cricket for the Caribbean outfit in 2016. Narine, who also opens the batting in the IPL for Kolkata, is suffering with a finger injury and does not feel able to play the longer limited-overs format. “We had a lot of dialogue with Sunil and he assured us he would love to be playing for the West Indies, but he has a very sore finger,” added Haynes. “He´s getting treatment after every IPL game, and he cannot bowl 10 overs and is struggling to bowl four.”

Other big names to miss out included Dwayne Bravo, who has been in the international wilderness since 2016, and Marlon Samuels. Young batsmen Nicholas Pooran and Shimron Hetmyer were included, as was Evin Lewis, who missed the England series, at the expense of John Campbell.

Lewis is likely to open the batting with the 39-year-old Gayle, who is just 252 runs away from breaking Brian Lara´s all-time ODI West Indies record and will retire from the format after the tournament. The Windies, who won both their World Cup trophies in England in 1975 and 1979, get their campaign underway against Pakistan at Trent Bridge on May 31. They can amend their squad until May 23, but director of cricket Jimmy Adams said there were no plans to do so after the warm-up tri-series with Bangladesh and Ireland in Dublin.