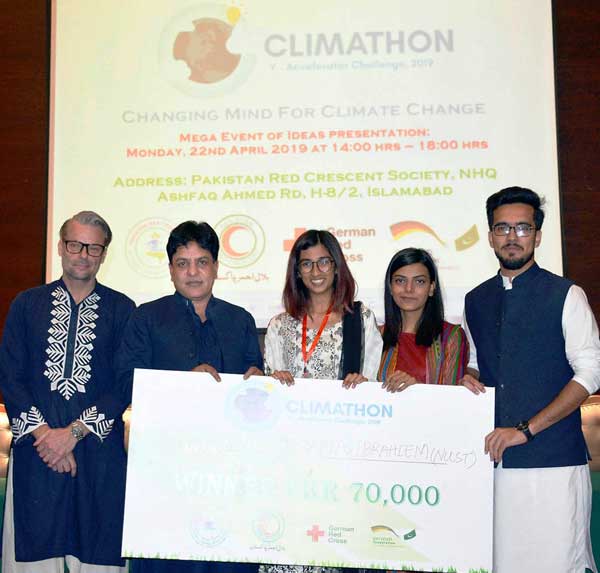 Speaking at the occasion, PRCS Secretary General Khalid Bin Majeed said the Climate Change Adaptation Programme is one of the prestigious endeavours aimed at building capacity of not only people at the grassroots level but also the government of Pakistan. “PRCS being the front-liner in responding to emergencies and disasters with the assistance of its international partners has already taken up the initiative to launch climate smart disaster management to ensure effective adaptation. A few achievements of the project include formulating climate change dashboard, coordination, climate smart DRR tools, and climate education along with nationwide campaign and capacity enhancement program for the grassroots communities, young professionals and policy makers,” he added.

“The Y-Accelerator challenge gives young people the chance to develop business ideas that tackle climate change. This event has brought together investors, founders, and start-up enthusiasts to watch visionaries pitch their ideas and based on the relevance of the selected ideas, the PRCS will assist entrepreneurs to link up with the industry to promote, sustain and scale up the ideas,” the secretary general said.

Speaking on the occasion, Advisor Climate Change Adaptation German Red Cross Hans J Hausmann said the Climate Change Program aims at breaking the vicious cycle of disaster vulnerability, ignorance, low ability and poverty. He said the Y-Accelerator Challenge is based on a concept of pitch model where aspiring and existing entrepreneurs with sustainable green business ideas will benefit.

Shields were awarded to the members of Climathon jury and certificates were distributed among the participating teams.

The event was attended by climate change experts, PRCS officials, volunteers, students, teachers and people from different walks of life.