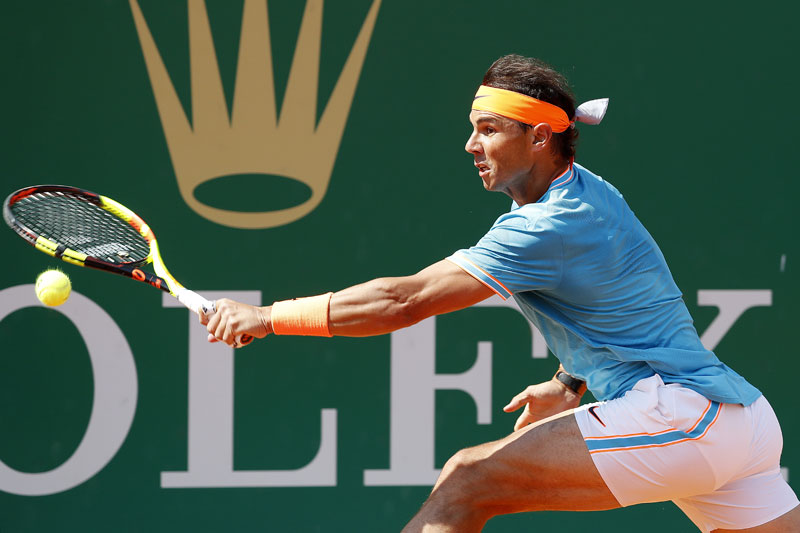 Champion Rafael Nadal and top-ranked Novak Djokovic turned in impressive displays to reach the Monte Carlo Masters quarter-finals on Thursday. Nadal, chasing a record-extending 12th Monte Carlo title, broke Grigor Dimitrov’s serve on four occasions to defeat the Bulgarian 6-4 6-1. After recovering from two break points down in his opening service game, Nadal attacked Dimitrov’s backhand with power and precision to move into a 3-1 lead. The 32-year-old Spaniard continued to extract errors from Dimitrov to claim the first set before racing to his 15th quarter-final on the Monte Carlo clay.

Nadal has now recorded 70 wins at the Monte Carlo Country Club. The only other tournament Nadal has achieved more victories is the French Open, where the 11-time winner holds an astonishing 86-2 match-win record. Second seed Nadal was pleased to have negotiated two top 30 players – Dimitrov and Roberto Bautista Agut – and tricky playing conditions on Court Rainier III this week. “The first two rounds I played more than well enough to win. I had two confident scores against two good players,” Nadal said.

“The second set (there) were a little bit more mistakes and the wind was even (greater) later in the match. These things are part of the game and just try to be ready for it… You have to adapt. You have to find solutions.” After struggling to rediscover his rhythm in his opener against Philipp Kohlschreiber, Djokovic looked in complete control as he swept past Taylor Fritz 6-3 6-0. The 31-year-old Serb quickly adjusted the pace on his groundstrokes to claim three consecutive service breaks and take the opening set. Fritz failed to offer any kind of resistance in the second set and was ultimately undone by his 28 unforced errors. It moves Djokovic within three wins of matching Nadal’s record haul of 33 ATP Masters 1000 titles and he will next face Russian Daniil Medvedev for a semi-final spot.

Medvedev defeated sixth seed Stefanos Tsitsipas 6-2 1-6 6-4, beating the Greek youngster for the fourth time in four matches. “(Daniil) has improved his movement a lot, I think. Obviously his results are showing that he’s close to the top 10 rankings,” said Djokovic. “He’s definitely in the form of his life. He’s had a good tournament so far here, winning quite comfortably in the first two matches and then now against Tsitsipas today.

“We have never faced each other on clay. We have faced each other in a close four-setter in Australia this year… I have seen him play. I have hit with him many times. I’m looking forward to it.” Serb Dusan Lajovic pulled off the biggest upset of the day as he saved seven of the nine break points faced to knock out last year’s French Open runner-up Dominic Thiem 6-3 6-3.