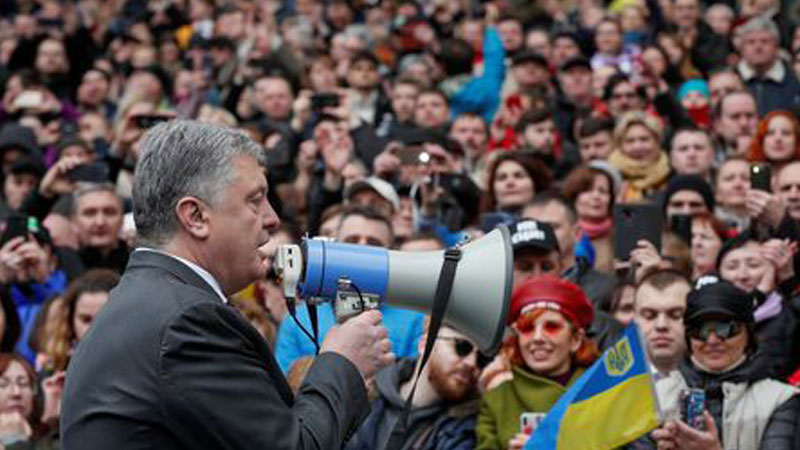 Flanked by rock musicians wearing yellow overalls and black t-shirts with skulls on them, Ukraine’s President Petro Poroshenko pumped his fist, danced to the music and waved to supporters outside a soccer stadium in Kiev on Sunday.

Standing on a stage filled with young people, he sent a message to his absent challenger, the comedian Volodymyr Zelenskiy, ahead of a presidential election run-off on April 21.

“I am pleased that so many young people are with us today. Volodymyr Oleksandrovych, you hear the voice of Kiev, the voice of Ukraine, its youth. The youth is with us. The youth is the driving force of our state,” he said on Sunday.

Poroshenko has rebooted his campaign after Zelenskiy won nearly twice as many votes as him in the first round of the election on March 31, reaching out especially to younger voters disillusioned with corruption and the slow pace of change.

The president apologised for past mistakes like installing business cronies to high office, promised to be more transparent in communicating decisions and pledged to bring more young people onto his staff if voters gave him another chance.

At stake is the leadership of a country on the frontline of the West’s standoff with Russia following the 2014 annexation of Crimea and the outbreak of a Kremlin-backed insurgency in eastern Ukraine that has killed 13,000 people.

If elected, Zelenskiy has promised to keep Ukraine on a pro-Western course, pursue reforms and tackle corruption. Investors view him as something of an unknown quantity but his team has tried to assure them he will keep the country’s loan programme with the International Monetary Fund on track.

In an interview with Reuters on Friday, Poroshenko said his strategy for the first round was reminding Ukrainians to be proud of their country and not listen to Russian depictions of its neighbour as a failed state.

Doing so allowed him to trumpet achievements like securing visa-free travel for Ukrainians to European Union countries, strengthening the army and helping establish a national Orthodox church independent from the Russian clergy.

But for the second round, he has struck a more contrite tone with voters while still painting Zelenskiy as a buffoonish populist.

“First of all, some people are disappointed. And we should open their heart, we should knock on their doors, we should deliver the information that ‘look, we hear what you mean. We understand what you need,'” Poroshenko said.

“Don’t believe populists, don’t believe in the simple decision to the complicated question. May I remind you, we are the country in a state of war,” he said on board his plane between whistle-stop visits to Berlin and Paris.

Poroshenko has also sought to shore up his reformist credentials. He rolled out a long-awaited special court to try corruption cases and fired a regional governor accused of incompetence.

Asked if he had more surprises up his sleeve before the second round, Poroshenko replied: “You consider launching an anti-corruption court as a surprise? I think this is a part of my programme.

“The answer to your question would be definitely ‘yes’. I have some surprise for the last week,” he said, declining to specify. “Otherwise it wouldn’t be a surprise.”

“How useful such dialogue would have been for the president, for social activists, and for the whole of Ukraine, had it taken place sooner,” Daria Kaleniuk, executive director of the Anti-Corruption Action Center, wrote on Facebook after the meeting.

“At the same time, I highly appreciate and respect the president for admitting his mistakes. This is a strong step. Mistakes can be corrected by real actions,” she said.

Poroshenko believes he has time to close the gap on Zelenskiy but he will have to work fast.

A survey by pollster Reiting last week showed Zelenskiy on 61 percent of votes and Poroshenko on 24 percent, and 41 percent of Zelenskiy voters said their vote was against Poroshenko rather than for the comedian.

“The claims that he is going through a renewal are understandable. The logic is to broaden his base, to show that the president is changing. But words are not enough,” said Volodymyr Fesenko, director of Kiev’s Penta think-tank.

“Where to get additional votes will be a big problem for Poroshenko. That’s because the protest vote will continue to dominate.”

A comedian with no prior political experience, Zelenskiy has run an unorthodox campaign that played particularly well with a more internet-savvy young generation.

Eschewing traditional rallies, it relied instead on quirky social media posts, comedy gigs and allusions to a fictional TV series where he plays a schoolteacher who becomes president.

Fighting for that space, Poroshenko launched a channel on the Telegram messenger app after the first round, announcing it on Twitter with a picture of two women taking a selfie with him.

Zelenskiy began releasing slickly produced videos attacking Poroshenko on Facebook and Instagram, that featured pumping music and were reminiscent of his TV series.

Poroshenko responded in kind, releasing his own videos on social media, though they were shot in a more sombre style and had him looking straight to camera.

Zelenskiy has also used social media to crowdsource suggestions from voters on anything from policy initiatives to who should be Ukraine’s next prime minister. In turn, Poroshenko posted a video calling on voters to sign up to a website or phone in their support on a special hotline for keeping Ukraine on a path towards European integration. Lawmaker and close ally Iryna Gerashchenko said the campaign changed communications strategy to bring out Poroshenko’s human side.