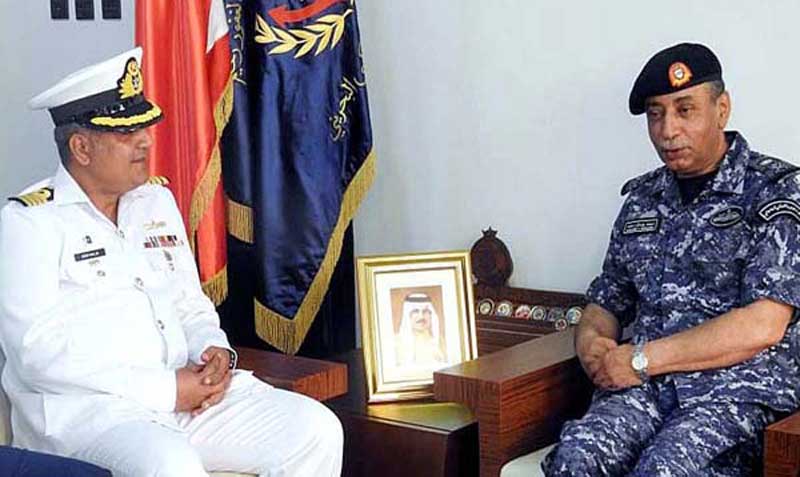 During the stay at Mina Salman, the Commanding Officer called on Commander RBNF and Ambassador of Pakistan in Bahrain. During the meeting with Commander Royal Bahraini Naval Forces, the Commanding Officer conveyed sincere regards from Admiral Zafar Mahmood Abbasi, Chief of the Naval Staff to the Bahraini Navy and the people of Bahrain and highlighted that the visit of PNS SHAMSHEER is a manifestation of the multifaceted long term collaboration that exists between the two navies. During the visit, the Commanding Officer along with key staff officers, also attended the Change of Command Ceremony of Combined Task Force 150 (CTF-150) which was held at HQs US NAVCENT, where Pakistan Navy took over the Command of CTF-150 from Royal Canadian Navy. A reception was held onboard PNS SHAMSHEER. Rear Admiral Yousaf Al Asam, Commander Royal Bahraini Naval Forces graced the occasion as Chief Guest. The reception was also attended by a large number of guests including HE Mr Afzaal Mehmood, Ambassador of Pakistan in Bahrain, Rear Admiral Douglas Beal Vice Commander US NAVCENT/ USN 5th Fleet, Commanders Combined Task Forces 150 & 151, Commanding Officers HMS MONTROSE, HMS BLYTH, HMAS BALLARAT and several key appointment holders from CMF including Senior Naval Reps from Australia, Brazil, Canada, Djibouti, Egypt, Germany, Iraq, Japan, Netherlands, Norway, Philippines, Singapore, Spain, Thailand, UK, US and Yemen. During his speech, the Commanding Officer PNS SHAMSHEER apprised that Pakistan Navy, in line with the Government of Pakistan’s policy, has been a regular contributor to the Combined Maritime Force since 2004 and will continue to do so in the interest of international peace to ensure safety and security of the international waters. He also expressed best hopes for further strengthening the bilateral relations between the navies and peoples of Pakistan and Bahrain.

In the last part of its visit, PASSEX (Passage Exercise) was conducted between PNS SHAMSHEER and RBNS AL FAHDL(P-22) in the waters off Bahrain. Subsequently, the ship resumed its role in RMSP in the North Arabian Sea. The ship will also be operating under the direct support of Pakistan led Multinational Combined Task Force 150 (CTF-150). Pakistan and Bahrain are tied in eternal bonds of religion and brotherhood. The visit by PNS SHAMSHEER will further enhance PN’s bilateral relations with Royal Bahraini Naval Forces in diverse avenues.