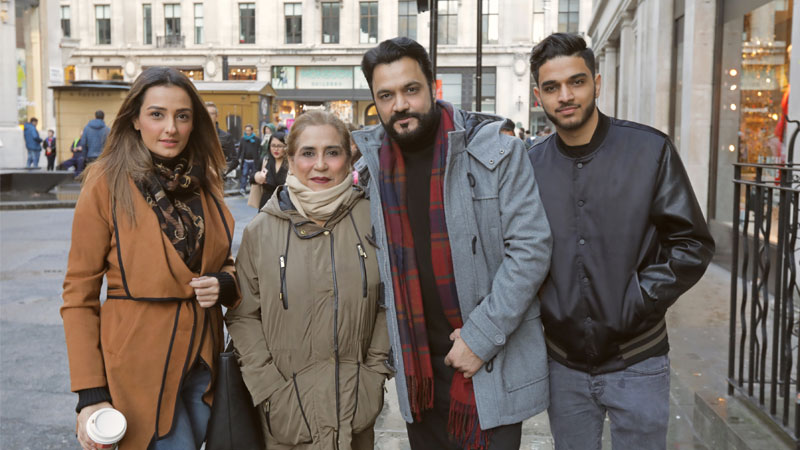 The one-man industry, Yasir Akhtar, is all set to strike back with yet another trendsetting series of films called “Multinational Films”, a project which will be one of its kind.

The mastermind behind countless iconic productions such as “Tapal Cinema” and “Mera Ghar Aik Whirlpool” and popular songs like “Sansani”, “PiyarDiyanGallan” and “Chandni”, having a BBC Music profile will soon be releasing the first film of this series “Azaad”, a presentation of Motion Content Group and Pegasus Productions, completely shot in London. “MultiNational Films” will be shot in the UK, USA, U.A.E, Pakistan and at many other fascinating locations in the world. The project will be centred around different stories on various subjects and will engage talent from various locales in the world. Yasir will cast experienced artists and will be introducing new faces to the media industry from Pakistan and abroad. The films will be aired on various channels and platforms across the world on special occasions, each film being approximately 100 minutes long.

The story of “Azaad” begins from the childhood of two brothers who share different values, the elder brother being Aazer (Yasir Akhtar) and the younger brother being Ayzad (Gagan Chopra) and their mother being Mehru (Parveen Akbar). Mehru escapes from Pakistan to take refuge in London after her husband’s murder. Growing up in East-End London, Aazer and Aazad get to know a few local people who become a part of their family here. Yasmin (Momal Sheikh), a half cast British Asian/Pakistani girl and a next-door neighbour who grew up with Aazar and Ayzad develops a strong bonding with the family. Yasmin is in search of her father whose identity is kept hidden from her by her mother, Nicola (Jodyanne Richardson). Aazer offers help to Jasmine to meet her lost father. Mehru struggles to give her boys a secure lifestyle, showing the tough struggles of a single mother in a totally new culture. The story takes a dark twist when Dilawar (Imran Ali Asad), the cousin of the two brothers arrives from Pakistan to London. Overpowering emotions shared between the family of three, a love triangle between the two brothers, clash of cultures and values while living in the West and still breeding eastern values, “Azaad” captures the true colours of traditional, edgy London lifestyle.

Yasir Akhtar says,”Parveen Akbar is playing our mother. She is extremely professional, intelligent and an outstanding actress. We shot “Azaad” in last December. It was extremely cold, due to which Momal Shiekh had to wear extra layers to be warm but she gave her best shots. One of the most memorable scenes of “Azaad” is shot at Trafalgar Square, where she brings a muffler for me as a present. We both did some breath-taking scenes around Windsor Castle. The camera loves her. Momal is playing a role of a radio presenter in search of her father”.

“Azaad” will have a background song, “Saiyaan” written by Irfan Saleem and performed by Yasir Akhtar himself. The soundtrack’s music is by Zahid Ali, the additional music and final mix having been been done by Sohail Anwer (Sohail Keys). The background music and content head of “Azaad” happens to be Aabid Omer.

“Azaad” will also launch the careers of two budding actors, Gagan Chopra from London and Imran Ali Asad from Glasgow. Yasir took auditions for this project in Birmingham, London, Bradford and Manchester. He says,

“It’s a big challenge to cast newcomers and make them successful. I have given breaks to actors like Humayun Saeed, Shamoon Abbasi, NidaYasir, Javeria Abbasi, Armeena Rana Khan and this project of mine will also launch new artists from across the globe.”

Also, Yasir Akhtar says, “Motion Content Group has an extremely professional way of dealing with projects. I am deeply thankful to Fouad Hussain, Imran Hussain, Misbah Shafique, Zunairah Rafi for their sincere co-operation and support. I am deeply thankful to my lovely wife – Lubna Akhtar who is also the major force behind Pegasus Productions all these years. She has been working successfully as the executive producer for years. “Azaad” has been written by Roommy Zahid from Bradford. He is also a dear friend, an amazing writer and an extremely talented individual. We have worked on some projects together in the UK. Initially, I contacted him with the storyline and then we developed the scenes. Later he worked on the dialogues and the script. I will be giving more chances to new writers in “MultiNational Films”. Our producers, Shaista Iram Zahid and Zahid Hamid have always gone out of their way to make our productions successful. The camerawork of “Azaad’ has been brilliantly done by Hayat Khan. KeremIsik has engineered the sound skilfully. Zahed Tarafdar and Hira Tehseen have worked hard as assistants. Rabia Arshad and Hira Tahseen have played a very interesting role too. I am deeply thankful to the entire team of “Azaad”.

While Yasir Akhtar will be directing most of the “MultiNational Films”, he may also join hands with other talented directors. He says,

“In acting, I would love to make special appearances in some of the films besides the major roles and I might also try some experimental characters.”

Incorporating all forms of art in the films, songs, drama serials, shows and performances has been Yasir’s forte. Yasir’s productions are always ahead of their time and a treat to the eyes. Yasir is at the forefront of setting more milestones. The viewers will watch a high standard of production, meaningful scripts, beautiful locations throughout in this series of films called “MultiNational Films” starting with the block-buster, “Azaad”. “MultiNational Films” will be a start of a new era, a new trend and style of productions.