* The first episode has already received a very positive response with over 3.5k subscribers within just a few hours of airing 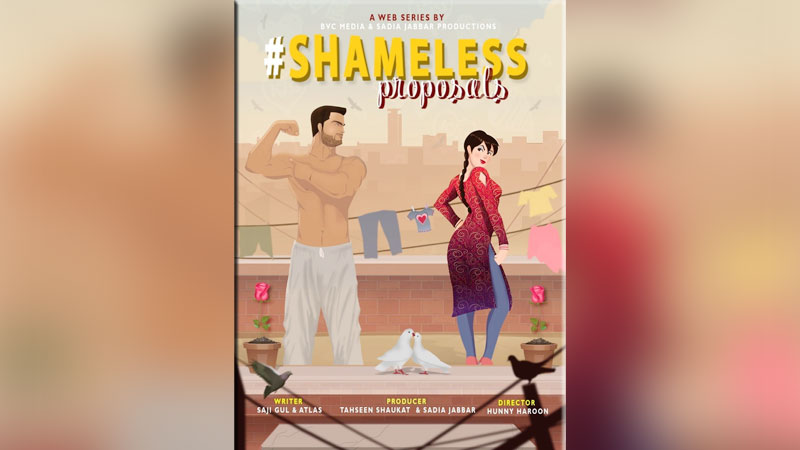 Sadia Jabbar Productions has taken over digital media with ‘Shameless Proposals’, to raise awareness about our flawed arranged marriage system, depicting what a corrupt method it is for girls who are mostly given no choice when it comes to choosing a life partner.

The web series ‘Shameless Proposals’, is written by Saji Gul, directed by Hunny Haroon and produced by Sadia Jabbar.

Their first episode has already received a very positive response with over 3.5k subscribers to their channel within just a few hours of airing.

If you have not seen the first episode, watch it now! Episode 1 is titled ‘Macho Man.’

Episode 2 is titled The Flirty Perfect Boy who describes himself as a tharki degree holder.

The episode begins with a pervert in for a proposal, whose behavior can be best described as someone who sexualizes everything, as we see him winking and making inappropriate gestures from the very beginning.

As the mother of our “mashriki girl” observes the guy, our immediate thought is that she will dislike him. But we forget that this is a satirical episode and the unexpected response we get from the mother is that he is a perfect match for her daughter. In fact, she is disappointed that her own husband is a little too well-mannered for her taste! The Daadi reinforces how such blatant flirting is just a show of masculinity, which should be appreciated, as it was exactly the way her own husband was.

This response is a message well delivered by Shameless Proposals, on how easy it is for us to ignore such behaviorand make up excuses for it, under the label of masculinity or ‘innocent’ fun.

If you have not seen the first episode which was titled Macho Man, watch it now!

As the parents of our mashriki girl ask the guy more details about him, the episode opens our eyes to another dark side of our society and what girls go through on a daily basis.

The guy proudly announces that he does ‘social work’ – dropping girls from home to their destination and back. This is a very common issue in reality where men shamelessly stare at women on the streets to the point where they cannot see them anymore. The walk for a woman becomes unbearable as she becomes aware of their dirty gaze.

To add to the filth, the guy also proudly tells that they do not leave any woman behind; whether the girl is married, single, divorced, with kids or of an older age, they would gaze and hit on everyone equally and with the same dirty mindset.

The episode ends with a powerful message from the girl standing up for herself, telling off that tharki boy with a conviction that women are not to be sexualised for their body. They have a heart and a mind of their own and they deserve respect and the right to walk on the streets without being stared at or catcalled.