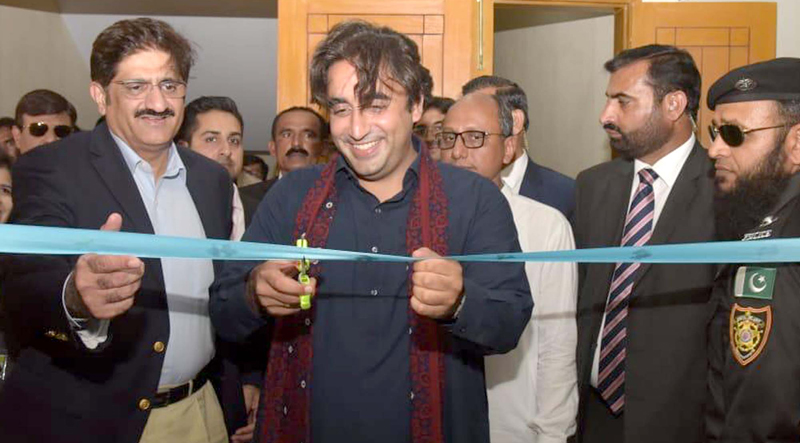 Chairman Pakistan PPP Bilawal Bhutto Zardari has said that the establishment of Center for Autism Rehabilitation and Training Sindh (C-ARTS) in public sector was a great achievement of Sindh government.

While addressing a gathering organized to inaugurate C-ARTS at Gulistan-e-Jauhar, Karachi on Saturday, the Chairman PPP said that rehabilitation of the children with autism was a gigantic task and involves some dedicated professionals who have not only know the delicacy of problem but must have a tender and loving heart. “The children with autism need our love, care and affection for rehabilitation,” he said.

He appreciated Sindh Chief Minister Syed Murad Ali Shah for establishing such a beautiful center when more 15,000 children have been enrolled. “I quite happy to see the parents of the children with Autism are being given training to handle their children,” he said and added this state of art institute would flourish and provide its best services because it has a best team to run and look after it.

Sindh Chief Minister Syed Murad Ali Shah addressing on the occasion said that Autism was a neurological development disorder which was characterized by deficits in communication, social interaction and repetitive behavior.

Quoting Center for Disease Control and Prevention (CDCP) reports, Mr Shah said that the prevalence of Autism spectrum disorder was in one in 168 children in United Sates. “In Pakistan although statistics are not available to us but by the number of cases reported in government and private sector indicated autism to be at a rise in our country.”

He added, “thus there remains an urgent need is to have trained professionals who can diagnose the condition and then rehab specialist who can provide treatment facilities, in government sector to children with autism.”

The chief minister said that the provincial government has always maintained the health of its people as an utmost priority, even more so where children are concerned. “So it gives me great pleasure to announce that the center (C-ARTS) formally inaugurated by Chairman PPP Bilawal Bhutto Zardari is first of its kind in Pakistan,” he said and added the government institution that would cater to children of all ages with autism, it would be home to the world’s best practices.

He said that too long have private institutions taken advantage of desperate parents and charged astronomical rates. The C-ARTS would provide all those services and more free of cost, he announced.

Earlier, Dr Nabila Soomro briefed the chairman about different stages being adopted to diagnose the the problem and rehabilitate the affected children.

The Chairman PPP Bilawal Butto Zardari cut the tap to inaugurate the newly constructed multi-story building of the C-ARTS and then visited different class rooms. He affectionately interacted with the children with Autism in the class rooms.

The children with Autism presented tableaus on national song and to welcome PPP chairman Bilawal Bhutto. The parents of the children also spoke on the occasion and said that they had been taking their children with autism to different private institutions but failed to receive such amazing services as were being provided here. They also lauded the efforts of Sindh government.