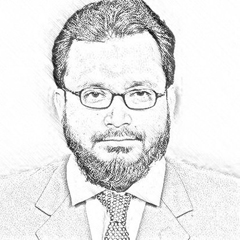 Murder in the first world

Prosperity, security, justice, higher education and civil liberty are those lucrative incentives, offered by the “First World” that impel the people of the third world countries to say farewell to their homeland and settle in a foreign country for good, hoping if such there breath, go, mark them well! It is the irony of fate they have been killed in cold blood in their desired land or the world of dreams.

The recent heartbreaking act of terrorism caused 49 worshippers dead and 20 injured in two mosques in Christ Church, New Zealand. Metaphorically, it is just like being shot dead, despite wearing a bulletproof jacket.

This brutal act left everyone extremely shocked and crying, by creating the saddest scenario of helplessness. The exotic image of the first world has severally damaged after the incident, as no world is called a perfect world; an evil soul can reach anywhere!

What remains? Nothing! But an incessant lamentation over the most painful grief or a continuous heartbreaking over a grievous pain. Some beautiful memories, attached with the killed ones that could be faded away with the passage of time.

Thomas Gray rightly said, “For them no more the blazing hearth shall burn, or busy house wife ply her evening care”.

No children run to lisp their sire’s return, or climb his knees the envied kiss to share.

No religion provokes vengeance, extremism, hatred, superiority of race and class difference. All religions testify the equality of all human beings as well as the sanctity of human life

It is not the last attack though it has provoked an emotional impulse throughout the globe and every one is showing sympathy, love and solidarity with the suffered families of the martyrs.

The main figure in this context is the Prime Minister of New Zealand Jacinda Ardern, meeting, and consoling the bereaved families by all means. However, this act of kindness soothes the broken hearts for the time being, but it isn’t the ultimate solution of this deep rooted issue. It is based on ‘hatred’ that leads to the extremity.

Such types of deep-rooted problems must be solved on the basis of rationality, critical thinking and on the intellectual ground.

No religion provokes vengeance, extremism, hatred, superiority of race and class difference. All religions testify the equality of all human beings as well as the sanctity of human life.

If there is an element of ‘Hate’, so, it is for ‘committing sin’ as stated by Martin Luther, “Sin is essentially a departure from God”.

Otherwise, the diversity of colours and languages exist just to beautify this world through its various manifestations. What is to be required urgently, is to spread the true message of religion that we all human beings are bound up by the tie of sympathy. We exist to spread smiles on gloomy faces and to ignite the ray of hope into the broken hearts.

It is the call of time for all the intellectuals, scholars, philanthropists and rationalists of the world to play their significant role to help the world to climb out of the abyss of terrorism and extremism through utilizing their most convincing power, they are endowed with, as this world is worth to live and we should struggle for that…

Efforts must be made to explore out the spiritual and aesthetic aspects of the religion that enable us to enjoy our own existence. Besides, enhancing an urge to enjoy eternal pleasures of paradise and to warn against the blazing fire of the hell, our religious scholars must tell us about the most radiant beauty of human soul that could be appeared by the sincere worship, one offers out of love of God.

Beauty of nature should be a part of religious teachings as, the creator is known by his creations. The prevailing elements of this glorious nature are; beauty, love, harmony, growth and strategy of ‘mind one’s own business’, as it can be seen in the unique nature of honeybee and the spider (They are always busy in making honey and web respectively).

There is always worth to be done and much to be known. Religion has basically been revealed to make both worlds beautiful and secure. There is no sense to shed blood in the name of religion. Mankind must create a sense of mutual understanding otherwise life would be intolerable and harder if living with nonsense contradictions and discords.

Ignorance is the mother of all evils. The real freedom is the freedom from ignorance. The greatest philosopher of his time; Socrates, once said, “There is only one good, knowledge and one evil, Ignorance”. Terrorism and extremism are the worst display of egotism and egotism is the most dangerous form of ignorance.

The essence of worship is to surrender one’s ego before a Super Ego. In the way, religion intends to save humanity from any outburst of egotistical attack (of a cynic), like the incident of Christ Church Mosque!

May Allah save us all.

The Writer is working as an Assistant Professor at Govt: Degree Boys College Shahdadpur