PPP to march on Islamabad

* Bilawal says Imran Khan is terrorising people with price hike
* Asks Asad Umer if he is a finance minister or an 'economic terrorist'
* Zardari says 'selected' prime minister's bubble has burst
* If given more time, Imran Khan will push Pakistan 100 years back 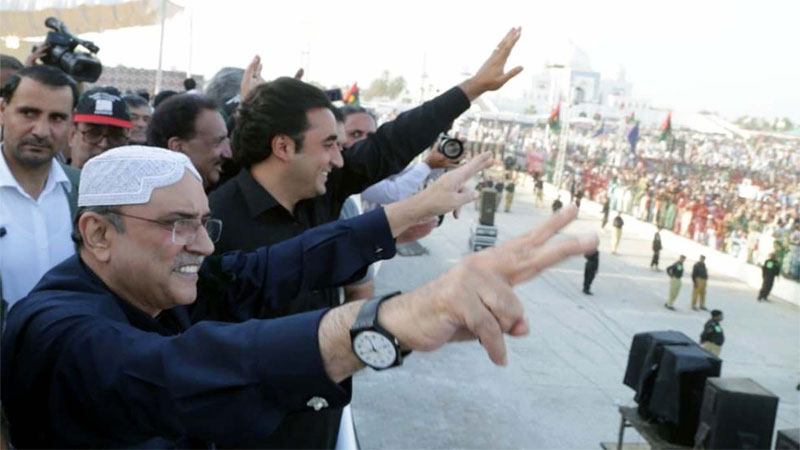 The Pakistan People’s Party (PPP) on Thursday threatened to march on Islamabad to topple the ‘selected’ government of Prime Minister Imran Khan.

“The selected prime minister says the federation is bankrupt because of the 18th Amendment. He doesn’t know that strong provinces are the foundation of a strong nation. You can’t repeal the 18th Amendment. I am warning you, if you try to repeal it, I will … end your government,” Bilawal Bhutto Zardari told a gathering in Garhi Khuda Bakhsh on the occasion of PPP founder Zulfikar Ali Bhutto’s 40th death anniversary.

Bilawal warned the prime minister to not attempt to repeal the 18th Amendment. “Those who are sitting in the Prime Minister’s Office have become a symbol of arrogance,” he said. “Those who are parading the idea of Naya Pakistan should first understand the foundations of the old Pakistan,” he said, and reiterated his party’s stance that the PPP would stand steadfast against the PTI government trying to amend the 18th Amendment. He went on to say that the PPP will not allow a one-unit system in the country in line with the PPP founder Zulfikar Ali Bhutto’s political stance. “Bhutto Shaheed had said that if a One Unit [system] was brought, then he would just be kicking it away. Today I say that if 18th Amendment is rolled back or efforts are made to impose One Unit, then I will kick away the government,” he said. Bilawal slammed the prime minister for having reportedly said that he does not need Sindh. “He (PM) says he doesn’t want Sindh. You don’t want Sindh? Sindh also doesn’t need you. He only wants Sindh’s resources, and its gas. He wants to take away the rights of Sindh, steal KP’s assets, and keep Balochistan deprived.

Provincial governments make provincial decisions, and this is how nations are strengthened but this is beyond this puppet prime minister’s understanding,” he said.

Bilawal said people are being terrorised with price hike. “He [PM] is terrorising the public with hiked up prices,” he said, adding that the people are fed up of Pakistan Tehreek-e-Insaf (PTI) policies. “The public wants relief, not a rise in the price of basic necessities,” he said.

“Since PTI has come to power, they have done nothing with sincerity, except lying. There is a tsunami of inflation. Everything is getting expensive,” Bilawal said. “The finance minister says that their economic policies will make the people scream [with agony]. He says he doesn’t know anything about agriculture. I want to ask: is he a minister or an economic terrorist?” he continued. “People are being rendered homeless due to encroachment measures. Someone tell them that economy is not run on charity or magic.

When we try to show them the mirror, they start NAB-gardi. But do they think that Bhutto’s grandson can be threatened; that Benazir’s son will be scared; and that PPP workers will run away? We will fight together, struggle together and complete Benazir and Zulfikar Bhutto’s incomplete mission,” he thundered.

Bilawal asked why justice for ZA Bhutto’s ‘judicial murder’ has not been served despite four decades having passed by. “Today is the 40th year of Zulfikar Ali Bhutto’s judicial murder,” he said. “This is a tragic chapter of the history. This day is asking a question from this country: why was the protector of poor public murdered? He opened the way for 90,000 prisoners to return home, he turned this country into an atomic power. Who signed his death warrant? That question is still awaiting an answer,” he continued. “The [former] president submitted a request eight years ago that we should get answers for the murder of our founder. Why do the scales of justice tip one side when it comes to us [Bhuttos]?” he asked.

Bilawal said the cases against him are also based on ‘false allegations’, and claimed that he has not been given a fair chance to present his answers in the court. “I have not been able to record my statement before any court,” he said. “All I get are three minutes [to speak] before the court and then they say ‘this is something we never heard’. I want to ask the honourable judges to summon old transcripts and recordings,” he added.

The PPP leader questioned why the Supreme Court took a suo motu notice of the fake bank accounts case. “The Supreme Court’s power of suo motu is only exercised in human rights cases or legal complications,” he noted. “Why was it exercised in this (fake accounts) case? The reason given was that the progress of this case was slow, even though the case was being heard in a banking court and the FIA had even presented an initial challan. [By that argument], aren’t missing persons, Zulfikar Ali Bhutto and Benazir Bhutto murder cases also proceeding slowly?” he asked. “I am not saying that don’t hold anyone accountable but don’t use accountability to hide your sins or as a revenge tool,” he added.

“When I ask why the NAP (National Action Plan) is not implemented, and why do federal ministers have close ties to militants, a movement to declare me as anti-national is started. I demanded the removal of that trio but Khan instead appointed a man who is nominated in cases from Daniel Pearl to Benazir’s murders,” Bilawal said. “They can’t tolerate Benazir, so much so that they want to remove her name from the Benazir Income Support Programme. They actually want to end the programme but Benazir is not a person, she is a mission,” he asserted.

PPP Co-Chairman Asif Ali Zardari urged his party’s supporters to ‘march towards Islamabad’ and oust the government. “Before the elections, I told you that they want to repeal the 18th Amendment,” Zardari said. “That’s why they are lodging cases against us. At the time, some friends believed me and some people made fun. Now you have seen that the selected prime minister’s bubble has burst. He said he does not have funds. If you can’t collect funds through the FBR (Federal Board of Revenue), then leave,” he continued. “It is time for us to march towards Islamabad and oust them [government]. I don’t want to do this because I want to be in government; [it is because] he (Prime Minister Khan) has already taken the country 50 years back. If we allow him to remain, he will take us 100 years back.”