Since its inception, Pakistan has suffered from multiple issues that impede its national growth. Among all leading problems, malnutrition has become a burning matter in the country. Pakistan has seen a colossal challenge in the development process due to dearth of nutrition. It has led the country towards the end of all progressive agendas. The sensitive problem has always hit the country’s image in all angles. Malnutrition is one of the leading matters that create only mayhem and chaos in the world scenario. A big chunk of world population has been reeling under the vicious cycle of malnutrition. According to the WHO, poor nutrition is the single most important threat to the world’s health. According to the Food and Agriculture Organization (FAO) of the UN, the number of undernourished people in the world stood at 841 million in developing countries in the early 2000s. It clearly alarms and knocks the doors of the world community to join hands together to fight against the very menace. 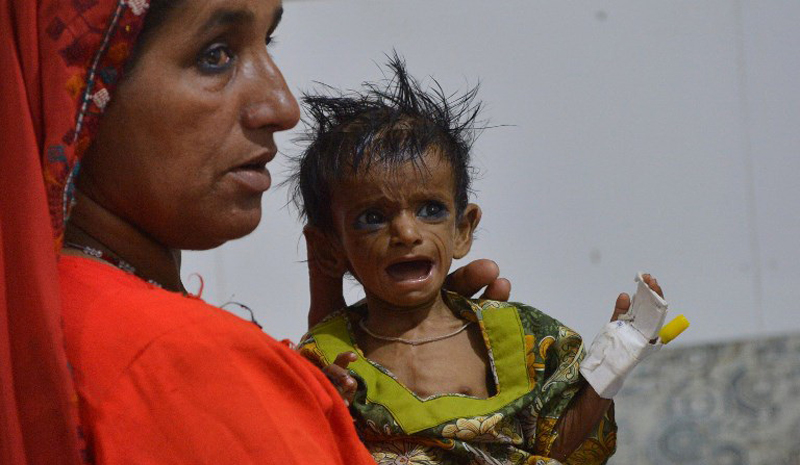 Similarly, Pakistan is one of the countries that bear the brunt of malnutrition— draught-like situation. This is also supported by a report prepared by the United Nations Children’s Fund and the World Health Organisation, which highlights how the prevalence of stunting – a reported consequence of malnutrition – has dropped considerably in India, China and Bangladesh, except Pakistan where the issue has been exacerbated. Another leading report of Human Development depicts that the 14.6 million population of children suffer from the menace. Besides, a great number, approximately, 43.7 per cent children face chronic malnutrition. It is an open secret that 3.3 million children have acute malnutrition problem. Other 1.3 million people are malnourished and need therapeutic care. Proper investment on healthcare and working efficiently for nutrition have been need of the order to ease humanity from drought and famine.

However, the world states have also been bearing the brunt of malnutrition. From the entire world population, 6 per cent population is from Pakistan. As out of entire Pakistan’s population, Balochistan stands on first with 52 per cent population under the radar of malnutrition. Another report shows that 45 per cent population has been suffering from anaemia. Besides it, 29 per cent women are facing iodine deficiency. Painfully, the above-mentioned statistics explains the bleak picture of governance regulation. Balochistan has always been a neglected area in Pakistan in terms of several human rights. Owing to such challenging problems, the province has lost thousands of its citizens under venomous diseases. Like Punjab and Sindh, Balochistan lags behind the formulation of any legislation regarding the long-lasting evils.

It is time Pakistan conducted the series of the already drafted commissions, plans and agreements in favour of the elimination of malnutrition

Like Balochistan, Sindh has also been sent into the lurch of malnutrition. Under the lethal situation, the province has seen an extensive quagmire in all walks of life. Sindh is severely affected by intensifying malnutrition and stunting indicators. As many as 48 percent children under the age of five are stunted while 35 percent of them are severely stunted. However, the incidence of global acute malnutrition (GAM), a measurement of the nutritional status, in Tharparkar is 22.7 per cent followed by Sanghar (16pc) and Qamber-Shahdadkot (13.8pc). The condition is worsening despite the Accelerated Action Plan (AAP) on stunting and malnutrition that the province has recently adopted. AAP aims to reduce stunting from 48 per cent to 30 per cent by 2021 and to 15 per cent by 2026. It plans to expand the coverage of multi-sector interventions to reduce stunting. Sindh authorities have formed compulsory iodisation of Salt Act in 2013, prohibiting the manufacture, processing or import of edible salt with an iodine content less than 30 parts per million (ppm). This step is worth-mentioning and should be implemented timely.

Furthermore, KPK is also grossly affected by this daunting threat. As per the statistics, the ratio of malnutrition exceeds 40% in the province. A whooping number of 1.8 million children are down with stunting in KPK. Back in 2018, round about 4 thousand children were reported to have died of malnutrition and meagre healthcare facilities during 6 months’ period. Unfortunately, 2259 deaths of infants were caused by this deadly disease, out of which 1720 children died when they were only a month old. Simultaneously, 178 pregnant women also lost their lives in KPK. Hence, the afore-mentioned figures evidently manifest the magnitude of this severe issue.

Looking at the widespread lush green fields of Punjab, it seems quite unlikely for it to have any scarcity of nutritious food. As a matter of fact, malnutrition is a complicated quagmire in Punjab which extensively affects infant mortality.Food insecurity in Punjab is considerably high. A survey in 2014 revealed that 34 per cent of children under 5, suffer from underweight problems, 33 percent are stunted and 18 percent are wasted. One of the leading causes of malnutrition is maternal health which directly affects foetus and child’s nutrition. According to the National Nutrition Survey in 2011, anaemia has risen amongst Punjabi women from 37 percent to 48 percent owing to inadequate diet. Breast feeding practice is not only an ideal source of nutrients but also it combats multiple diseases in infants. It also determines the quality of a child’s health later in life. But largely mothers in Punjab do not properly practise breast feeding and mostly stop it even before 6th month of the baby. Nutrient deficiency is the most common factor causing undernutrition. Research proves that Punjab is severely stricken by micronutrient deficiencies among children which includes deficiencies of vitamin A, vitamin D, zinc, iron etc. These nutrient deficiencies ultimately result in stunting and malnourishment in children.

As a result, it is analysed by above-mentioned facts that Pakistan has seen a colossal repercussion of malnutrition for a long time. Rightly, nutrition is always considered as the sine qua non of every human being. However, it is time Pakistan conducted the series of the already drafted commissions, plans and agreements in favour of the elimination of malnutrition.