Web series ‘The Umbrella Academy’ is a story of broken heroes

* The web series is based on the lives of super heroes, developed by Steve Blackman and Jeremy Slater for Netflix 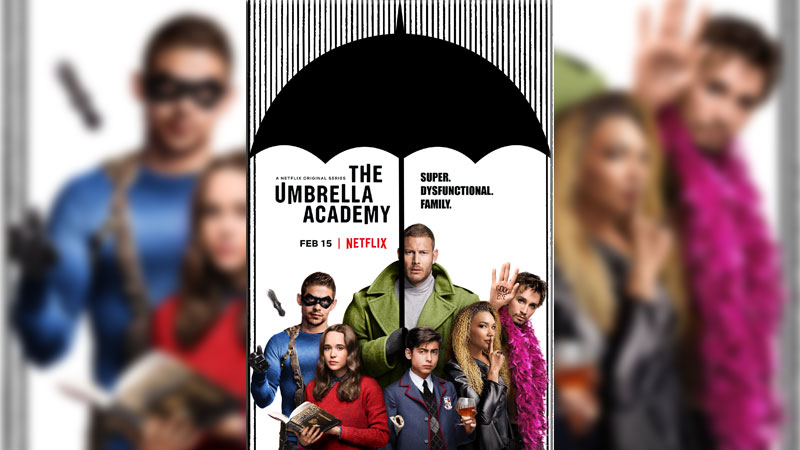 Any system of discipline is hard to deal with since it is based on cutting individual freedom and when it comes to educational institutions they are far rigid than any other.
This academy gave such a tough time to its students that you’ll probably start liking your own academy.
The web series are based on the lives of super heroes developed by Steve Blackman and Jeremy Slater for Netflix. The show is one the most popular on Netflix. It is an adoption of comic book series written by Gerad Way and Gabriel Ba.
The story shows that 43 babies are born to mothers who are not pregnant at all. Seven of them are purchased by an eccentric scientist. He trains them to fight evil. What’s more interesting is the fact that they are conceived and given birth to in a matter of minutes.
All these children are trained in a certain way, with coercive force to be perfect, the house in which are they trained and lived is called “The Umbrella academy”. Everything is eccentric about this academy the children are raised by an android mother and talking chimpanzee. The children are named by the numbers such as number one, number two etc by their father however nick names were given to them by their robotic mother.
Series start with reunion of all these siblings back to academy apparently for their father’s funeral and basically for an epic heroic cause, the academy they had left in teenage because of their controlling father.
This is the story of dysfunctional family and nature of its relationship revealed as the show goes on. The reason why they are the way they are. All siblings have supernatural powers except number seven allegedly. Number one is a big guy with grumpy giant body, sent to moon for four years, the number two can manipulate the knives in his wanted direction, number three can control mind by saying phrase “I heard a rumour”, number 4 Klaus, can speak with the ghost, number five can travel through time, number six can was died in some accident but his ghost remain with Klaus as his consciousness. The last one is number seven she is always told that she does not have any powers. It is for now readers to find out if this is truth or not.
Conflict of the story reveals in 1st episode when number five return from post apocalyptic time he has spent 27 years in future searching for the cause of apocalypse. He mission along with the full force of academy is to stop the apocalypse.
He comes back trapped in 15 year old body in an age of 57. The character is brilliantly played by 15 year old Aidan Gallagher. It was difficult task to do a character which is far older and mature than you actually are more importantly to create a harmony with that old character, but you will be amazed his performance. His confidence and dialogue delivery will put in wonder.
Apart from the jaw dropping performance of Aidan Gallagher as number five there is another actor who bring the fictional character to life, Robert Sheehan, he played his character Klaus with the such a delicacy and veracity that he can be said as heart of the series.
He owned his character not mentally but physically as well. Number 5 can speak to the ghosts he can only do this when he is sober. He is trained from his very childhood, locked up in dark rooms by his father so he will be able to connect to the ghosts and spirits. Thus he is the most vulnerable character with the traumatic childhood. In sobriety he gets haunted by ghosts all the time so he takes drags to escape from the ghosts and from the pain.
The visual on play of his experiences of multiple encounters with the ghost shows the brilliance of cinematography. Through his character the suffering of people is depicted, people who have to take drugs to escape the uneasy painful reality. Another thing which distinguishes his character from other’s is his  personal charm and complete denial in worst possible scenarios you will see him cracking jokes, blurring lines of wardrobe and sarcastically smiling all the time. He is messy, he is chaotic but he is in constant change.

The story shows that 43 babies are born to mothers who are not pregnant at all. Seven of them are purchased by an eccentric scientist who trains them to fight evil. What’s more interesting is the fact that they are conceived and given birth to in a matter of minutes

He is a fine blend of comedy and tragedy in himself.
I consider Umbrella academy is an allegory for the modern parenting. The idea of making your children best of all,  their father is trying hard to make them their best possible version and in pursuit of making them best he ended up making a bunch of supernatural heroes who are celebrated in  outside  world but inside home, the family is dysfunctional, there are daddy issues mommy issues and sibling rivalries.
When parents want their children to be perfect, they forget the fact that human is an inherently flawed creature and we need to teach our children to be more comfortable in their own selves.
Some actor worked better than other and put their whole effort in like Robert Sheehan and Aidan.  Supporting characters include Mary J Blige as Cha Cha and Cameron Britten as Hazel  both were professional  assassinates, is again in my opinion represent the capitalist system when you are just working without knowing what are you working on and taking commands from the masters and obeying them blindly, as Hazel represent a desire to break from this system.
Direction of the series followed by visual timing is an amazing job which involves the scenes involving time travels of number five, action and slow motion scenes along with split scenes are used as an expressionist technique. Light is also used for same purpose to give rise to a hidden symbolic meaning as during 1st ten minutes of episode one in a scene number seven is showing playing violin in dark shadows and introducing all characters under the tone of that sombre tone, which says a lot about her character and her relationship to other characters.
Show is not slow and steady, the narrative is not linear it is rather moving, turning and twisting it will leave you to a point you’ve least expected. It wound have been better if there had been some detailed scene from the childhood of these heroes. We come across their childhood only in some flashbacks which does not suffice their current broken selves.  Having discovered their powers during the childhood and master them in adulthood they are now trying to be more human.
Overall, the series are best for sci-fi geeks as well as for the people who enjoy seeing fallen heroes. ‘The Umbrella Academy’ is a critique to quixotic parental expectations with a flamboyantly compelling narrative and tragically beautiful characters.
The writer is a student of English Literature at Government College University. She can be reached at fizagc731@gmail.com