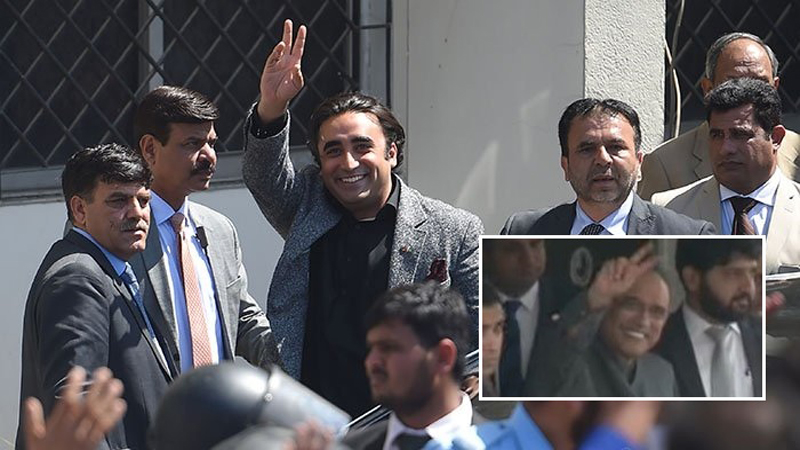 A press release issued by NAB said Bilawal and Zardari were questioned by the combined investigation team (CIT) under the supervision of DG NAB Rawalpindi Irfan Mangi for approximately two hours in three cases. The NAB also handed a questionnaire to the two leaders regarding the three cases and informed them that a response should be submitted to the CIT within 10 days.

The press statement maintained that the NAB will legally evaluate the responses submitted by the two leaders on Wednesday and those to the questionnaire provided to them and decide if they are to be summoned in these three cases again. It added that the investigation was being done under the direct supervision of NAB Chairman Justice (r) Javed Iqbal. A private TV channel reported that Bilawal and Zardari, who were initially supposed to be questioned separately, were made to sit in the same room on the directives of DG NAB Rawalpindi. At least 11 NAB officers questioned Bilawal about the Park Lane Estate Company, while the former president was questioned about Zardari Group as well. The statements of Bilawal and Zardari were also recorded. Upon arriving at the NAB headquarters, Asif Ali Zardari’s vehicle was allowed to enter the premises as he is a former president of the country, while Bilawal’s vehicle was stopped at the gate. NAB officials wanted Bilawal to walk inside but he refused to do so. Later, the PPP chairman’s vehicle was also allowed to enter the premises. Aseefa Bhutto Zardari accompanied her brother.