The possibility of a nuclear war between Pakistan and India was widely debated in the past few days. Let us take a look at the aftermath of such a misadventure. Nine sovereign nuclear states across the world share between them approximately 14,000 nuclear missiles. Three nuclear flash points exist in today’s era: America and North Korea, Russia and NATO, and Pakistan and India. The Line of Control (LOC) between Pakistan and India is the most volatile place in the world right now as both nuclear states stare at the dreary possibility of a nuclear clash.

A nuclear confrontation anywhere in the world would have similar effects: a smoky sky, long-term climatic effects, dead crops and starvation, radiation poisoning, skin cancer and genetically deformed births. Not to mention the countless casualties at the site of the nuclear explosion due to blast, heat, and fallout. 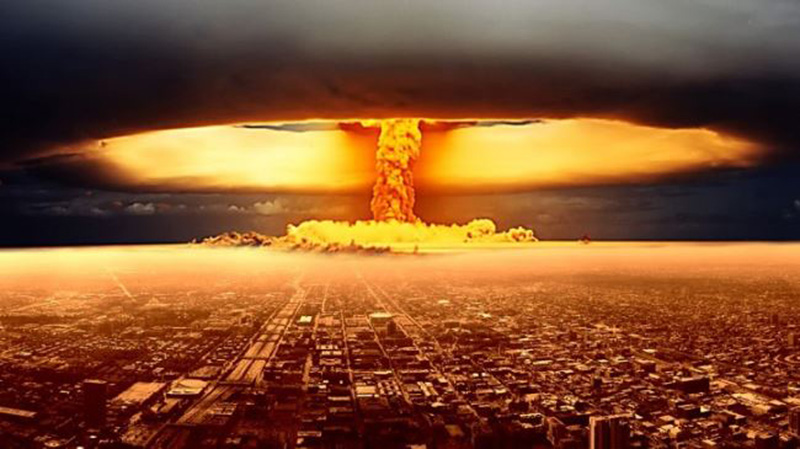 Brian Toon, Professor of Atmospheric and Oceanic Sciences at the University of Colorado, has studied nuclear warfare for almost 4 decades. He summarised the aftermath of a nuclear war in this era as ‘the end of the world.’Within days of an atomic blast, the resultant hot soot (black smoke produced by incomplete combustion of hydrocarbons) would rise some miles above the earth up to the stratosphere where it would envelop the earth. This soot sheath would prevent direct sunlight and heat from reaching the earth, dropping the earth’s temperature. This is described as ‘nuclear winter’ with ice age-like conditions.

Sunlight would be unavailable for plants to undergo photosynthesis – the process by which plants produce nutrients to survive and function normally. The immediate result would be dead crops and global starvation. Toon estimated that agricultural produce ceased following a nuclear clash would lead to worldwide starvation within 2 months. Exports would halt and millions would die as collateral damage. The ensuing smoke of a nuclear blast would create a near-global hole in the protective ozone layer triggering a global health crisis.

Consequently, ultraviolet (UV) radiations from the sun would reach the earth unopposed and age skin cells and destroy their DNA, increasing the risk of skin burns and skin cancer. The same UV rays would also cause of permanent blindness. Hibakusha is a Japanese origin word used for the unfortunate victims of the 1945 atomic bombings of Hiroshima and Nagasaki. 74 years into this tragedy, and babies are still being born with genetic deformities. A nuclear war in the South-Asia would be disastrous for generations to come. Bone marrow death – wherein red blood cell, white blood cell and platelet production decreases – is another deadly outcome of an atomic explosion. This increases the likelihood of infections and bleeding. Two of the world’s smallest nuclear powers and poorest countries, where majority live under the poverty line have egos the size of an ox. What Pakistan and India have achieved by decades of stubbornness and wars could easily rest on an eyelash.

The need of the hour is a pragmatic leadership on both side and not just an alpha-male who is solely focused on proving his masculinity by playing to the right-wing audience at home. There needs to be compassion, communication and transparency on both sides of the LoC. The real battle starts once the nuclear war ends. This battle is fought on multiple fronts to combat health, environmental, economic, political and infrastructural challenges. All possible strategies have been employed by Pakistan and India such as wars, oppression, proxies and baits. Peace needs to be given a chance.

The writer is a medical doctor based in Islamabad