Aurat March and the need for postcolonial feminism

A few months ago I had a social media debate with a woman on the limits of classical feminism as I advocated for a more nuanced approach considering the Pakistani society. Soon after, I was accused of being a mans plaining misogynist and blocked. We saw the same intolerance on a larger canvas after the Aurat March held on the 8th of March. The polarized debate has not so much been about the much needed Aurat March itself since it was conducted last year as well without the outcry it received this time. The problem is the inappropriate placards that have polarized our society further.

At the onset, let us agree there is excessive gender imbalance in our hyper masculine patriarchal society. Women face harassment on the roads, inequality in households and in their workplaces. Having established that, we can also agree sometimes the message has to be loud enough to be heard. But there is a fine line between the semantics of spreading a pertinent message, and further polarizing a society by generating unnecessary controversy.

The Aurat March has come a long way and has highlighted various issues of our sexist society such as marital rape, tax-free sanitary pads, forced marriages and trans rights. Thus, the basic premises of the Aurat March that pertained to reclaiming public places and highlighting issues stand its ground. 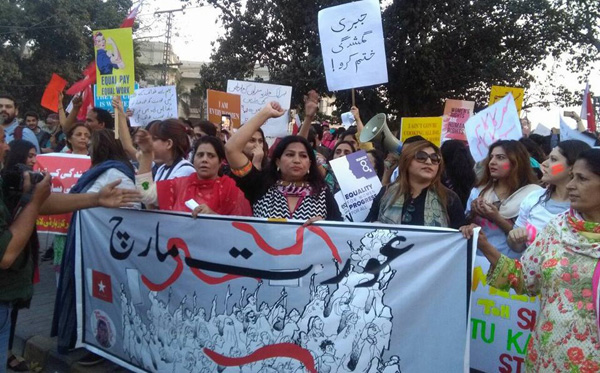 However, some at the March were seen holding contentious placards that some feminists have been supporting. I have no objection to them but believe this dilutes the original, genuine message of the Aurat March and the need for equality.

Let us argue why such placards were inappropriate.

Firstly, feminism finds its roots from the philosophical branch of morality. Basically, discriminating women based on their gender is morally wrong. How are such placards then morally right in a gathering also attended by young kids? Hypothetically speaking, how is a parent (irrespective of the gender) attending the march explain to a six year old what an ovary or dick is? Moreover, we should fear for the safety of women holding up those posters whose pictures have been plastered all over social media. We must not forget this is a hyper-masculine society that has perpetrated violence against women for far minor things. We can also debate whether there was adequate representation of issues faced by the most marginalized women of our society; the maids, bonded labour, farm workers etc.

I have genuinely taken a simplistic, binary approach to echo the arguments masses have made. Let us broaden the context moving forward and find a resolution.

Secondly, I understand semantics require context and the message to not share pictures of genitals and grow a pair has to be understood in the context and not be taken in a literal sense. The uproar on mainstream and social media against the placards has demonized the concept and need of feminism even further for the center and right, essentially strengthening their ignorant narrative.

How do we bridge this dichotomy for the need of equality and the demonized concept of feminism?

This can be done by simply getting rid of the Classical, Western feminism of the 70s and adopting a more nuanced, inclusive approach of Intersectional (also known as PostColonial) Feminism advocated by Kimberlé Crenshaw, a black feminist in 1989. Intersectional Feminism advocates exactly the message Aurat March originally intended – inclusivity.

To put simply, intersectional feminism does not consider gender alone to be the cause of the lack of equality. It also considers various other forms of social stratification such as age, class, culture and tradition when talking about equality. Thus intersectional feminism argues for a broader approach when addressing issues of inequality than Classical Feminism does and argues for the need to listen to different kinds of feminists – not just one type.

The concept of PostColonial feminism is especially important in development studies whilst dealing with women empowerment. A Mexican woman farmer who has 6 children will not face the same discrimination as Melena Trump would.

Intersectional Feminism can help in our case because it adopts a more inclusive approach. It is unnecessary to create the ‘shocker effect’ by using controversial, albeit sassy and courageous, placards since ensuring and the fight for equality is not a revolution but a process.

This process and our society’s general dislike for feminism can be bridged by using a more inclusive approach. Feminism needs the majority to help with the process but we will only increase the divide through such controversies.

Thus, a more intersectional approach is needed that considers Pakistan’s cultural, traditional and moral aspects. It will help us not only understand discrimination faced by women of different strata, but will also allow us to consider the traditional and cultural values of Pakistan during events demanding equality.A visual representation of this intersectional approach was the placard at the same march that said: