What the bipartisan attacks on Ilhan Omar tell us about the US?

On GOP day in West Virginia, Republicans from all over the state gathered to celebrate the grand old traditions of their party, namely, racism and Islamophobia. A poster linking Democratic congress woman Ilhan Omar to 9/11 was put up in West Virginia’s state legislature.It should come as no surprise; the Republicans have been playing this game for a while but the smears from fellow Democrats have pointed towards a larger issue.

Just last month, senior Democratic leadership condemned Ilhan Omar for correctly pointing out Israeli lobby’s role in Washington. She apologised for her language but refused to back down from the substance of her critique of Israel. She has supported the BDS (Boycott, Divestment and Sanctions) movement against Israel which has been subject of much criticism from conservative as well as liberal quarters within the United States. Twenty six states within the US have passed anti-BDS legislation. Texas, for example, has a law which requires government contractors to sign an oath that they will not boycott Israel. It seems the First amendment does not apply when it comes to criticism of Israel. Recently it was reported that France is passing a law which criminalises anti-Zionism which was previously distinct from anti-Semitism. 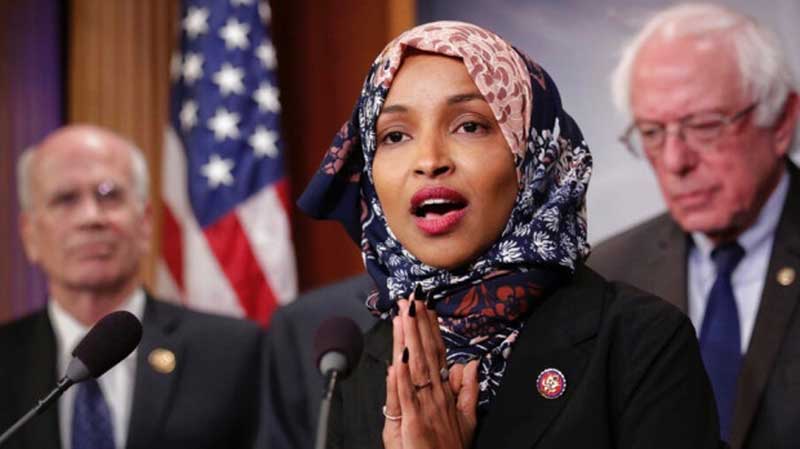 A question then arises: Why are liberals so against good faith criticism of Israel? Noted New York Times columnist and advocate for Israel, Thomas Friedman, in an interview with Al Jazeera stated that a candidate endorsed by AIPAC (American Israel Public Affairs Committee) could raise the money in three phone calls which another candidate would require fifty thousand phone calls to raise. In 1992, the then AIPAC president was caught on tape bragging about his influence over the departing presidency of George H. W. Bush, as well as the incoming presidency of Bill Clinton. As a former member of Zionist paramilitary and later peace activist, Uri Avnery said, if AIPAC “were to table a resolution abolishing the Ten Commandments, 80 senators and 300 congressmen would sign it at once”.

Let us not kid ourselves about what is going on here; a Black Muslim refugee woman who wears a headscarf had the temerity to criticise Israel and has been pilloried by the American establishment. It is not about anti-Semitism at all but about Islamophobia and racism. Critics of Ilhan have pointed to nefarious undertones in her comments about Israel, they have called on her to criticise Saudi Arabia which she has done on many occasions. One should ask them whether Ilhan Omar could put forward any criticism of Israel which would not be misconstrued by certain quarters as anti-Semitic. The answer is obviously no.

Nelson Mandela once said, “We know too well that our freedom is incomplete without the freedom of Palestinians”. He recognised Israel for what it was; A vestige of European imperialism in the world.

Franklin D. Roosevelt once said, “I ask you to judge me by the enemies I have made”. Ilhan’s notable critics include Brett Stephens, a New York Times columnist, who once referred “to the disease of the Arab mind” and Bari Weiss, another New York Times columnist who as a student at Columbia University organised to get pro-Palestinian professors fired from their jobs.

The criticism directed at Ilhan Omar is because her last name is Omar. She is a Muslim who has spoken out on the plight of fellow Muslims living under apartheid in Palestine.She questioned war criminal extraordinaire Elliot Abrams, now Trump’s envoy to Venezuela, on his complicity in the massacres in El Salvador and Nicaragua. She has refused to back regime change and questioned the intentions behind the US aid to Venezuela. Her courage in the face of vitriol directed towards her and her refusal to back down is an example in moral courage. And it is because of this refusal to fall in line with the established wisdom that she is being maligned. As Democratic congressman Juan Vargas put it “Questioning support for US-Israel relationship is unacceptable”.

So where is the moral outrage when an explicitly racist and Islamophobic poster is hung on the wall at a state legislature, andwhen her name appears on the hit list of Christopher Hasson, a Neo-Nazi serving as a lieutenant in the US coastguard? Nowhere to be seen. House Democrats are looking into passing a resolution condemning her for anti-Semitism. To borrow from Orwell, it seems some forms of prejudice are more acceptable than others.