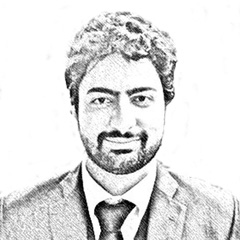 The judge in a democracy

For about two years some of the biggest policy decisions in our country were taken by one unelected man.

In theory, the adoption of a constitution limits the scope of a judge’s discretion. He can only act upon issues that are spelled out in the constitution’s text. That is after all, one of the purposes behind having a constitutional framework: no power should be unfettered. But that theory assumes that every institution will respect constitutional limitations. Under Saqib Nisar, the Constitution was whatever he wanted it to be. He sat smelting from it new interpretations that would allow the Supreme Court to become the executive and the legislator.

By all accounts it was never supposed to happen this way. As a junior judge of the Supreme Court, during the tenure of Iftikhar Chaudhry, Saqib Nisar bristled at the way the former Chief Justice used the Supreme Court’s suo motu power under Article 184 (3) of the Constitution to interfere in the domain of the executive. All the pundits predicted that once Saqib Nisar became Chief Justicec suo motu power would be confronted with massive curtailment.

Under Saqib Nisar, the suo motu power became a voracious beast whose hunger for making policy could not be satiated.

Our constitution guarantees the separation of powers, but that didn’t matter. There was no issue too complex for the CJP Saqib Nisar. He could fix hospitals, jails, schools and more by swooping down upon them and ordering immediate action. Anyone who questioned where he got the authority to do so was threatened with contempt or a good old berating that the media would eat up. At some point, he realised that the country was facing a water crisis, and so, we embarked on building a dam. A massive billion-rupee project was initiated without a single elected representative having a say in it.

No judge should wield this much power in a democracy.

Perhaps Saqib Nisar’s tenure is a good point of reflection for considering whether the post of CJP is too powerful? It certainly seems so if dissent by fellow judges, a hallmark of judicial independence, comes with harsh consequences. Justice Isa found out about this when he questioned during a case whether the Supreme Court had the power to interfere in issues that were purely policy-related. A swift recess followed the question and suddenly Justice Isa was no longer hearing the case.

In terms of legacy, perhaps nothing will be remembered with more bitterness than Saqib Nisar’s tendency to bully people in his courtroom

If anything, Saqib Nisar’s tenure was a victory for those who espouse the view that the ends justify the means. For those who believed in that, Saqib Nisar was a hero. But that belief is often based on the sort of binary thinking that is inclined towards populism. Populism is bad enough in politicians, it is cancerous for a judicial system. Populism necessitates looking at every issue with an ‘us’ versus ‘them’ mindset. It is the idea that society is divided into two factions that are in a constant state of war with each other: the ‘corrupt elite’ and the ‘pure people.’

Saqib Nisar thought he was part of the ‘pure people’ who would rid Pakistan of the ‘corrupt elite.’ No wonder he called owners of private schools ‘vultures’ before he had even heard the merits of their case. No wonder he demeaned a prominent Professor and Doctor in open court because he had a high salary. No wonder he asked for Indian content to be banned for no other reason than its supposed ‘corrupting’ influence.

In terms of legacy, perhaps nothing will be remembered with more bitterness than Saqib Nisar’s tendency to bully people in his courtroom. Members of Parliament, bureaucrats, lawyers, CEO’s of companies, no one was safe from the wrath of public humiliation. Reputations were ruined for reasons that often had nothing to do with the cases before the Chief. Proceedings in court room number one would often begin and end with little to no reference to the law for their entire duration. Instead, it would be a long and tortuous procession of people being humiliated.

A judge in a democracy should perform his duties with humility and respect, especially towards ordinary citizens. As Babar Sattar wrote recently, ‘pity the nation that acclaims the bully as a hero.’

Perhaps, just perhaps, all this criticism could be ignored if the CJP had spent time and effort fixing our decaying court system. Instead, the number of pending cases before the Supreme Court actually increased during his tenure. Not a single substantive reform of the judicial system was undertaken during his tenure. The only reforms that were done were cosmetic. Making no difference to the inordinate delay that plagues our courts.

Now we have a new CJP. His credentials are impeccable. However, perhaps it is time that both Parliament and the judiciary consider just how long they wish to live in a system in which the Supreme Court’s suo motu powers have no limits. Where the Constitution means whatever a Chief Justice wants. We can learn from Saqib Nisar. We can learn that we need to seriously reconsider the scope and powers that one unelected man can wield in Pakistan’s judicial system.

We need judges who respect democracy, not those who see it as an obstacle in the way of achieving their version of justice.

We need judges not kings.

The writer is a lawyer based in Lahore and also teaches at the Lahore University of Management Sciences. He holds an LL.M. from New York University where he was a Hauser Global Scholar.