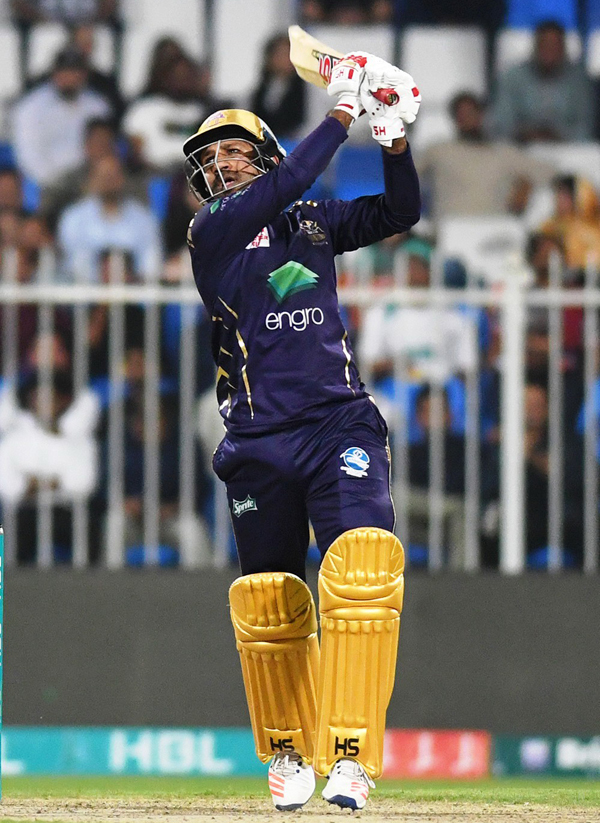 SHARJAH: Skipper Sarfraz Ahmed hit a last-ball sixer as Quetta Gladiators scored a three-wicket win over Lahore Qalandars in their Pakistan Super League match at Sharjah Stadium here on Saturday. Quetta, chasing 144 to win, needed three off the last ball from David Wiese and Sarfraz completed the task for Quetta’s fourth win in as many games to keep them on top of the six-team PSL table. With that six Sarfraz finished with 52 not out off 36 balls with a six and four boundaries.

Lahore found the going tough against an accurate Quetta bowling, riding on a laborious 40-ball 45 not out which were, uncharacteristically, without a six and had only two boundaries to post a modest 143-7 in their 20 overs after sent into bat. Quetta have now chased down targets successfully in all four matches, winning by six, seven, eight wickets in the previous matches. Quetta were in a spot of bother when they lost in-form Shane Watson off a third-ball duck and then the other two successful batsmen Rilee Rossouw (17) and Umar Akaml (nine departed soon to leave Quetta in a difficult situation at 3-53.

Ahsan Ali, who scored 29-ball 40 with two sixes and as many boundaries, fell to Sandeep Lamichanne and Dwayne Smith was run out for two, but the wily campaigner Sarfraz kept his nerves. Sarfraz and Mohammad Nawaz (18-ball 19 with a six) took Quetta to within nine runs of victory. Quetta needed seven off the last over which started with Wiese bowling Anwar Ali with a yorker. Sarfraz still knew a big hit could help Quetta cross the line and that he ultimately did.

Sarfraz praised opposition’s bowling. “When you chase you need to keep wickets in hand, but today we lost wickets regularly because Lahore bowled well. In the end it was my day and I hit the needed runs,”
said Sarfraz.

Lahore’s skipper Fakhar Zaman — leading the side after AB de Villiers hurt his back and couldn’t take the field – admitted his team was short on runs.

It was young Mudassar who was impressive with 3-21. He did not allow the great De Villiers to hit at his usual best. Mudassar kept following the great master as and when he moved in the crease, allowing him a leg-by and two singles in the 18th and just seven in the final over. Left-arm spinner Nawaz (1-35) removed Fakhar (three) in the second over. But Fakhar’s partner, Sohail Akhtar looked threatening as he smashed three sixes and a boundary in his 21-ball 29 but Mudassar got him caught behind to check the flow of runs. Corey Anderson, playing his first game this year, hit a six in his 18-ball 19 before David Wiese (16-ball 20 with a six) helped De Villiers add 40 for the fifth wicket. But Lahore did not manage to hit high and wide in final overs as just 28 in the final five overs. That was because Quetta unleashed tight bowling, with Sohail Tanvir also chipping in with 2-21 in his four overs.