* It is reported Sadequain breathed his last at 2am on February 10, all alone in his hospital room except for his full time attendant 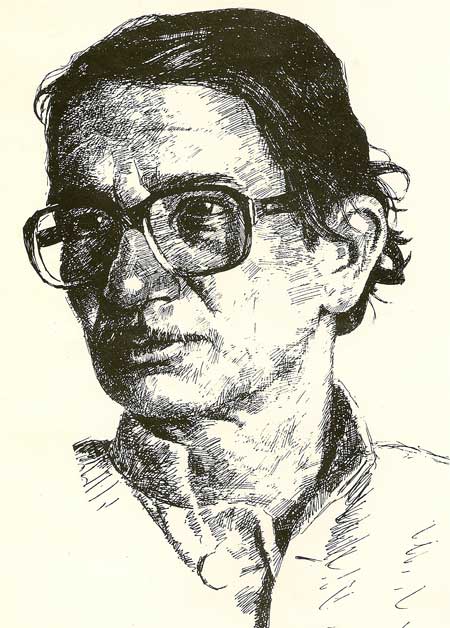 It seems like yesterday, but it was 32 years ago in February 1987 that Sadequain fell ill while residing in Frere Hall and painting on its ceiling the majestic mural Arz-o-Samawaat.

The old historic building had no insulation and Sadequain’s frail body was no match for the cold gusts of January. He contracted pneumonia and never recovered.

It is reported Sadequain breathed his last at 2am on February 10, all alone in his hospital room except for his full time attendant. In his eulogy, Dr Ajaz Anwar poignantly wrote, “Of late sad news has kept pouring in from Karachi; the latest was that of the death of Sadequain. Among the tributes showered from all sides, the earliest was from the one who drove away with scores of his paintings from Frere Hall.”

The robber was Sadequain’s attendant who after realising his passing away did not inform the doctors and instead rushed to Frere Hall, did his dirty deed, returned to the hospital and then only informed the doctors. This robbery was reported in newspapers but did not result in investigation.

If art measures the pulse of a nation then Sadequain had his fingers on this pulse and he recorded it for posterity. He was arguably an embodiment of the spirit of Picasso, grandeur of Michelangelo, poetic prowess of Omar Khayyam and calligraphic skills of Yaqoot. Sadequain was a polymath, the likes of which are a rarity.

Critically acclaimed on all five continents, artist and poet Sadequain is among only a handful of Pakistanis whose name and work should transcend through centuries, but he is awaiting his Theo who revived and immortalized his brother, Vincent Van Gogh’s name and work.

The length, breadth and depth of Sadequain’s canvas warrant climbing over a 50,000-feet high mountain to scan his prodigious palette in a meaningful manner. Anything less will not be sufficient to appreciate finer details and the far-reaching edges of his genius. The only muralist of significance of the region Sadequain would have been considered the greatest artist if he had done nothing but murals.

Most murals amounting to tens of millions of dollars were donations to the institutions. Sadequain did not sell his paintings, drawings and calligraphies. He simply gave them away for no reason, for most part to the undeserving. Same cannot be said about the undeserving beneficiaries, who have been cashing Sadequain’s blood, sweat and tears. 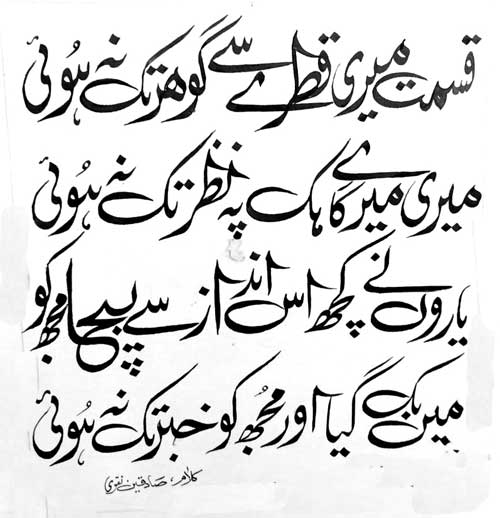 Sadequain prophesised the greed in his rubai:

Overseas, his murals and paintings are in the collection of New York Metropolitan Museum, Royal Ontario Museum in Toronto, Museum of Modern Art in Paris, and other venues. His murals are also on permanent display at the Aligarh Muslim University in India, Indian Institute of Islamic Research in Delhi, Ghalib Institute in Delhi, Banaras Hindu University in India, National Geophysical Research Institute in India, Abu Dhabi Power House, and the Pakistan High Commission in Canada, and other venues.

Most artworks amounting to tens of millions of dollars were donations to the institutions.

If art measures the pulse of a nation, then Sadequain had his fingers on this pulse and he recorded it for posterity. He was arguably an embodiment of the spirit of Picasso, grandeur of Michelangelo, poetic prowess of Omar Khayyam and calligraphic skills of Yaqoot

A bird’s eye view of Sadequain’s journey to stardom is full of events bordering on mind boggling improbable episodes. Why a 25 year old aspiring artist was invited for his first solo exhibition at the residence of HS Sohrawardi, Pakistan’s fifth prime minister? In 1960, Sadequain won All Pakistan National Exhibition Award at a time when Pakistan was home to the most talented cadre of artists.

In 1961, he painted four large murals at State Bank of Pakistan in Karachi when mural art was alien to the country. It is still a genre of art which has not seen any progress. In 1961 Sadequain won Biennale de Paris for his painting Last Supper. In 1964, Sadequain, who did not speak or read French language, was commissioned to interpret Nobel Laureate Albert Camus’s complex novel The Stranger. In September 1967, Sadequain completed the mural Saga of Labour measuring 170 x 26 feet at Mangla Dam in 70 days and 71 nights. Saga of Labour is one of the largest murals in the world. Sadequain experimented with Arabic calligraphy in 1968 and revived the long lost art of calligraphy by elevating it to modern art form. During the 1970s Sadequain painted and donated mural on the ceiling of Lahore Museum and eight calligraphic murals for Islamic Gallery in the Museum. From December 1981 to March 1983 Sadequain travelled to India and painted and donated several large murals and scores of artwork to Indian public and private sectors. His final artwork is the gigantic mural Arz-o-Samawaat on the ceiling of the Frere Hall.

Self proclaimed faqir, Sadequain was outside society’s worldly greed or hypocrisy and called himself “speaker of truth.” In an interview he said, “People ask why I don’t paint flowers, butterflies and landscapes? I tell them that I seek the truth and I am after reality. I am not inspired by someone posing against the backdrop of roses in a vase or pink curtains. What inspires me is a person who has gone hungry for hours and is struggling for survival. The expression that lights his face at the end of the day when he has finally found some scraps, that is what touches me. I am a painter of the expression of reality.”

If art imitates life, then its relationship with society defines the quintessential forms of human existence. It was these forms that Sadequain strived to explore, discover and define by contrasting the academic ideals versus implicit realities. In an attempt to delve and exploit the nature of true forms, he used the force of reason to define his extraordinary set of visual vocabulary and applied it to interpret the universal principles from his perspective. Anything that did not meet his standards of the principled universe, met his rejection. 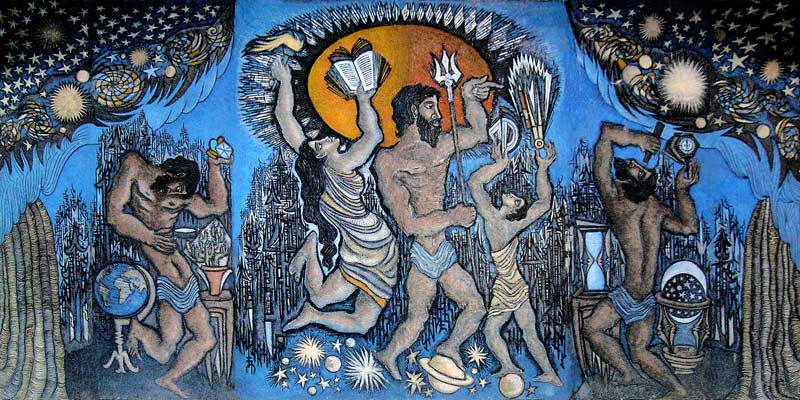 Sadequain was an innovator, a mirror to society, and a disrupter in the same vein as musician Ludwig von Beethoven is considered an innovator for the introduction of passionate romantic music, which was considered a radical departure from the established traditions of time. Writer Samuel Langhorne Clemens, known to the world as Mark Twain, created writings during the 1860s which were a mirror to society in his works such as The Adventures of Huckleberry Finn. Poet Percy Shelley defined a new genre of poetry, preaching “free love” in his works such as Ode on Indolence, Ode to a Nightingale and Ode on Melancholy.

Sadequain did not create ordinary and mundane. He was an innovator and his work is difficult to duplicate. He was far ahead of his time and it may take future generations to appreciate the relevance of his work. By distorting figures, structures and other surrounding elements on his canvas, Sadequain wanted to underscore his intended themes of deprivation, struggle, freedom or elation, and asserted them in a profound manner. The figures in Sadequain’s paintings were not portraits of specific individuals, but they represented the human race in general, its challenges and its opportunities. These characters were merely used to convey the story in which they played a necessary element to complete the narration. Their importance ends there, but their energy, posture, position and location underscore the theme of the composition.

The writer can be reached at sahmad1@san.rr.com