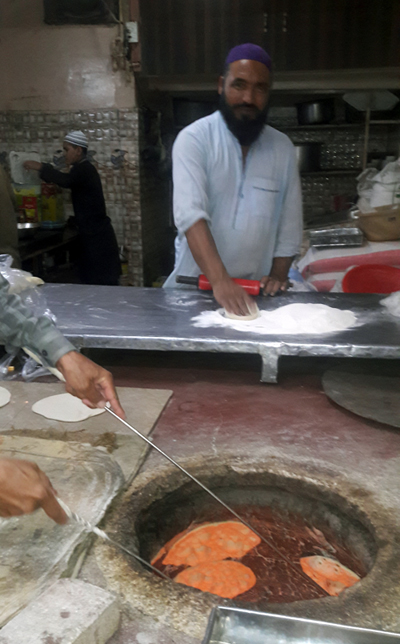 With the recent rains and intermittent overcast, when street food business experienced a relatively low customer turnout, tandoor owners in Karachi have seen a large number of customers pour past their shops. Tandoor owners have complete control over how they keep their business activity steady and normal in an ever increasing demand of naan roti.

This staple meal accompaniment is sold all year round in every adverse situation whether it is law and order or intense weather conditions. The typical Karachi character is a combination of people, lights and late night “eatout” in food streets.

It is the trendy street food concept that has kept the city vibrant while tandoor shops are considered one of the elements that complement the “dining out” flavour.

These outlets around the city are not just the seller of a main course of meal but are the source of ever growing “ready to eat” roti trend that serves thousands of households.

Karachi of course, has always had its own late-night naan-kababwalas. This delicious leavened bread is best served fresh off the tandoor. While it is traditionally made in a tandoor, it can be easily recreated in an oven or pan at home. But the easy availability of “ready to eat” naan saves women, irrespective of their financial status, from preparing roti in home kitchen during severe weather or fast and hasty lifestyle.

A piece of naan – the typical Pakistani flatbread – usually costs about Rs 10. Naan shops have a real hold on the people of Karachi.

These outlets around the city are not just sellers of a main course of meal but are the source of the ever growing ‘ready to eat’ roti trend that serves thousands of households. Karachi of course, has always had its own late-night naan-kababwalas

What makes tandoor shops remarkable among an array of dhabas and cafes around the city is the vast demand of naan roti – as the primary dish of everyday meal. People may purchase naan for a number of reasons, such as convenience, to get flavourful food for a reasonable price or to enhance the flavour of traditional dishes like nihari and paye.

Prior to last year’s increase in gas prices, a naan or tandoori roti was available for Rs 10 in different parts of Karachi. Tandoor owners have passed on the impact of rise in gas price as some of them may have reduced the weight instead of raising the price and still they are charging Rs 10 for a piece of naan.

In some parts of the city, a naan, or tandoori roti is being sold for Rs 12 as against the previous price of Rs 10.

These food outlets are cashing in on the “eat out” concept by charging Rs 20 for one naan. Although, their naans are made a bit thick and weighty, the price is double than that of tandoor shops.

Tandoor owners all around have two types of business arrangements. Some of them are running dhabas or roadside hotels and deal in full meal menu. While some of the tandoor owners run the setup separately and sell only naans as a supporting unit with hotels that deal with complete meal menu.

In return, the worker at tandoor shops who rolls out approximately 2,000 naans from two 80 kilogramme bag flour is paid a daily wage of Rs 900 – Rs 1,500, while the tandoor man who bakes naans also earns almost an equal amount of wage, which is Rs 900 – Rs 1,300. Besides these two skilled operators, tandoor shops have a team of workers who collect, count, wrap and give it to customers waiting for their turns to get naans of their orders.

Tandoori roti outlets in Karachi have turned into a major wage provider to a certain segment of people who have learned the skill precisely.

With an effectively cheap cost of capital and higher return, this business has the lowest risk of failure.

Selling tandoori naan culture acts as something of an equaliser, bringing together people from all walks of life as they brave the midday sun, winter chill and rains for the taste of hot naans. If tandoor shop experience evolves into a more formal restaurant practice, then these positive interactions will be lost forever.

The writer is a multimedia journalist. She can be reached at shaziatasneemf@yahoo.com and Tweets at @TasneemShazia