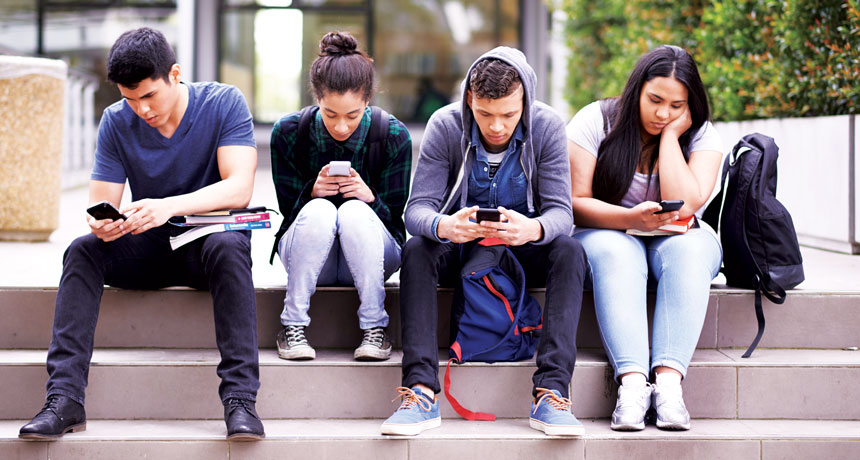 Human brain is the most astonishing and complicated thing controlling our lives every second.  We reached moon because of this amazing network of neuron. Human brain created wonders and distinguished us, the Homo sapiens, among the known species inhabiting this planet, and it can’t resist to check the notifications on Facebook or Instagram, on our smartphones. Let’s think about it. How long we can refrain from checking our phones to sneak into our social media accounts?

How smart phones affect us so deeply? Well, it’s obvious that it has the strong obvious ability to interfere with our daily life and physical tasks. Theoretically, smart phones create two forms of interruptions, extrinsic and intrinsic. Intrinsic interruption is dangerous because here mind is interrupted with individual’s own thoughts, while using smart phones, and generate unintended desire to keep interacting with cell phone. This “drifted attention” fetches an immediate gratification of something lacking in real life. This charming and appealing digital media is playing with the nerves of people. We should see that interactions on virtual space and staying online incessantly on cellphone is not something we ask for. It is something happening spontaneously, it is what new media technology wants us to do. It makes us “scatter-brained” and this is what individuals are hooked onto, always investing time and energy into devices. It seriously hampers our focus. Clearly this gives rise to diminished attention span as a result of increased contact with smart phones. It won’t be an exaggeration to say that focus is a lost art now. We are now checking our phone 150 times a day, or maybe more. We are literally walking into things because a phone screen is always distracting us from the real world.

Certainly, Smartphones have become a persistent inseparable part of our lives. They have the capacity to replace the various mental functions seamlessly. We know that smartphones are being upgraded day by day to perform the cognitive functions and bring satisfaction to humans. Likewise, there is another firm stance that, and many researchers actually said, smartphones make us fat and lazy which could be loosely translated as “stupid”.  Yes, we humans are hooked on to multiple things going on in a single moment, digitally. It has become an exciting activity to jump from app to app than to concentrate on a single thing out of the digital domain. In fact, the most personal, inevitable thing we have, is a smartphone.  An article titled “Are smartphones making us dumber” narrates a fact that they do not assist in our mental functions rather affect our abilities to think and pay attention. So, here we can make an assumption that smart phone is messing up our minds and taking over our faculties.Patricia Marks Greenfield, an American psychologist expressed her views that smartphones are “rewiring our brains”. Hence, the constant use of smartphones and its addictive technology we have started craving for immediate gratifications to satisfy our minds. If we dig deeper one may see the threats and fear behind this process. Corrupting our minds and making us vulnerable towards the technology. But, it’s not you. It’s your phone playing tricks on your mind. Award winning journalist, Catherine price wrote an impressive essay on “How to break up with your phone” and illustrated the point that virtual platforms created a want for something new every coming second. This phenomenon hijacks our attention. In one study, researchers revealed that the smart phones “notification” feature is the first thing which grabs people’s attention. The sound of notification is enough to distract an individual. Hence, it affects the focused attention and researcher signified that these notifications provoke unnecessary thoughts resulting in an inefficient performance (Stothart et al., 2015).

Younger generation feels socially dependent on their cell phones and any sort of dependence gives rise to anxiety. The real concern arises when minimal panic attacks after staying away from cell phones are overlooked because people have become less skeptical nowadays. They simple don’t think deeper or maybe they just don’t want to think. Anyway, this takes a lot away from us.

We as generations are moving towards the “Distracted future”, leading to insufficient skills for performance. In the coming years, this deterioration of attention span is increasing as we are becoming more dependent upon technology. Distraction has become a norm, we desire for it when it’s absent. That is why we constantly seek out for our phones. In one experiment in Chicago, 94% of the pedestrians couldn’t notice the money hanging from tress because they were using their phones while walking. In another survey, in japan Hokkaido University, it was observed that students seemed to work when their phones were in close proximity. According to American psychological Association, checking the phone continuously increases the anxiety in people, ending up affecting the whole personality and mind. We must sit back and think about it. Start a routine of staying away from social media on your smartphones. Do it when necessary. A lot of people spend too much time on smartphones just because it’s the nature of their work, but it’s not about that. It’s merely about staying away from unnecessary cell phone actions. Work on it before it consumes all of your attention. It’s important to examine your life and start giving your mind a rest. If you really want to better your mind and life, this is where you should take an action. The habit of checking phone every five minutes has become so prevalent. People check phones the moment they wake up in the middle of the night and this is the first thing they probably do after their every wake up. This may sound harmless, but it is seriously the other way around. Smart phones are in our hands all the times. We have become crucially insecure about our phones. Why is that? Maybe we all have answer to this.

We need a solution here, but solution is demanding. One thing which might work for us is to stop multitasking. Because we don’t think about the divided attention we always cop with.  We call it as our capability of performing more than two tasks simultaneously. We “proudly” call it multitasking. It probably feels good when you do multitasking but this slows down your brain. That’s how the probability of error increases. Researches reveal that a cell phone placed in your room is distracting enough even when you’re not using it. You must agree, a “silent” phone doesn’t do anything for us, even though we want to avoid the interference. We still keep using our phones. We need to design a routine for checking the important things in your phone and then stay away from the distraction, a phone may cause. It may be a hard thing to do, but it can get our focus back and save us from different personality disorders like anxiety. We can’t let the technology to rot our brains. We need a technology detox and stop using them as our pseudo gratification system for momentary desires. If we continue to distract our focus, we will never be able to face something bigger. We maybe need to learn to stay bored for a while and grab a book to test our patience because staying away from a smartphone is not apparently easy. We can’t let ourselves get desensitized by this technology. Try to live with technology, don’t let it overpower you.