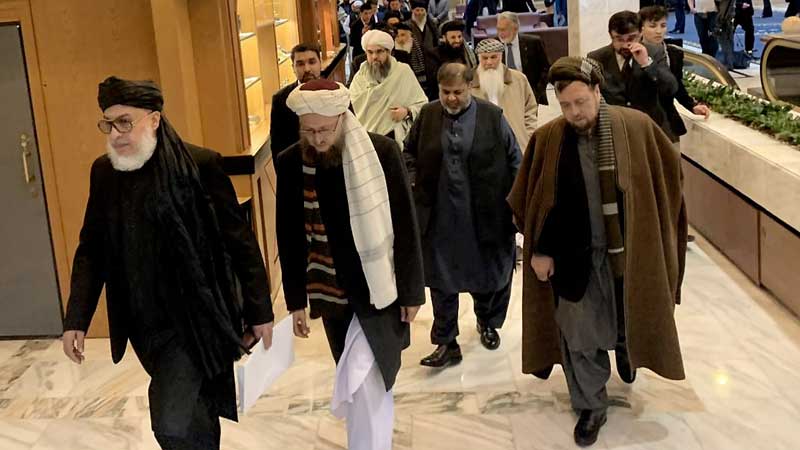 The Taliban demanded a new constitution for Afghanistan and promised an ‘inclusive Islamic system’ to govern the war-torn country at a rare gathering with senior Afghan politicians in Russia on Tuesday that excluded the Kabul government.

The Taliban’s manifesto, outlined in Moscow before some of Afghanistan’s most influential leaders, comes a week after the Taliban held unprecedented six-day talks with US negotiators in Doha about ending the 17-year war.

The Doha and Moscow discussions, though entirely separate, both excluded the government in Kabul, where President Ashraf Ghani is seen as increasingly sidelined from key negotiations for peace in his country.

The Moscow meeting – the Taliban’s most significant with Afghan politicians in recent memory – saw them praying together with sworn enemies including former president Hamid Karzai as they discussed their vision for the future.

“The Kabul government constitution is invalid. It has been imported from the West and is an obstacle to peace,” Sher Abbas Stanikzai, who headed the Taliban delegation, told attendees at a central Moscow hotel. “It is conflicted. We want an Islamic constitution,” he said, adding that the new charter would be drafted by Islamic scholars.

Taliban’s chief negotiator said they do not intend to monopolize power after an end to foreign invasion but want to establish an Afghan inclusive Islamic system with the consent of all Afghans. He said the Taliban and the US will form two joint committees to finalize drafts for the withdrawal of foreign troops and to prevent Afghanistan from being used against other countries. The committees will start work in the coming days, he said.

“It is responsibility of all the Afghans to end foreign invasion,” Stanekzai said, adding, “War has been imposed on the Afghan nation and the Islamic Emirate as their country has been invaded and the invaders have toppled an Islamic sovereign system. All causes for war should first be removed.”

A Taliban spokesman also released Pashto version of Stanekzai’s speech to the media.

Karzai and other Afghan leaders were confident that the Moscow siting will pave the way for start of an intra-Afghan dialogue.

A 10-member Taliban delegation is attending the conference which will continue also on Wednesday. Karzai’s list includes 38 delegates while several other prominent leaders are also among the participants.

Stanekzai called for some preliminary steps that he said are essential for peace and are parts of confidence building measures. He demanded removal of the UN Security Council’s sanctions list, arguing that peace negotiations and sanctions list are two contradictory concepts and can’t go side by side. “It is therefore required that these baseless sanctions and reward lists, which are used as a pressure tool for their interests, should be finished so that representatives of the Islamic Emirate are able to participate in peace talks in different places without any hurdle,” he said.

He called for the release of Taliban detainees and claimed that US and its protectorate regime have detained tens of thousands of Afghans and Taliban in their secret and open prisons. He also demanded formal opening of the Taliban political office, which was closed days after its opening in 2013 when former president Karzai raised objections. “Venue for negotiations and a communication site in the shape of an office is necessary for peace,” he said, adding at present the Taliban have no open and formal address as a venue for negotiations which is a preliminary requirement.

The Taliban leader also called for guarantors as he argued peace process needs guarantees, as without this, the provisions of the peace agreements could not be properly implemented. “Therefore, the United Nations, major powers, members of the Islamic Conference and facilitating countries must guarantee implementations of the agreements,” he said.

He also promised to stamp out Afghanistan’s poppy cultivation and take steps to prevent civilian casualties in a conflict that has killed and wounded hundreds of thousands.

Several delegates urged the Taliban to start talks with the Afghan government as intra-Afghan dialogue is the best option to end the conflict. Former president Hamid Karzai threw weight behind the ongoing talks between the Taliban and US envoy Zalmay Khalilzad. He said Afghanistan wants good relations with all countries but will not allow anyone to interfere in Afghan affairs.

Former vice president Yunus Qanooni told the conference that the current Islamic Republic system in Afghanistan is at the request of all Afghans and that it has been established on the back of sacrifices of millions of Afghans, according to Tolo News. He said the system in Afghanistan was established based on the will of the Afghan people and the constitution is one of the best in the region and that amendments to the constitution can be done only through legal channels.

Addressing the meeting, Hizb-e-Wahdat leader Mohammad Mohaqiq called on the Taliban to show ‘flexibility’ in holding face-to-face talks with Afghan government representatives, according to Afghan media.

Several delegates urged the Taliban to start talks with the government and also declare ceasefire in view of the peace talks in Qatar.

“I think all sides are ready for a compromise. It is a good start,” said Ghulam Jalal, the head of an Afghan diaspora group who hosted the meeting. Two women also attended the roundtable conference.

Frozen out for a second time, a furious Ghani, however, vowed he would not be an idle spectator as his country’s future was debated abroad. “Even if I have one drop of blood in my body, I am not going to surrender to a temporary peace deal,” he railed in a speech Sunday.

Amrullah Saleh, a Ghani ally, accused those Afghan leaders travelling to Moscow for the Taliban talks – including former president Hamid Karzai – of ‘begging to terrorists’. “A smile to the enemy is a blow to the national spirit,” Saleh said.

“We appreciate the efforts, but any peace talks about Afghanistan should be under the umbrella of the Afghan government,” Afghanistan’s de facto prime minister Abdullah Abdullah said after the Doha talks. The Taliban have always refused to break bread with Ghani and Kabul, who they view as US stooges. “The talks in Moscow would see an opening of channels to reaching an understanding with Afghan leaders outside government,” Taliban spokesman Zabihullah Mujahid said. Such a meeting between the Taliban and Afghan politicians – including Karzai, who was appointed by the US – is almost unheard of. Ghani’s rivals could see an opportunity in these various Taliban talks to undermine his leadership, analysts say, ahead of presidential elections slated for July. The Taliban outreach is also drawing a host of rival powers into its orbit, all keen that any finale to the war suits their strategic ambitions.