Being your own hero

* Amro's extensive family has lived in the village for ages. It is well known in the area because of his mother Meera's work with Success, which has riveted the local community 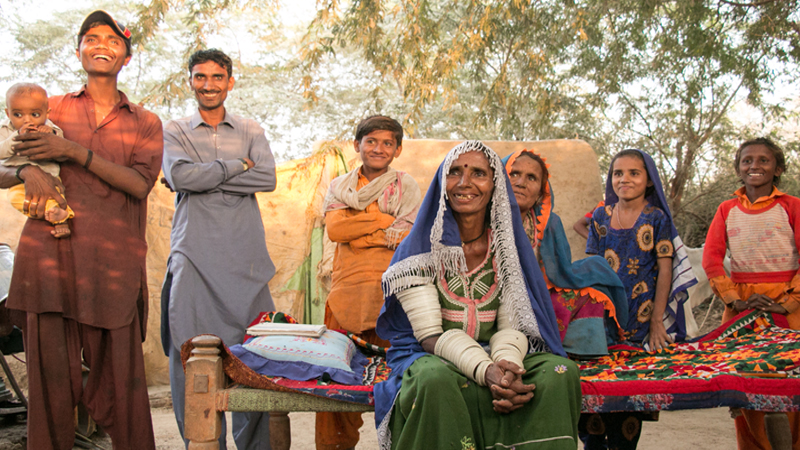 Amro is a shy, lanky 18-year-old boy who speaks softly and lives in Goth Rehmatullah Kashkheli, District Tando Allahyar, Sindh with his family. He exhibits an uncommon carefulness as he moves and great concentration as he works. The surgical precision of his work seems slightly at odds with his vocation: he is an apprentice motorbike mechanic. However, while his deliberate grace may seem alien to an outsider, it is absolutely in character for a young man who, seeing his mother’s hard work with Success, understood that heroes aren’t born, but are made with hard work, dedication and courage. Unlike many of his age fellows, he does not hunger after the fame of the matinee heroes whose faded posters hang in the workshop where he works. Instead, he chose to enrol in a mechanical training initiative under the Technical & Vocational Skills Training (TVST) component of European Union funded Success programme. His mother is Meera, who has seven daughters and six sons, including Amro. She is also the president of her village’s community organisation and a member of the local village organisation fostered by the National Rural Support Programme. When it was time to either enrol in the TVST initiative herself or nominate someone she was related to, it was Amro who volunteered his time and ambition to receive the training. He was already working at his present place of employment, but he felt he needed to do more to advance to the next level. “I knew the basics. Usually, it is all about practicing on customer motorbikes and learning by seeing what the senior and older mechanics are doing. But I didn’t feel like I was learning enough,” Amro says. “I am a patient person but I felt like the training would be a better use of my time.” Amro’s consideration of time falls in line with his educational ambitions as well. He has passed his matriculation and he aims to continue his studies. He believes that his work at the mechanical workshop, although unpaid during his apprenticeship, combined with his studies, is setting a good example for his younger siblings and nieces and nephews. “I work hard because I want the children to see that there is no shame in doing things with your hands. Many people taunted me that I will become a ‘sahib’ after studying. They make fun of me for the mechanic training and working at the workshop. But I feel like I am on the right path. There is a need for good mechanics here and apart from servicing the community, this is a sound business opportunity for the future, to have my own workshop,” he adds.

As we talk, the proof of Amro’s status as somewhat of a hero to the children in the neighbourhood is evident when many gather to hear him speak. They want to take photos with him. He shares his story with his youngest nephew gently cradled in his arms

He is presently saving money to raise an amount of Rs 18,000. He will buy a mechanic’s toolkit with it to start his own business operation once his apprenticeship ends.

Amro’s extensive family has lived in the village for ages. It is well known in the area because of his mother Meera’s work with Success, which has riveted the local community and has spurred women on to action and accountability. A farmer herself, she was married as soon as she hit puberty and does not even remember how old she was when she was sent off with her husband, who is also a farmer and a day labourer. Her family’s Poverty Score Card according to the initial household and livelihood survey by the Success team is 17. Before becoming a part of Success, she and her husband were barely making ends meet. Her children suffered from many ailments, she herself had troublesome pregnancies one after the other and there was no sound direction in which her life was going. However, after the intervention of Success, with projects about personal development, community infrastructural reforms, education, sanitation and water security, communal coordination and accountability of local authorities, she found herself to be hopeful and demanding of a better present and future for her children and those in the community. With Amro, she feels as if her hopes and dreams for drawing the children in her community away from disease, illiteracy, idle play and wasted potential are solidifying.

“We live such simple, cyclical lives,” she says with wistfulness. “A hari’s son will always be a hari. A day labourer’s son will always be a day labourer. It used to feel like we are just born to pass down our toil to our children and then die. Now I feel like no, there can be change. Amro’s commitment to his education and his work pleases me. He has so many other children and boys looking up to him. They also want to work hard like him.”

As we talk, the proof of Amro’s status as somewhat of a hero to the children in the neighbourhood is made evident when many gather to hear him speak. They want to take photos with him. He shares his story with his youngest nephew gently cradled in his arms. He tries to not get any oil and tar stains from the workshop on the baby’s face. When this is noticed, many members of his family laugh and say that Amro is a deft hand at handling babies. He can calm them when sometimes their mothers even cannot. This, Amro’s father says, has shamed many grown men into being considerate of their own children, where previously they did not pay much attention to them. No one needs to state the obvious: in patriarchal and capitalistic societies, young men like Amro are a beacon of hope and a symbol of a quiet revolution.

Amro is one of the millions of young people in Pakistan who are to be the future of the country. With a clear mind, positivity and help from Success, he has charted a course for himself that makes use of the best of his abilities, pairing them with sound technical training.