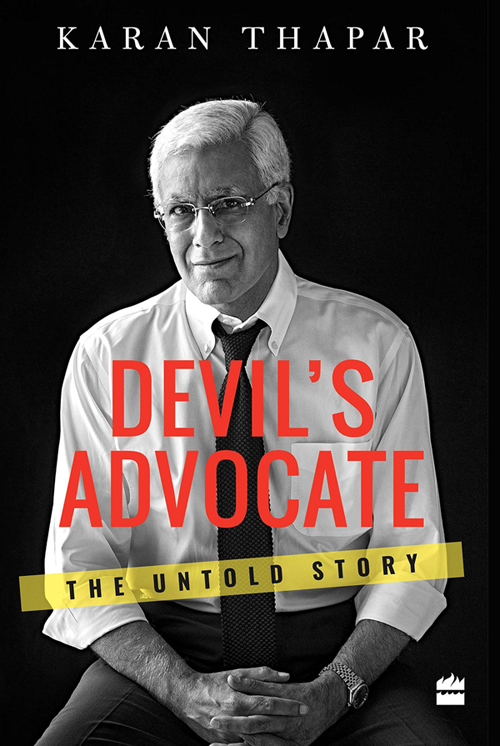 Erudite and highly composed, veteran journalist and celebrated television anchor, Karan Thapar is a household name in India because of his combative interviews.

Karan Thapar’s illustriousness is not restricted only to India where he is settled after the demise of his wife Nisha. Karan, son of the former Indian army chief and an alumnus of Oxbridge has conducted hundreds of interviews of celebrities, renowned civil servants, ace politicians and top most businessmen. Karan had started his career as a correspondent for The Times for Africa before moving to New Delhi where he now owns Infotainment TV.

Karan’s recent book Devil’s Advocate weaves anecdotes related with his childhood, his parents, peers, schooling and studies in India, Afghanistan and the United Kingdom. He joined The Times during his DPhil, still incomplete and will never be in his estimates. Karan has depended mostly on his memory whom he adores dependable and fresh and the notes he has been keeping since decades.

There are some exciting and thrilling episodes of his biography that entail into his long association with Benazir, his scuffles with certain politicians because of the uncomfortable questions he asked and now Karan is in the state of constant denial by Bharatiya Jannata Party (BJP) and Narendra Modi since 2007. The three-minute interview of Modi made him furious, sweating and perplexed as he opted a sudden walk out.

There are some exciting and thrilling episodes of his biography that entail into his long association with Benazir, his scuffles with certain politicians because of the uncomfortable questions he asked and now Karan is in the state of constant denial by BJP and Narendra Modi since 2007

Nonetheless there are certain missing links in Karan’s narration. He has not shared why he missed other important politicians of India and Pakistan like Nawaz Shairf a thrice prime minister of Pakistan, Manmohan Singh who ruled for 10 consecutive years, IK Gujral, Sonia Gandhi, Ghulam Ishaq Khan, the once too dominant figure of his times and who can ignore the one and only General Ziaul Haq. Karan has also more than one enigmas in his narrative. His way of describing Benazir’s student life, her association with him and then with his family when he married Nisha, Asif Zardari’s liberty with jokes and Karan’s own days and nights with his fiancée; such steamy disclosures make him a part time if not a fulltime disciple of Khushwant Singh. One can surmise that such candid explanations of private matters is comparable with Khushwant’s brusqueness. Karan’s intimate friends may have extracted more nasty details after going through his book. After all, Karan himself has broached such masked topics of his personal life.

Karan says that he dictated the book to his secretary and the book was ready in just five months mostly hinged on his memory and notes. But it generates problems. Neither Karan nor his reviewers ever bothered to check the glaring mistakes. Pervez Musharraf’s coup timing is one of them. Karan wrote, “The Musharraf interview happened just four months after the coup of 1997 when the general dismissed Nawaz’s government and took charge himself.”

Karan should replace seven with nine in the next edition. One wonders how eagle-eyed and sharp witted Karan is incorrect on history. Karan has thanked Santosh Kumar, Krishna Chopra, Amrita Mukherji, Bonita Vaz-Shimray, Rohit Chawla and Aman Arora for their diligence to review the draft. In different capacities they were part of the team. None could point out such erroneous account(s). One explanation is it often happens that mostly Indian friends take for granted any folly associated with Pakistan. Karan did the same. He is like Tim Sebastian of the British Broadcasting Corporation (BBC), always well prepared, ready to take risks, eager to establish acrimony, willing to ask unbearable questions like he did with Amitabh Bachchan, J Jayalalithaa, Modi and Musharraf. Like BBC’s ‘Hard Talk’, we have had a similar programme ‘Jawab Deh’ (Answerable) in the near past. It was a very successfully run by Iftikhar Ahmad before its unceremonious closure. Karan could not bring back Modi when he abruptly cut off the mic just after three minutes but Ahmad brought Benazir back when she created a similar scene in the beginning of the interview at her Dubai home. Ahmad kept on grilling her on the killing of her brother Murtaza and follow up issues when Benazir was the PM of Pakistan herself.

With congesting voice and teary eyes, she pulled off the mic and walked out saying, “My brother was killed not yours.”

The author appears erratically choosy in narrating his personal life. There are also at times too many details over certain matters like Sanjay Gandhi’s affairs. Readers may be curious if he had mentioned more on his life after the early death of his wife. The book also misses anything about his children when he is more than 63 years old. Karan has missed all characters associated with high-pitched track two diplomacy of Musharraf-Vajpai times. The interlocutors – Barjish Mishra and Niaz A Naek find no place in the book. Karan has not diagnosed as why the Agra Summit 2001 talks ended in nervousness and made no headway. Karan only mentions Musharraf visit casually. It was expected from him to find truth and to examine who actually scuttled the talks. Why Musharraf-Vajpayee agreed only on a sheer deadlock?

Karan, for your interest and information, be mindful that Vajpayee did not write himself on the visitors’ book. Recently, I was confided in by the then district administration officer who administered the ceremony at Minar-i-Pakistan.

“The foreign service officer got registration from me. He wrote almost one page on behalf of Vajpayee. Later, Vajpayee scribbled his signature with shivering hands under the paragraphs and moved his pen on each line written already, feigning he was writing himself.” Vajpayee was lucky. Social media was not invented by that time otherwise at home he must have faced great embarrassment. Karan, verify again whether Advani wrote himself or through his help. You have reproduced what LK Advani wrote on Quaid-i-Azam Muhammad Ali Jinnah during his visit to his mausoleum, “There are many people who leave an inerasable stamp on history. But there are few who actually create history. Muhammad Ali Jinnah was one such rare individual.”

Advani chose words like Stanley Wolpert did in the praise of Jinnah. Many paradoxes have been stirred by this book and one of them is when Jaswant Singh praised Jinnah, he was shown to the door by Advani and his BJP. Jaswant wrote more and more cathartic episodes in his follow up book India at Risk to the extent, “It is sad and instructive reflection, that in more than 66 years of independent existence, there have been almost the same number of internal and external conflicts or grave incidents of violent nature.”

Karan, in your book you should have highlighted your interview of former Indian foreign secretary Shyam Saran who has always maintained a realistic yet reconciliatory approach towards Pakistan. You missed to highlight what he reiterated very candidly and admitted the resilience and vision of Pakistan’s successive leadership. In his book How India Sees the World, Shyam Saran acknowledges, “Pakistan is often described as being suicidal. But its record shows that its ruling elite has displayed a remarkable ability to cut deals to ensure its survival and maintain its privileges. We are, in fact, dealing with a state that is coldly calculating in pursuing its declared interests.”

Karan must have been further curious to examine that Pakistan and India had almost agreed to settle Sir Creek and Siachin disputes amicably during Musharraf’s era. Saran derides Indian government over its inability to sign both agreements. Sadly, Saran’s book is not flawless too. It has grammatical, factual mistakes, even if contextual disagreements are kept aside. It may be reviewed separately.

Despite some left agenda and factual mistakes, Karan’s unjustified emphasis on certain points and simultaneously skipping some details on other vital topics, the book is immensely interesting and adorably anecdotal of the events full of life. Full of suspense, deeply reflective, cleverly crafted agenda setting and adored with impeccable expression make this book very informative to the readers enthusiastically interested in South Asian politics. I’m sure Devil’s Advocate revised edition will pay sufficient attention to these points left or ignored outright. Author may have received many other feedbacks from other reviewers. I’m sure Karan will do justice with each voice eulogising or criticising the book. I am still hopeful that by next edition, author’s personal relationship with Modi will be restored and he may have more interviews of him. The expected details may be stormier if not crispy. After all, Modi had pledged before walking out “Apni dosti bani rahe, Dekho mein dostana sambhand banana chahta hu” (let our friendship be maintained. I want to build a friendly relation with you).

Karan’s prospective invading questions on Modi’s surgical strike version may be explosive. Fiction may not be translated into a proven fact, there is possibility of another walk out and this time may be for good. Indeed, Devil’s Advocate is a first rated book by a celebrated media man who has convincingly established his position in India and abroad. The narrative is gripping, engrossing and even captivating yet slightly aberrant. Surely a leisurely must read however a meticulous and balanced revision will make it a household item in India and beyond. Good luck Karan for your future advocacies for the devils.

The writer is an alumnus of Potsdam Centre for Public Management, Germany and of Geneva Centre for Security Policy, Switzerland. He can be reached by mzafarhaider195@gmail.com