Sheikh Abdullah in his own words

* Nyla Ali Khan's book could be an auspicious starting point for anyone in Pakistan to finally sit down with the book and really get to know Abdullah as a living, breathing, historical figure 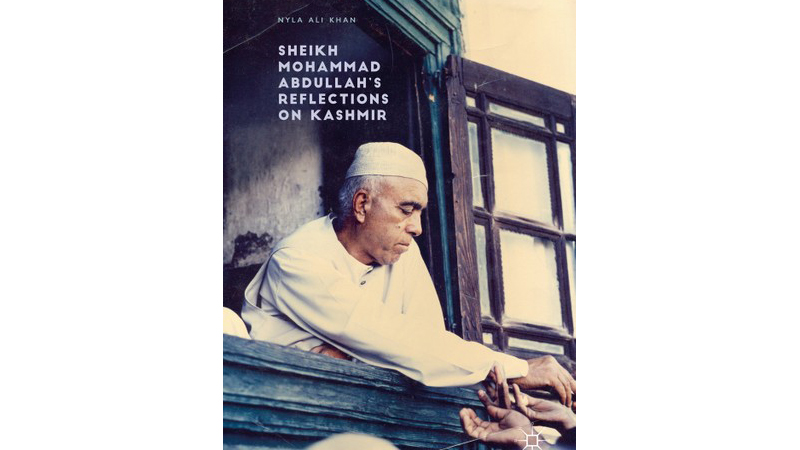 To most Pakistani readers, the figure of Sheikh Abdullah, even when they have not read anything about him, is often, at best, a problematic figure and, at worst, a traitor.

Traitor to what cause? No one knows or seems to care. Certainly, if a large segment of Kashmiris, at least on the other side of the line of control elected him to the positions of leadership does not figure very prominently in the Pakistani imagination.

Thus, while those Kashmiris who spew the Pakistani policy lines and declare “Jihad” on India are celebrated as a heroes in Pakistan, Sheikh Abdullah stays shrouded in this phantasmagoricmist, a shadow figure, a collaborator, a betrayer of trust and certainly not what other Kashmiris often called him and still remember him by The Lion of Kashmir.

Within this preconfigured field of national imagination, Nyla Ali Khan’s book, a book that recuperates and recovers words of Abdullah himself could be an auspicious starting point for anyone in Pakistan to finally sit down with the book and really get to know Abdullah as a living breathing historical figure, a figure who led his people through perilous times and whose loyalty and love for Kashmir cannot be historically denied. And if such Pakistani readers were to read this book, maybe this knowledge, this loving engagement with this much maligned and misunderstood figure of history would enable them to imagine not only Abdullah but also Kashmir and its past, present and future differently.

For Nyla Ali Khan, this is neither a hagiographic project nor a personal homage to her late grandfather; it is rather a work of incisive research and meticulous inquiry that recovers Abdullah’s own words, speeches, interviews, and letters and offers it to the readers. In a way, then, this is a work in which Abdullah is neither spoken for nor spoken about: he speaks for himself from the other side of death to point to the living words, often forgotten, he left behind, words that still bear witness to his vision, his struggles, his triumphs and errors and most importantly, his love for Kashmir and Kashmiris.

Most importantly, as the title suggests, this is not Abdullah talking about himself, it is rather Abdullah’s reflections on Kashmir, the place of his love and the space of his lifetime of struggles but also the very place without which it would not be possible to remember someone named Abdullah, for the history of post partition Kashmir cannot really be inscribed without an Abdullah in it! In fact, the rise of Kashmiri Muslim political consciousness preceded the partition and can be directly attributed to Abdullah and his associates in struggle. For it was Abdullah and other young activists for Muslim rights under the Dogra regime, as Nyla aptly points out, who formed “Fateh Kadal Reading Room Party.”

And “wrote articles for various publications in which they expressed resentment against the arbitrary and discriminatory practices of the monarchical regime.”

Thus, in a way, Abdullah literally inscribes himself in history at the very incipient moment when the Muslim Kashmiris under Dogra rule begin to articulate their concerns and ask for their rightful place as the majority population of the princely state.

One would also learn, if one were to take the time to read the book, that out of the two competing forces for political claims on the support and solidarity of the Kashmiris, while Abdullah emerged as the prominent voice in the Kashmiri public sphere, his opponent Yousaf Shah received “a stipend of Rs 600 from the Dogra regime” and he receded to the dustbin of history, while Abdullah, because of his strident and forceful advocacy for the rights of Kashmiri Muslims, emerged as the most prominent political voice of the Kashmiri Muslims. To most Pakistani readers, Abdullah’s ultimate challenge to the office of Mirwaiz of Kashmir, an office that supported the Maharaja, would be absolutely new, as the Pakistani public narrative about Abdullah is informed within the simplistic post-partition India-Pakistan dichotomy, and in this faulty narrative the crucial role of Abdullah in defining, perpetuating and popularising the very idea of Kashmiri Muslim political identity is either erased or silenced, for this erasure then makes it possible to posit the Sheikh as a traitor to the cause of Kashmir in the Pakistani political imagination.

It is impossible to cover the general significance of the book and its particular content in one brief review, so I will dwell a little on its content. The book is divided into three main categories of Abdullah’s voice about Kashmir: Letters, Speeches, and the Press Coverage of his life. While the letters offer what Abdullah longed for and what he lobbied for on behalf of Kashmir, the speeches offer us a glimpse into the rhetorical strategies, political claims, and declarations made by him to various constituencies. One important thread runs through all these archival materials: his love for Kashmir and its people! I offer some sample insights from different sections to prove my point, but I do hope that anyone interested in Kashmir and Abdullah’s role in its history would read the entire book more carefully.

While in third year of his incarceration, Abdullah wrote to the United Nations Security Council, one of many included in the book all advocating for the future of Kashmir. In this letter, Abdullah lays bare the hypocrisy of Indian government’s claims about the state of affairs in Kashmir:

In March 1956, the prime minister of India made a public declaration ruling out plebiscite in Kashmir.

Reasons advanced for this face volte are that Pakistan has joined SEATO, received Arms Aid from America and signed the Baghdad Pact. The absurdity of the argument is patent. Whatever Pakistan may do or might have done, that can be no valid reason for denying the Kashmiris the exercise of their right of self-determination in order to shape their own future. Secondly India’s Prime Minister has hinted that a vote in favour of Pakistan will rouse communal passions in India and endanger the security of its Muslim minority. This argument is also untenable. Is India’s secularism so skin deep that it will collapse like a pack of cards as soon as Kashmiris exercise their right of self-determination. One may as well ask: Are Kashmiris to be held as hostages for fair treatment of Muslim minority under the so-called Secular Democracy of India. Were India’s oft repeated promises to the people of Kashmir that they alone shall have the right to decide their own future through an impartial and fair plebiscite intended to be implemented only in case a vote in her favour was certain?

Note that every single word in the passage above is mobilised for the advocacy of Kashmir and the full letter is a testament to Sheikh Abdullah’s commitment to the cause of Kashmir and Kashmiris. Note also that he does not ask for Kashmir to be a part of Pakistan, something that we Pakistanis assume to be a natural position on Kashmir, but rather focuses on the Kashmir’s right to self-determination!

Similarly, in a speech to the people after his release from jail, he has the following to say:

India, Pakistan, and Kashmir should sit together to solve the Kashmir problem, because it can never be solved by resorting to war. If Pakistan ever thought it could destroy India by war, it has surely given up such ideas now. Similarly, if India thinks it can annihilate Pakistan, it is equally foolish. The results of war are so obvious and fresh in our minds.

However, at the end of this speech he also says something that, I am sure, would be pretty galling for most Pakistani readers:

I am addressing you as a free man after years of detention. Since all restrictions have been removed from me, I can appeal to my brothers to work hard for the prosperity of their own country. They should love India as their motherland, as they have been born and brought up here. Let us hope that there will never again be war between India and Pakistan for it will be disastrous for the minorities of both countries.

That Sheikh Abdullah sees himself as a citizen of India, of course, should be a no brainer, for his fight, all his life, had not been about whether Kashmir becomes a part of India or Pakistan, but rather that the people of Kashmir should have the right to determine their own future and that within the political system of India, unless the plebiscite is held, they should be able to live with the dignity of free people with equal access, as full citizens, to participate within the national and regional political and social life of India. Expecting Abdullah to be the leader of Kashmiris but a spokesperson of Pakistan, as most Pakistanis did and still do, is not only delusional but would have been an absolutely impossible position for him to take, especially if he was and I believe he was, genuinely interested in safeguarding and protecting the rights of Kashmiris within the Indian political system.