Why you need the Revolution

But the system will not change the course of its evolution, for the good reason that it does not evolve anymore; it is organized only for the purpose of simply lasting another moment, of surviving. Far from pretending to resolve its own contradictions, which are nonetheless insoluble, it seems increasingly ready to impose itself by force, thanks to a regulation that is more meticulous and narrower than the particular activities, made in the name of a kind of democratic form of dictatorship. Every day in fact the ideological period has long since surpassed, in New York as in London. We see the British Imperial Democracy, the American Plutocratic Democracy marching hand in hand with the Marxist empire of the Soviet Dominions, certainly pursuing the same final purpose, whatever the cost, having the air to fight it, the system within the which all they have acquired wealth and power. Because, after all, Russia plays the classic role of parliamentary opposition in the capitalist system.”

Who is the author of the above step? Perhaps a philosopher defender of Gillets Jaunes, a contemporary who lived the Paris events of 24 November? No, and the mention of the Soviet Union will have put you on notice. This is Georges Bernanos (1888-1948), and wrote these lines at the beginning of 1945. The Allies have just won, and he, the anti-Fascist of the Spanish Civil War, who also joined De Gaulle’s liberation organization, travels around Europe to warn, in heated conferences, on the dangers of the post-Yalta world and on technological progress and unbridled capitalism – in a rapid pamphlet of which we can hardly today, immersed and slaves of digitization, intelligence artificial and virtual reality (or augmented), appreciate the prophetic value: “France against the Robots”.

In the days of the totally unexpected uprising of the Peripheral France, it seemed useful to me to resume these lines. Bernanos is the Catholic writer, author of the famous Diary of a country curate. It is interesting to see how he speaks of the Revolution as an absolute, almost sacred. For us Italian Catholics, the Jacobin Revolution was an anti-Christian aberration and totalitarian terror; Bernanos knows this very well, he is also the author of the Carmelite Dialogue, in which he recalls the true story of the guillotined Carmelites of Compiègne on 17 July 1794, making of it a drama of fear, of grace and of accepted martyrdom. But as French, however, he recognizes the Revolution as extreme “sacred” political necessity, when the existing order has lost all legitimacy, it is anti-human and makes you as slaves. 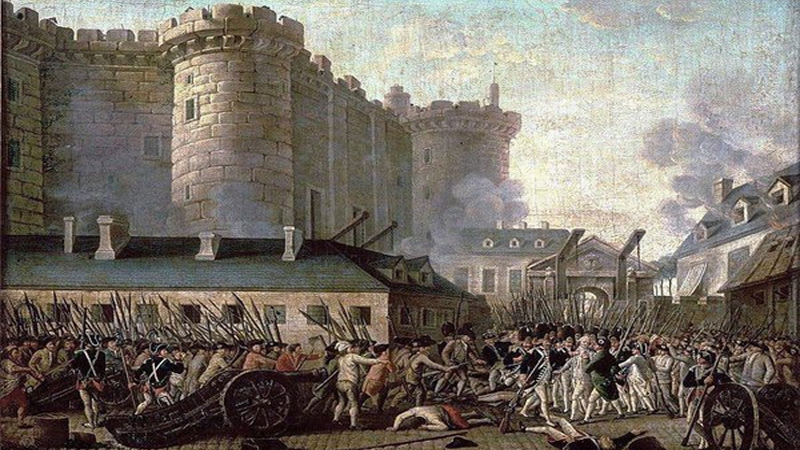 If he saw what the System against which he invoked the Revolution became today, Bernanos would have little to change. To replace “Soviet Union” with the capitalist-communist China, which is not an alternative but a “parliamentary opposition” in the globalist system; and even better, with Saudi Arabia, this clot of obscurantist wickedness, despotic barbarity, hypocritical vices and unearned billions that is the most important ally of the West. It would denounce the sales of French weapons (174 new export licenses worth billions of euros, “bombs, mines, rockets, missiles, explosive devices”) in the perfect knowledge that the monstrous Wahabi kingdom uses them to exterminate the population of Yemen.

Yemen where impoverished parents sell little girls to Arab husbands: “like Nojud, forcibly married by her father at the age of 10. In spite of the promise not to touch her until the first menstrual cycle, the husband has repeatedly abused her. For two months Nojud cried every night in the indifference of the acquired family and the violence of the “groom” irritated by her rejections”. According to the Nada foundation, which fights very early marriages, more than 250 girls in Yemen were forcibly married in 2017, often after the loss of their parents. In the same year, 120 children were hospitalized in the first week of marriage, 12 did not survive their wedding night, six committed suicide; others died from complications due to early pregnancy.

Only the Dictatorship of Money can explain this horrible incest among the “advanced” West (which affirms and promotes all the ever new “rights”) with the most odious slavery, with such Arab bestiality, that the whole West accepts because it can to pay. Where the most aberrant aspect is the Western “good conscience” – the one that for example had Heiko Maas, the German foreign minister, write that the EU, now that the US has become barbarians under Trump, “must become the cornerstone of the international order” because “compromise and balance are in its DNA, […] Europe rests on the rule of law, on respect for the weakest and our experience that international cooperation is not a zero sum game.”

Thus, with perfect hypocritical conscience, after having reduced the Greek people to despair and destruction, Maas is sure that he is not the same and worse brutal than Trump’s America and that the EU is a model of unattainable civilization as “association of States convinced of the advantages of multilateralism, which believe in international cooperation and the rule of law”. Bernanos could not yet know this EU. Yet he describes it perfectly in that entity “which does not evolve anymore; it is organized only for the purpose of simply lasting again, of surviving. Far from pretending to resolve its own contradictions, which are nonetheless insoluble, it is more and more ready to impose itself by force, thanks to a more meticulous and narrower regulation of particular activities, made in the name of a sort of democratic form of dictatorship”.

Democracy, this? Let’s give the final word to Bernanos:

“I do not care to scandalize the weak spirits who oppose to reality words already dangerously emptied of substance, like “Democracy”. What do I care? If you are too coward to look at this world to see it as it is, turn your eyes away, stretch your hands to its chains. […] But do not commit the infamy of prostituting the word revolution, this religious word, this sacred word, dripping through the centuries of the blood of men. Especially not prostitutes the word “progress”. Never a system has been more closed than this, it has offered less prospects of transformation, of change. This world is founded on a particular conception of man, common to the English economists of the eighteenth century as to Marx or Lenin. Sometimes it has been said that man is a religious animal. The global system has defined it once and for all as an economic animal: not only the slave, but the object, the almost inert, irresponsible material of economic determinism – and without the hope of freeing it, since it has no other reason than interest, profit. Bolted in itself by egoism, individual no longer appears except as a negligible quantity, subject to the logic of large numbers; we do not pretend to use him except as mass, based on the knowledge of the laws that govern the masses. So that progress is no longer in man, it is in technique, in the improvement of methods capable of allowing the ever more effective use of human material.”