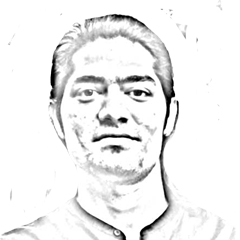 For him, MQM was not just an ordinary party: it was a romance that shaped and influenced his politics and identity

If you are a Pakistani twitter user, you must have come across a highly opinionated twitter handle called @abidifactor. Syed Ali Raza Abidi, who has died aged 46, was a seasoned MQM worker who was the face of the party in a time where association with the Tehreek meant to invite either humiliation or victimisation. Despite knowing the risk, Abidi bhai had always remained a steadfast defender of his beleaguered party.

And the reason was quite simple. For him, MQM was not just an ordinary party: it was a romance that shaped and influenced his politics and identity. It’s true that MQM-B was able to expel Abidi from the party, but they couldn’t remove MQM from him.

He firmly believed hopelessness could not revive MQM. In the post-22nd August speech when MQM-P leadership was heavily being criticised by the ideological party workers, he confronted and asked them for suggestions. But he categorically asserted that abandoning MQM is not a solution. In fact, it will extirpate the party from the city’s politics.

Many would also agree that Abidi became a brand in the post-Altaf MQM. His popularity graph was rapidly increasing within and outside the party. He was everywhere, talkshows, social media, constituencies, motivational sessions, civic campaigns, and you name any other activity in Karachi.He was an emerging icon of the city.

Abidi was one of very few people who understood the city’s politics in general and psyche of the voters in particular.In 2015 when Sindh Rangers started cracking down on MQM workers and units, when asked how will MQM manage to pull out seats if its offices and elections activities remain under strict scrutiny? He said, ‘Rangers will do our campaign.’ His prophecy turned true and MQM won majority in 2015 LG elections despite heavy crackdown.This has been the trajectory of MQM’s voters. They respond when they are pushed to the wall (n.b.this hypothesis is inapplicable to 2018 GE for many reasons which could be discussed in a separate piece).

Abidi was among few people who not only fought the case of Mohajir and Karachi, but also voiced for different ethnicities.For instance, he dared to show his open support for Pashtun Tahafuz Movement and campaigned against Rao Anwar. It was a rare sight when a parliamentarian from an urban centre raising the human rights abuse in Waziristan. It only shows his genuine commitment for the oppressed nations.

In 2015 when the former government was preparing Prevention of Electronic Crimes Act, Abidi was part of the standing committee. He did not only oppose the bill, but also engaged civil society organisations to pressurise the government to make changes in the vague worded draft.Although bill has become an act, he, with the help of civil society, was at least successful to make little amendments to this draconian act.

He was a people’s man.It would be an exception if he didn’t respond to members of his constituency.Even if he did, he had always made sure to call them back.In addition, his eatery, Biryani Of The Seas (BOTS), is a hive for activists, journalists and artists.BOTS was a place where Abidi used to invite people,even his opponents,for dialogue.Sadly, BOTS would be a different place now.

Since the start of 2018, Abidi envisioned a new, progressive and united MQM. He wanted to rebrand MQM as an umbrella organisation of those forces who fight for the due rights of urban centres of Sindh. He wanted to introduce politics of reconciliation among the city’s stakeholders

Now he is gone, many have this fear that who will they now call if there is any emergency such as abduction and detention of activists? Who will make calls on the behalf of an ordinary citizen?  Karachi didn’t only lose his son, but its people have been deprived of a support system.

One thing I must mention here otherwise it would be an injustice to Abidi bhai. It’s an open secret that he had a soft corner for Altaf Hussain and he would proudly defend it. He always used Urdu word mohsin (contextually, he meant mentor) for Altaf. When I last met him in Karbala on November 2nd, we discussed many issues and among them was Altaf Hussain. Abidi bhai said one can’t abuse or humiliate someone who taught you politics and brought you to the parliament from nowhere. If I can’t praise him, I won’t abuse him either.

This principle and moral position were also a reason of bitter relations he established with his comrades who were once very dear to him. For instance, he accidentally met a senior MQM member, whom Abidi always regarded as an elder brother,on the streets of Najaf. But Abidi was upset and avoided interacting with him because of the disrespecting attitude of his colleague had for Altaf from whom Abidi never expected. He reiterated to him that there is nothing wrong to have differences but treat one with respect who taught you everything.

For his principled politics, all three major parties had approached him and offered him different roles, but he politely rejected those offers. He often used to say that he had never thought what he would do without MQM.

However,since the start of 2018, Abidi envisioned a new, progressive and united MQM. He wanted to rebrand MQM as an umbrella organisation of those forces who fight for the due rights of urban centres of Sindh. He wanted to introduce politics of reconciliation among the city’s stakeholders.

I don’t know what will happen to MQM but Abidi was too young to leave and this loss is insurmountable for MQM, Karachi and its people.

The writer is an activist and researcher. Email: jafferamirza@gmail.com Twitter: @jafferamirza