Afghanistan: How does the Taliban make money? 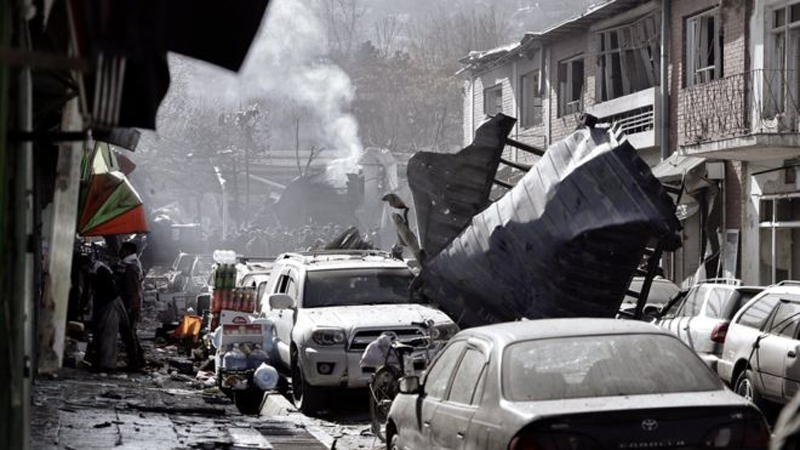 There are indications that the US is planning a significant withdrawal of its troops from Afghanistan.

American troops are in the country to support the Afghan government’s fight against the Taliban and other militant groups.

The Taliban, the main insurgent group in Afghanistan with an estimated 60,000 fighters, now controls more territory in Afghanistan than at any point since its removal from power by the US-led coalition in 2001.

Despite continued US military and financial support for the government in Kabul, the conflict has become both more intense and more complicated.

Maintaining this level of insurgency requires a great deal of funding, from sources both within and outside the country.

So how does the Taliban support itself?

How wealthy is the Taliban?

The Taliban ruled Afghanistan from 1996 to 2001, imposing a strict version of Sharia law.

Since its fall from power, it has maintained a long-running insurgency across the country.

Tracking flows of funding is often a matter of informed guesswork and the secretive militant organisation does not publish accounts.

But BBC interviews carried out inside Afghanistan and abroad indicate the group is running a sophisticated financial network and taxation system to pay for insurgent operations.

The group’s annual income from 2011 onwards was estimated to be $400m (£316m). But it is believed to have significantly increased in recent years and could be as high as $1.5bn.

The Afghan and United States governments have sought to constrain these networks. A little over a year ago the US army embarked on a new strategy of bombing drugs labs.

However, the Taliban’s income derives from far more than just the drugs business. The UN in 2012 warned against the general perception that the poppy economy in Afghanistan is the main source of Taliban income.

Afghanistan is the world’s largest producer of opium.

With an estimated annual export value of $1.5-$3bn, the opium poppy is big business, supplying the overwhelming majority of illicit heroin worldwide.

Although there is some cultivation in government regions, most of the poppy growing takes place in areas controlled by the Taliban and is believed to be an important source of income.

The Taliban earns money from taxes imposed at several stages of the process.

A 10% cultivation tax is collected from opium farmers.

Taxes are also collected from the laboratories converting opium into heroin, as well as the traders who smuggle the illicit drugs.

Estimates of the Taliban’s annual share of the illicit drug economy range from $100m-$400m.

As part of the Trump administration’s more aggressive counter-insurgency strategy in Afghanistan over the past year, the US renewed its focus on targeting the Taliban’s financial networks and revenue sources, including the drugs labs where opium is converted into heroin.

The US military says 60 percent of Taliban funding comes from narcotics.

By August 2018, the US claimed to have destroyed around 200 of the estimated 400 to 500 Taliban drug laboratories in the country, nearly half of them in southern Helmand province.

It was also claimed that the air campaign wiped out around a quarter of the Taliban’s revenue from the opium trade.

But the longer-term impact of this campaign is far from clear. Even when laboratories are destroyed, they are cheap and quick to rebuild.

The Taliban usually denies its involvement in the narcotics industry and takes pride in the total ban on poppy cultivation during its regime in 2000.

A BBC investigation published at the start of 2018 found that the Taliban had an active presence in 70 percent of Afghanistan.

In these areas, it has sought to maintain its taxation regime.

In an open letter earlier this year, seen by the BBC, the Taliban’s Financial Commission warned Afghan traders transporting goods to pay their taxes when travelling through areas it controlled.

It also draws revenue from businesses such as telecommunications and mobile phone operators.

The head of Afghanistan’s Electricity Company told the BBC earlier this year that the Taliban was earning more than $2m a year by billing electricity consumers in different parts of the country.

There is also income generated directly from conflict. Each time the Taliban captures a military post or an urban centre, it empties treasuries and seizes scores of weapons, as well as cars and armoured vehicles.

Afghanistan is rich in minerals and precious stones, much of it under-exploited as a result of the years of conflict. The mining industry in Afghanistan is worth at least an estimated $1bn.

Most of the extraction is small scale and much of it is done illegally.

The Taliban has taken control of mining sites and extorted money from ongoing legal and illegal mining operations.

In its 2014 annual report, the UN Analytical Support and Sanctions Monitoring Team said the Taliban received more than $10m a year from 25 to 30 illegal mining operations in southern Helmand province.

A snapshot of the Taliban operation in eastern Nangarhar province sheds a light on how they operate. The governor of the province told the BBC that around half the revenue from mining in his region goes to either the Taliban or the Islamic State group.

He estimated that they take up to $500 from each of the hundreds of mineral trucks leaving the province daily.

According to the Taliban, local traders and Afghan government officials we spoke to, the Taliban now receives more than $50m annually in revenue from mining all over the country.

Several Afghan and US officials have long accused several regional governments of giving financial aid to the Afghan Taliban, a practice they frequently deny.

Private citizens from Pakistan and several Gulf countries including Saudi Arabia, the United Arab Emirates and Qatar are considered the largest individual contributors.

Although impossible to measure, these sources of funding clearly provide a significant proportion of the Taliban’s revenue, and according to experts and officials could be as much as $500m a year.

These links are long-standing. A classified CIA report estimated in 2008 that the Taliban had received $106m, from foreign sources, in particular from the Gulf states.