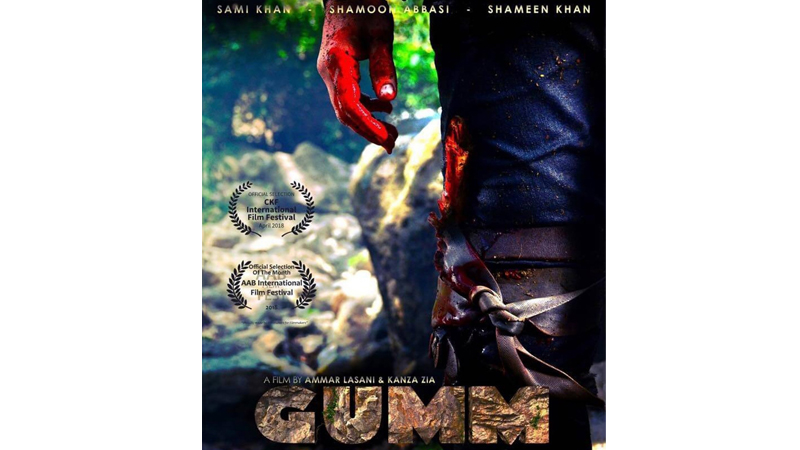 The directional debut of duo Ammar Lasani and Kanza Zia’s ‘Gumm’ starring Sami Khan and Shamoon Abbasi hints at talent in reserve this country possesses. The official trailer of the movie exhibits a plot as to how a directionless youth could eventually culminate at a dead end due to the wrong decisions.

Hitting the cinemas on January 11, 2019, the trailer shows glimpses of Asad (Sami) and Haider (Shamoon) playing lead roles in this thriller movie picturised in the dense jungles near the footsteps of Kashmir.

The trailer starts with a depiction of Asad’s character where he affirmatively boasts in response to “kaun ho tum, badmaash?” falling in love with Dua (Shameen Khan). Somehow this “badmaash” ends up stuck in the middle of a jungle in the aftermaths of a bank heist holding onto big cash bag and a gun while trying to recollect the preceding events when he asks, “mera naam kya hai?” Ok, now we have to wait for the movie release to know if Haider (Shamoon) while saying “everybody has a chance to fail and I was that chance for you” could really prove to be that missed chance for Asad or maybe there is a twist in the tale?

Overall, it’s a great appetizer which succeeds in portraying most of the angles in the 140 odd second-long timeslot. The intelligent capture and use of natural landscapes in this thriller would try to keep audience on the edge of their seats.

If you think that all is well with this trailer, well it’s not. The songs could not justify their inclusion. Skipping the songs entirely would have been a wise option as a thriller does not have to be a ‘The Sound of Music’. Hopefully, the gripping intensity within the movie may offset the need of unnecessary “thumkas” and the movie will sell itself off on its principle ingredient i.e. to thrill.

Bagging several international awards and acclamation in best movie, best screenplay, best director and best actor categories, ‘Gumm’h as already ticked most boxes as far as hitting the benchmark is concerned. How the public react to it in Pakistan remains to see. However, choosing a different genre for the local market is a brave move and fortune always favours the brave.

Noor Akbar Chishti is a business graduate and a lover of art, culture, history and cinema. He writes reviews as a freelance to contribute to the Industry and can be reached at nakbar@khi.iba.edu.pk.